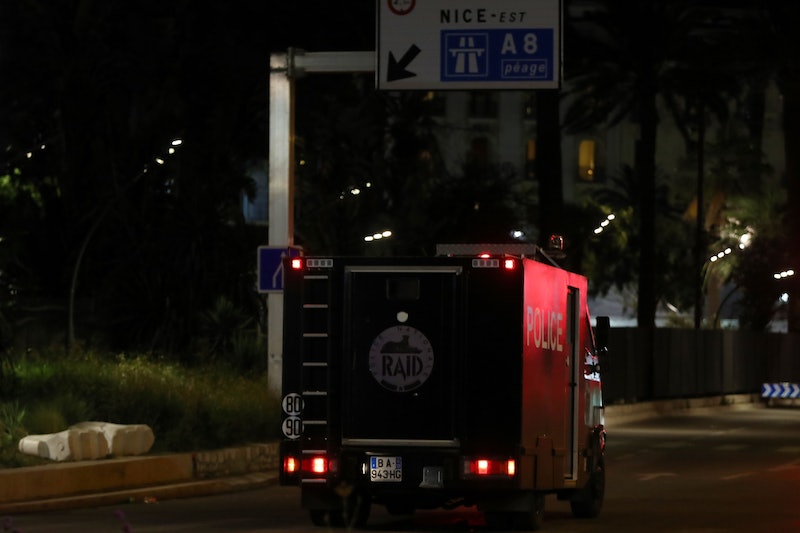 Earlier: In another tragic event in France, a truck crashed into Bastille Day celebrations in Nice, with initial reports estimating at least 30 people dead and 100 injured, according to Reuters. Photos from the Bastille Day attack show a gruesome scene, with injured bodies strewn across the street and debris everywhere. Onlookers said that the driver plowed into a crowd of people who were toasting the French holiday in the seaside town, driving very fast along the Promenade des Anglais before striking the victims. He was then shot dead, reports say. The region's mayor, Christian Estrosi, said that the vehicle was filled with grenades and other weapons.

One witness told NBC news via Twitter, "White truck literally racing through crowds of all ages. People either caught in path or forced to jump onto rocks over beach barrier. Some dead. Horrific." A Nice native named Wassim Bouhlel told the Associated Press that there was "carnage everywhere."

Mere hours before the attack, French President Francois Hollande had said that he would not be extending the official state of emergency that had been put in place after the November terrorist attacks in Paris and was set to expire on July 26, saying that "it would make no sense" to extend the state of emergency indefinitely.

Images from the scene show policemen, emergency vehicles, and the truck in question riddled with bullet holes.

Others show more police heading to the scene.

Lots of armed police are swarming the area.

It is indeed another sad day for France.

Editor's Note: This article has been updated to meet Bustle's editorial standards.

More like this
How To Fight For Reproductive Rights, Based On How Much Time You Have
By Courtney Young
Manchester Arena Attack 5 Year Anniversary
By Ella Glover
Rebekah Vardy & Coleen Rooney’s Trial Has Officially Begun
By Bustle UK
Twitter Was Saying The Same Thing About Sam Ryder’s Surprising Eurovision Result
By El Hunt
Get Even More From Bustle — Sign Up For The Newsletter