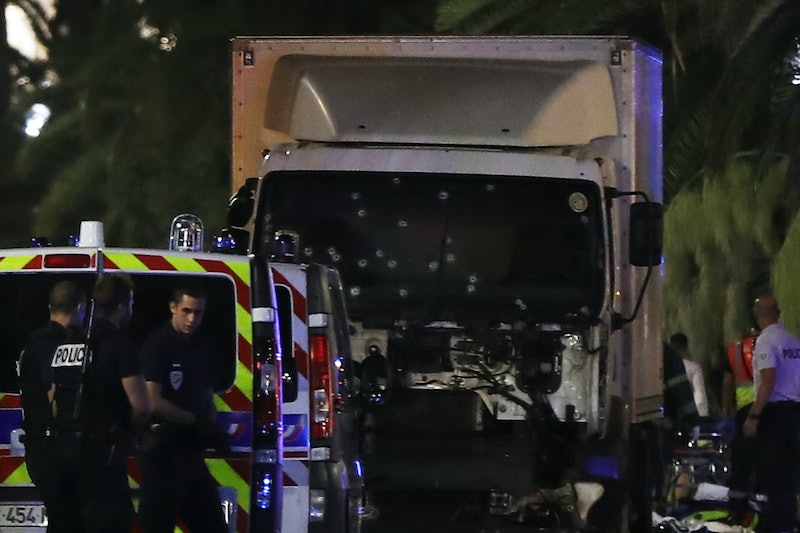 Earlier: Very sad and scary news coming out of France. Thursday night, a Bastille Day celebration in Nice, France was disrupted by an alleged terrorist attack. According to NBC News, a truck plowed into pedestrians during a celebration on Promenade des Anglais — and according to a tweet from Fox News, 73 people are reported dead, and at least 100 have been injured during the event. Reports also state that the driver of the truck was reportedly killed in a gunfight with the police while a second gunman escaped, and there may have been gunfire at a Nice hotel and restaurant as well. After the terrorist attacks in Paris, France, in November 2015, the country has been in a state of mourning and high alert — and the events in Nice are a devastating turn of events. In light of Thursday's tragic events, many may now be wondering when the last time Nice, France suffered an attack. Making this even more devastating though is that, for Nice, this is a rare event.

Fortunately, Nice has not been targeted for terrorism prior to these events in the same way that Paris has in recent years. On Jan. 7, 2015, a massacre was committed at the Paris office of satirical magazine Charlie Hebdo — and tragically, 12 people were killed in the attack. Two days later, a man connected to the Charlie Hebdo attackers killed four Jewish hostages at a kosher grocery store and shot down a police officer. On Nov. 13, 2015, there was another terrorist attack on Paris, this time with attackers killing at least 130 people across six locations in the city using assault rifles and explosives.

Nice, a less populated, quieter seaside city, has not been the target for a large-scale terrorist attack in recent years, though one attack on residents of Nice did occur in February 2015, shortly after the Charlie Hebdo attack. According to The Telegraph, a man wielding a large knife attacked three French soldiers outside of a Jewish community center in Nice. The soldiers’ injuries were described as not serious and the man was arrested. No connection was found between him and the Paris gunmen.

Though Nice has not had the same recent history of violence as Paris, with or without this history, these attacks are still devastating.