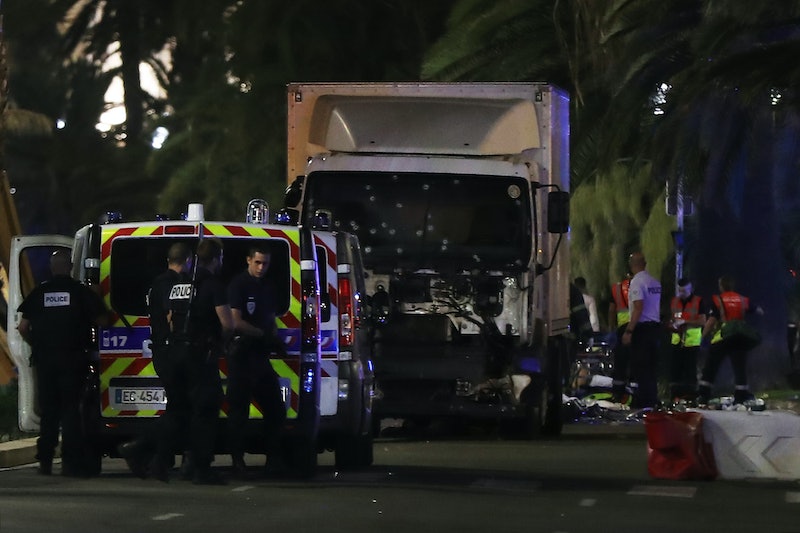 Update: According to the latest reports, at least 84 people were killed in the attack in Nice, France, and over 180 are injured. Of the wounded, François Hollande, the president of France, said on Friday there are 50 victims “in between life and death." After an emergency meeting of French security and defense officials, Prime Minister Manuel Valls said: "Terrorism is a threat that weighs heavily upon France and will continue to weigh for a long time. We are facing a war that terrorism has brought to us." Among the victims, who were celebrating the French holiday of Bastille day, were a number of tourists, including two Americans, Sean Copelend and his 11-year-old son, Brodie. To help victims of the Bastille Day attack, you can contribute to verified fundraisers or donate blood.

Earlier: Thursday night, hundreds of people came together to celebrate Bastille Day in Nice, France, when a truck crashed into the crowd on Promenade des Anglais in the city, and reportedly killed dozens. In the aftermath, the hashtag #PrayForNice erupted over Twitter, causing many to share their condolences and thoughts across the platform. While these tragedies often bring up a difficult discourse on how to react in the wake of such horrifying events, this one tweet about the Bastille Day attack will challenge the way you respond to tragedy.

Hank Green, mostly known to the internet as one half of vlogbrothers — a popular YouTube channel he started with well-known author and brother, John Green — tweeted a salient point regarding what happens in the hours that follow a massive tragedy such as this one. As modern media allows for an over influx of content and information, it's easy to get wrapped up in the latest and most breaking news — but Green explains that unfortunately, by now, he knows the cycle all too well. What's more, he knows that it's not healthy for him to witness. Green wrote, "Sadly, I now have procedure for handling tragedy like this. Disconnect, wait 24 hrs for real information. Breaking news is unhealthy for me." He then succinctly followed that thought up with, "Feel for victims, feel my own emotions, but do not attempt to analyze or fact-find. #PrayForNice"

As Green makes clear, it's a regrettable fact that, at this point, we've all grown used to what happens in the aftermath of a disastrous event — and how, we, as both a collective unit and as individuals, react. Green's learned to disconnect for the first 24 hours as he awaits what he calls "real information," stating that it wouldn't be in his best interest to tune into "breaking news." While some might be taken aback by that, there's validity to what he's saying. During this time, it's easy for us to jump to conclusions, to try to make sense of things and eventually lead each other down rabbit holes of false facts and misinformation.

In the interim, Green suggests something that's rather burdensome for us to swallow: feeling. And not just for the victims, though that's irrefutably important, but for ourselves too. Permitting ourselves to process what's going on and sit with our own thoughts before lashing out and placing blame might allow us to actually make progress and have real conversations about these issues.

By sharing his "procedure" Green's imploring us all to feel first and analyze second. It's a lesson that has the power to extend beyond today's horrendous events. As we wade the murky waters of how and why this happened, let's try to take a note from Green. Feel first — for the victims, for the world, for each other. Analyze second.