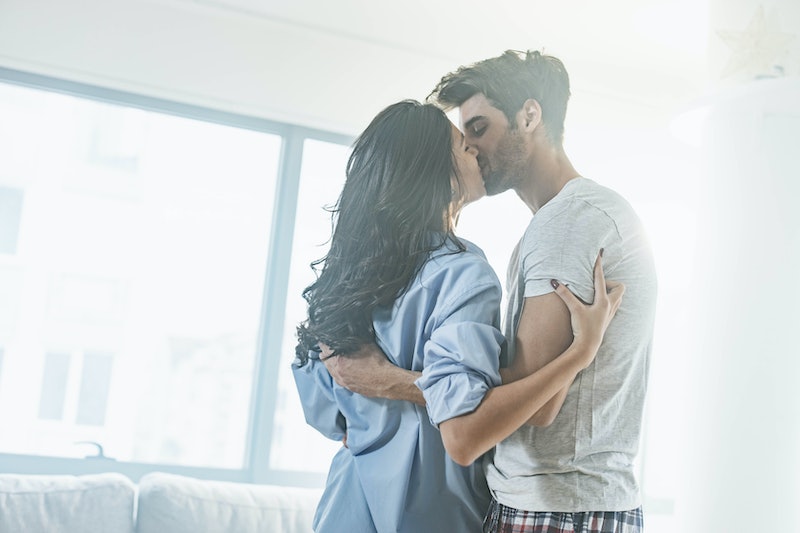 He didn't exactly hit the mark on everything, but Sigmund Freud had a point when he said, "The behavior of a human being in sexual matters is often a prototype for the whole of his other modes of reaction in life." If you have an anxiety disorder, you're probably nodding your head furiously in agreement right now. Anxiety's reign is far-reaching, and it affects everything equally, from your friendships to your sex life.

Approximately 42 million American adults suffer from some kind of anxiety disorder, such as generalized anxiety disorder (GAD), post-traumatic stress disorder (PTSD), and panic disorder. That's over 18 percent of the population whose lives (and sex lives) are affected by this particular branch of mental illness. It's important to remember that many victims of sexual assault are later affected by PTSD and anxiety, both of which have a tremendous effect on any future sexual encounters. Even those with anxiety who haven't been assaulted often find that their sex life is quite different than those who don't have a mental illness. No matter what, sex is complicated. It's just that it gets more complicated when you throw anxiety into the mix.

Here are seven ways sex is different when you have anxiety.

Try: The Fear of Intimacy: How to Overcome the Emotional or Physical Intimacy Issues in Your Relationship or Marriage , $3, Amazon

1. You Tend To Mull Over Sexual Experiences Long After They're Over

One thing every person with anxiety is good at is worrying. We worry long and hard about everything that happens to us or will happen to us, no matter how insignificant it might seem at the time. Most of the time, sex is a big deal, so it's one of those things that will take up headspace long after it's over.

You run through the scenario in our head over and over again, going over every single detail. You wonder what that sound meant, whether that smell was obvious, and if you should have done anything different. But, hey, it comes with the territory. If you stay up at night ruminating over that meeting at work, you'll probably spend time contemplating the last time you and your partner had a roll in the hay.

2. It Can Be Extremely Difficult To Be Open About Your Sexual Needs

In any kind of relationship, communication is key. It's especially important when sex is part of the picture, because sometimes the things we like or dislike in bed can't only be said through physical touch. However, this kind of everyday communication often doesn't come easily to people with anxiety. Things get mixed up in our heads and the simple act of speaking can feel impossible when we're under pressure.

It can be particularly embarrassing to talk about our sexual needs, since it's a sensitive topic that doesn't get spoken about as openly as other things in a relationship. Instead, we put in the vault, hoping there is a moment in the future when we feel comfortable and safe enough to bring it up without getting laughed at.

Basic social interactions that come seamlessly for everyone else tend to make anxious-ridden folks exceedingly nervous. Just attending a dinner party can make your anxiety skyrocket, so the mere thought of a one-night stand, and all the flirtations and games that go along with it, kind of freak you out.

You don't know if there should be any established ground rules and what the protocol is for texting the next day. You get so concerned about the ins and outs of the whole thing that it ends up causing you more stress than it does pleasure. Suddenly monogamous relationships don't sound so bad.

Your libido is a complicated thing that's influenced by all sorts of factors in your life. One big player in particular is your stress level. If you're feeling particularly anxious or mentally distracted, it's probably harder for you to get hot and bothered than it would if you were at your best. In some cases, anxiety can actually lead to sexual dysfunction. Men can't get hard and women can't get aroused as easily. This is also more likely if you're taking anti-anxiety medication that harbors certain side effects.

If you've got anxiety and any of this sounds familiar, speak to a trusted medical provider and see what can be done to up your libido, because engaging in healthy sex is part of your wellbeing. Also, be honest with your partner about what you're going through. If they're the right person for you, they'll understand without any judgment attached.

5. It Can Be Very Difficult To Reach Orgasm

Anxiety disorders have been associated with sexual dysfunction since the beginning. If we're nervous about putting in our coffee order, you can bet we'll get wildly nervous about orgasming with a sexual partner. There are so many different emotional, physical, and psychological factors that impair our sexual response, so it's not that we don't want to orgasm or that the sex isn't good. It's just that there are times when our bodies simply don't allow us to get there.

Women with anxiety often either have trouble getting aroused in the first place or they can't reach climax towards the end, creating a vicious cycle of worry. We have anxiety, then we can't get wet enough, then we have even more anxiety about our sexual performance, which just leaves us in a huge ball of hyper-anxiety.

Pregnancy is a primary concern for any woman having sex who doesn't want a kid running around anytime soon, but for people with anxiety, it's a nightmare. We worry about it so much that we make up all these far-fetched scenes in which we could become surprisingly pregnant. We even consider the possibility of immaculate conception. This keeps us up at night, sick with worry. It can also make it difficult to date on the regular, since we're too scared that any casual encounter will turn into last-minute sex and thus a startling pregnancy. We do our best to wade through the fear, though, just like we do in every other part of our anxiety-ridden life.

Many women who have an anxiety disorder have it because they've experienced previous trauma in their lifetime. Even if they've gone through treatment, the residual aftermath of sexual assault will never completely go away. There may be times when a certain kind of physical touch elicits an involuntary response, causing you to turn away from the situation altogether.

This can also be the case for people who are acutely anxious when they're having sex with their partner. A particular touch may inexplicably trigger you to feel unsafe or simply not interested in sex at the moment. There's no rational explanation; you just know how it makes you feel. The best way to move forward with it is to be honest with your SO about what you're experiencing, and to seek help if you feel you need it.