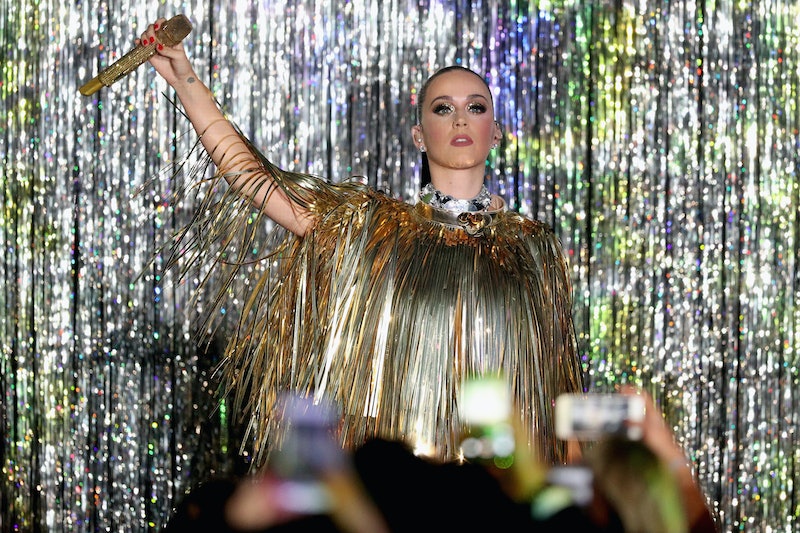 Although there are instrumental songs that are synonymous with NBC's coverage of the Olympic Games, NBC has partnered with pop superstar Katy Perry for the 2016 Rio de Janeiro Olympics with a new inspirational anthem. Perry released the song "Rise" on July 14 and based on the lyrics, it's all about the resilience of the human spirit. The single, only available to listen to through Apple Music or to purchase through iTunes as of its release, will be used by NBC for the promotion of the Olympic Games, as well as during their coverage of the actual games, which starts on Aug. 5 with the opening ceremony. Yet, in these times of national and international crises, the "Rise" lyrics resonate far beyond the Olympic Games.

Perry already proved with her 2013 single "Roar" that she can pen a catchy song about not being defeated and there are certainly similarities between the lyrics of "Roar" and "Rise" with a "claw your way back to the top" message. However, her Olympics song has a much more solemn tone — and that was intentional on Perry's part. As she wrote in a statement about "Rise" on her website:

This is a song that's been brewing inside me for years, that has finally come to the surface. I was inspired to finish it now, rather than save it for my next album, because now more than ever, there is a need for our world to unite. I know that together we can rise above the fear — in our country, and around the world. I can't think of a better example than the Olympic athletes, as they gather together in Rio with their strength and fearlessness, to remind us how we ALL can come together, with the resolve to be the best we can be. I hope this song can inspire us to heal, unite, and rise together.

With the first lyrics of the song being, "I won't just survive / Oh, you will see me thrive," it's obvious that while this song most definitely speaks to athletes, it transcends just the world of sports and can speak to any human facing an obstacle. Yet, that fierce competitiveness of the Olympics is the focus of "Rise" in the pre-chorus:

Oh ye of so little faithDon't doubt it, don't doubt itVictory is in your veinsYou know it, you know itAnd you will not negotiateJust fight it, just fight itAnd be transformed

The pre-chorus is the stuff that the last minute push to win a race is made of, embracing the "Cause I am a champion" lyrics of "Roar." But the actual chorus of "Rise" has some dark imagery that can speak to athletes and non-athletes alike:

When, when the fire's at my feet againAnd the vultures all start circlingThey're whispering, "you're out of time."But still, I riseThis is no mistake, no accidentWhen you think the final end is near; think againDon't be surprised, I will still rise

While the lyrics of the chorus embrace the spirit of competition and echo "You held me down, but I got up" from "Roar," based on Perry's comments that accompanied the release of the song, it also works as a universal message about how the world can unite to rise above fear and violence even when all hope seems lost. The chorus is particularly relevant when you consider the song was released on the same day that the horrific terrorist attack on Nice, France occurred.

Although the Olympic Games are a huge international tournament, they ironically and thankfully unite the world every two years. "Rise" will be the anthem for Team USA since the US network of NBC will be using it to advertise the games, but Perry's lyrics highlight the idea that people don't necessarily have to be divided in rising back to the top and the world can do it together.