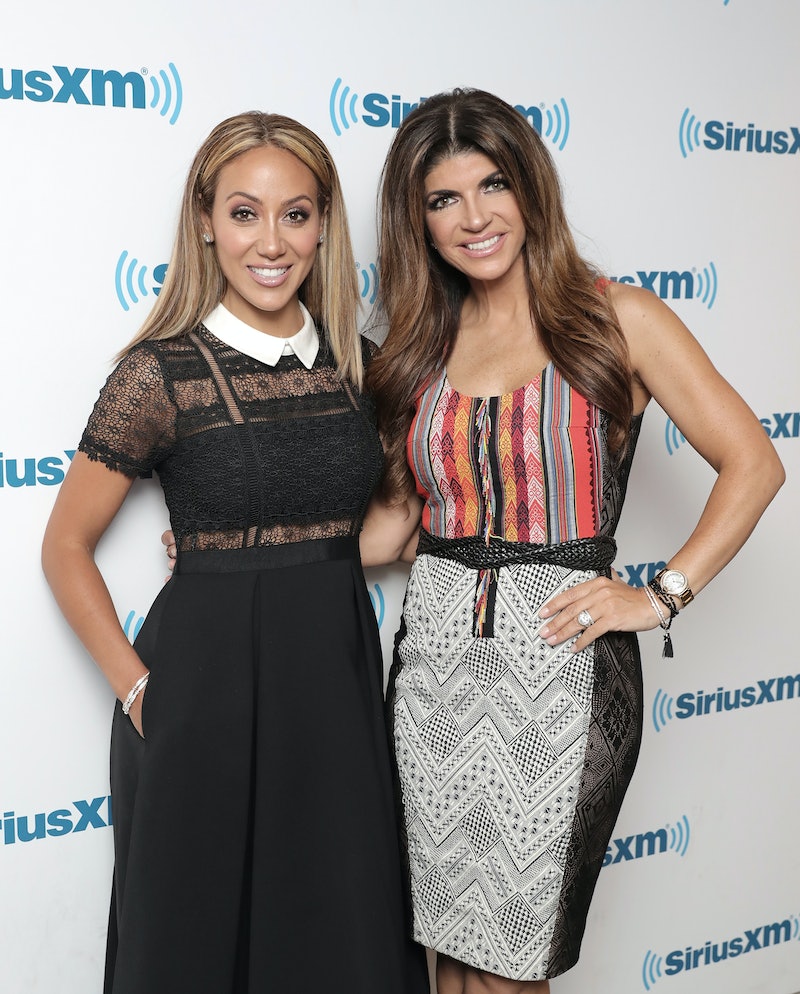 Here's further proof that the drama on Real Housewives continues off screen, too. During an interview with Access Hollywood Live, Teresa Giudice stormed out of the interview after being asked about Joe Giudice's possible deportation. Her sister-in-law Melissa Gorga was also present for the interview — and Giudice's walk off. Reporter Dave Karger asked the Real Housewives of New Jersey star, "Do you worry that it's the end of your family unit as you know it, because there is all this talk that Joe could be deported since he's an Italian citizen? Do you think about that?" That didn't fly with Giudice, who responded, "Um, next question please. I don't think that's something you should be asking." It went downhill from there and the awkwardness of it all is definitely showcased through Gorga's reaction.

Karga's co-host, Kit Hoover, jumped in and said, "Well everybody's talking about it, and it could be a reality." To which Giudice responded, "Yeah, no, I'm sorry. Sorry, I think that's really rude." Hoover replied, "OK, well it is a fact and we're probably going to see it on the show so I don't think that was a rude question." Giudice snapped back, "No, you're not gonna see it on the show."

Hoover then tried to move onto a different topic of conversation about Real Housewives of Orange County star Heather Dubrow, who commented on Giudice's post-jail attitude, but the Fabellini creator was over the interview by that point. Before answering the question, she declared, "As a matter of fact, I'm going to leave." That's exactly what she did. She got up from her chair and stormed off.

The only words that could escape Gorga's mouth were, "OK. OK, OK, OK." She also got up and left, which I guess just goes to show you that Gorga does indeed have her sister-in-law's back? As much of an impact as Giudice's walk off made, it's hard to tear your eyes away from Gorga as it all goes down. You know she's probably screaming on the inside and thinking, "Here we go again," but she surely keeps her composure, with a little smile escaping her, too. Overall, here's how Gorga was really feeling during the interview.

Giudice's rep/lawyer, James Leonard, commented on the incident with a statement released to People. Part of it reads,

Teresa was there to promote the new season of Real Housewives of New Jersey and the paperback release of her book, not to be asked a question like the one that was posed about this being the end of her family. She politely deflected the question and asked them to move on and they didn't, so she left. She was doing Access Hollywood, not 60 Minutes or a sit down with Barbara Walters. To see the host hi-fiving at the end of the segment as if she did something worthy of a celebration was absolutely taste less.

Leonard also said Gorga "absolutely supported Teresa walking off and walked off right behind her in a display of solidarity." During a Thursday appearance on NBC's New York Live, Giudice spoke directly about the Access Hollywood Live interview and, funnily enough, even commented on her husband's possible deportation by saying, "I'm not going to address it. It's nobody's business. It's a legal matter, and I'm not addressing it. So, if anybody asks me, going forward from here, I'm going to walk off ... so don't even try it. Because they'll just make it worse."

As for the deportation matter, after Joe's 41-month prison sentence for fraud, it was revealed that he could face deportation, according to E! News. Since he is an Italian citizen, and not one in the U.S., it appears Joe could be deported since he was convicted of an "aggravated felony," immigration attorney Michael Wildes told E! News. Such a felony is removable under the Immigration and Nationality Act. Wildes also added, "Joe's green card will not hold water."

However, Joe isn't worry about it all at the moment. In March, he spoke with People about being deported and simply said, "I'm not even worried about that as far as that goes. That, we'll worry about when I get out."