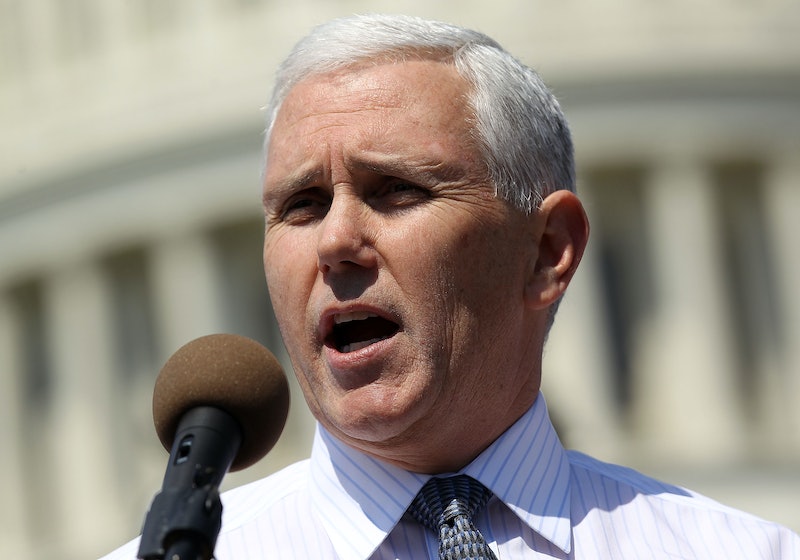 On Friday, despite claiming that his announcement would be postponed until the weekend in light of the deadly attack in Nice, France, real estate baron and presumptive Republican nominee Donald J. Trump announced his running mate: hyper-conservative Indiana governor Mike Pence, who'll be dropping out of his gubernatorial reelection to run for the second-highest office in the land. And, like always after a VP pick goes public, he's due a vetting from the American public. So, what does Mike Pence stand for, and what issues stick out in his record?

Make no mistake, this wasn't a pick designed to charm or convince a more-moderate general electorate. Pence is, as FiveThirtyEight's Harry Enten noted on Thursday, an extremely conservative vice presidential pick by recent historical standards. Even a severely conservative one, to borrow a phrase from Mitt Romney.

But what does he actually does Pence believe? In broad strokes, you could say he combines a pretty thoroughly conventional brand of Bush-era Republican economic policy ― namely, regressive individual tax cuts and lowered corporate tax rates ― with a record of stridency on issues central to religious and cultural conservatives, like reproductive rights, guns, and LGBT issues. Here's an idea of what kind of record he's bringing to the general election.

In 2005, Pence voted for a bill shielding U.S. gun manufacturers from lawsuits over misuse of their weapons (the same bill Bernie Sanders caught flak for supporting during the Democratic primary). He also backed creation of a national concealed gun carry framework, and co-sponsored the Firearms Interstate Commerce Reform Act, which would've loosened restrictions on licensed gun sales across state lines. And of course, Pence boasts that clear, straightforward seal of approval that every pro-gun Republican craves ― he's got an A rating from the National Rifle Association.

Mike Pence is extremely anti-choice, radically so in some respects. Throughout his career in politics, he's voted against embryonic stem cell research, in favor of banning U.S. aid going towards family planning programs abroad, and against allowing federal funds to be spent on abortion-related services. But perhaps most notably, he signed a hugely controversial law earlier this year that banned abortions in the case of fetal abnormalities, and required women to bury or cremate any fetal remains ― to hold a fetal funeral, effectively ― regardless of whether they had a miscarriage or an abortion. The law was ultimately blocked by a federal judge.

4. He Supports The Trans-Pacific Partnership (TPP)

Here's an awkward fact about Pence's record ― he's now the only candidate on either side (although Hillary Clinton's VP selection is still pending) who supports the Trans-Pacific Partnership, an Obama administration free trade agreement that became more or less poisonous on both sides of the primaries. Clinton previously supported it, but she changed course while tangling with Vermont senator Bernie Sanders, who strongly opposed it. Trump also strongly opposes the TPP, meaning that Pence is now the only person in the race who actually supports one of President Obama's final legacy projects.

5. He Wants To Cut Taxes For The Rich

Pence was a rock-ribbed supporter of the Bush tax cuts, and argued in favor of extending them in 2010. He also passed tax cuts as governor of Indiana that overwhelmingly benefited the rich of his state, as well as additional tax cuts for businesses, slashing Indiana's corporate tax rate. Simply put, he's a Republican in the traditional, Bush-era mold ― if you're living in a state or country where Mike Pence comes to power, you can pretty safely expect a round of corporate and upper-class tax cuts won't be far behind.