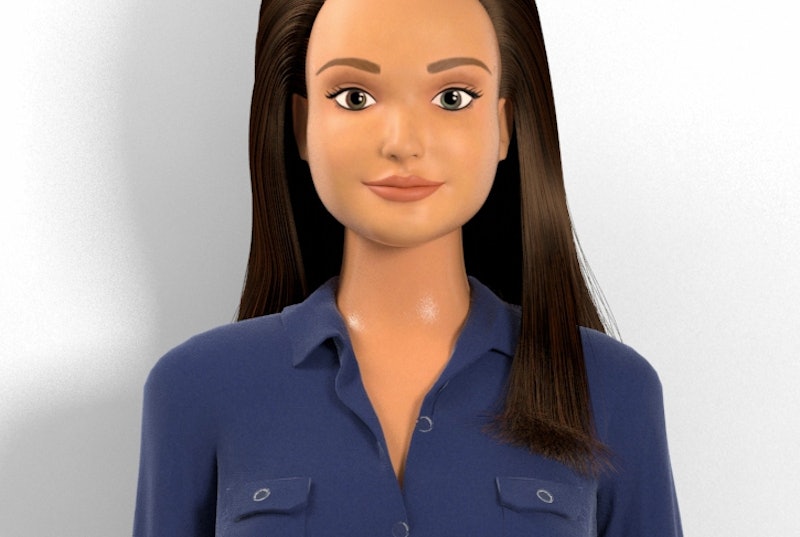 Remember that time that someone made a Barbie-like doll modeled on the proportions of an average 19 year old? And remember how that was awesome? Well, it's about to get even better, because "Average Barbie" might soon be coming to a toy store near you.

Nickolay Lamm, the artist and designer behind the "Average Barbie" image that went viral last year, says that one of the most common responses he heard was from parents who wanted to know where they could buy the doll. Looking to fill that obvious demand, Lamm has designed a new product, a doll that he calls Lammily, and he's currently crowdsourcing the funding to make and manufacture her.

Lammily, whose name does kind of grow on you, has fully articulated knees, ankles, wrists and elbows, which means that she doesn't just pose like a Barbie doll; she can actually move. Naturally, therefore, she has plenty of sports-wear outfits to promote an active lifestyle, and she also wears minimal make-up. And I cannot be alone in thinking this is awesome.

"I wanted to show that average is beautiful," Lamm says in the video on his funding page. And it's a great idea. Because even though little girls aren't thinking about body image when they play with Barbie, Barbie dolls still shape our ideas of what women look like, and what the ideal woman should be. Mattel can try to convince us until they're blue in the face that Barbie's proportions are just about easily taking her clothes on and off and have nothing to do with promoting a body image, but that doesn't mean that children aren't affected regardless. Which is why it's about time we got some alternatives.

Lamm has been working with a former Mattel executive who has offered to help him find the proper manufacturing facilities, if he gets the money to make this project a reality. Backers of the project who contribute $25 or more get an exclusive first edition Lammily doll with an outfit that will not be available for sale. Other prizes include posters or seeing your name on the Lammily packaging. And so far, people have been contributing. Which means good things for all of us.

In a world where Barbie models for Sport Illustrated and tries to pass herself off as a role model for girls, it's great to see a realistic, viable alternative toy for children to play with. Here's hoping Lammily gets the funding she needs and then some, and goes on to be just as popular, if not more so, than Barbie herself.