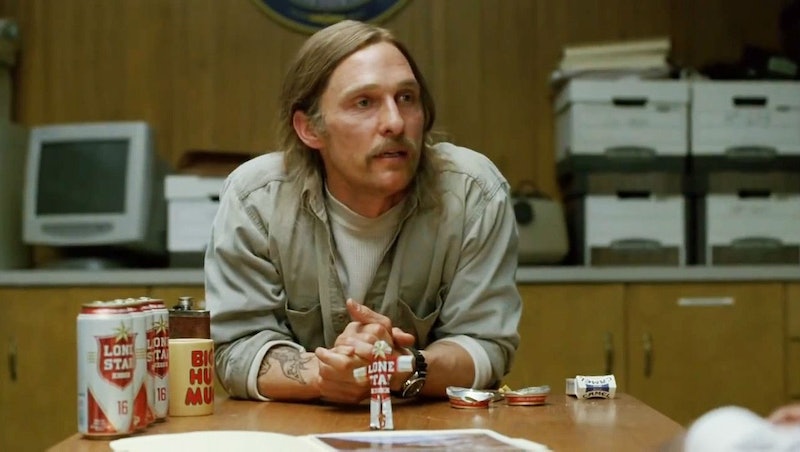 It's been an interesting Winter semester on television. Over on HBO, we've learned the philosophical rantings of one Rust Cohle (Matthew McConaughey) on True Detective, at times, struggling to understand why this babbling character was consistently spouting these winding truths. And at the same time, ABC provided the antithesis of all this heavy thinking with the biggest train wreck this side of Jersey Shore: Juan Pablo on The Bachelor .

In fact, Juan Pablo's been so unbearable, it got us thinking: could we replace Juan Pablo with literally any other seemingly insufferable person and instantly make the season better? And could that person be Rust Cohle? Hell, why not?

In this alternate universe, all the times Juan Pablo simply looked on blankly, kissed the pain away, or cooed "it's okay" to get whichever lady he was upsetting to simply shut her beautiful mouth are replaced by more words than any Bachelor contestant would probably ever want to hear. It's weird, it's kind of ridiculous, but believe it or not, Rust Cohle makes for a better romantic suitor than Juan Pablo -- not that it's all that difficult -- even with all that talk of being and nothingness. Plus, his chatter sure beats seven thousand reprisals of the "It's Okay" reprieve. Like Andi, if I have to hear those words one more time, I'll die too.

Yes, it's a gutter, Claire. And this guy is King of the Trash Heap. Run, Claire. Run like the freaking wind.

Probably would have made her final exit a little less teary, no?

UGH. FINE. Keep the bad men from the door. But also, stay away from me.

Wow. Way to throw our own superficiality back in our faces. Fine: we should have known JP was a cad. FINE.

Truer words have never been spoken. But maybe, after this season, let's try not to repeat the parts of our lives that include watching this insane show made to make women feel terrible about themselves in order to make one hot, super boring guy fall in love with them.

Then again, if the Bachelor was Rust, then at least we'd be able to drop the "super boring" part.