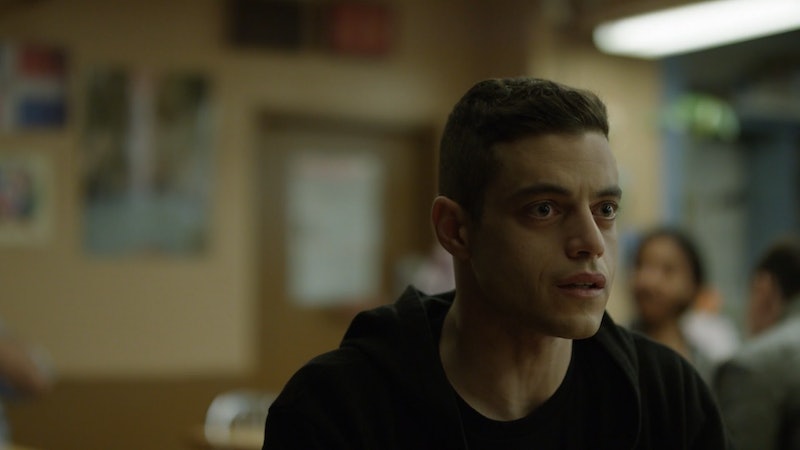 The two hour Season 2 premiere of Mr. Robot was the sort of confusing (in a good way!) and totally compelling viewing fans have come to expect from the hit hacker series. But given the number of narrative twists and turns that we all experienced during the first season of the show, there's one key change to the viewing experience this season round: This time, the audience is analyzing every tiny detail to try and stay one step ahead of series creator Sam Esmail. Which might be how the totally mind-boggling and entirely possible (Note: Spoilers ahead!) Reddit Mr. Robot prison theory came to fruition. Reddit user Extenso was quick to mistrust what's being presented to us as Elliot's peculiarly routine life living with his mother.

If you watched Episode 1 of Season 2, you know we're presented with the strangely regimented life Elliot Alderson is leading: his mother wakes him up early every day, he does chores, goes to church group, eats lunch and dinner with his "friend" Leon every day at the same time, watches locals play basketball in his neighborhood, sees his psychiatrist, and writes everything down in a journal. Extenso's observation of details such as "his room is very small and rectangular and he has no access to the internet, only a desk and his notebook," "every single one of his meals is scheduled. 8AM breakfast, 12PM lunch and 6PM dinner," and "he goes to a group 2 days a week" seemed to lead him to the totally stunning theory: Elliot, historically an unconsciously unreliable narrator (throughout Season 1, Elliot's delusions were often presented to the audience as reality), has actually been in prison for the E Corp hack at the end of Season 1, and we as the audience are only seeing either what he wants us to see or what he believes to be the reality of his life.

It makes sense, when you think about it. Elliot's routine is extremely regimented — and a lot of the behaviors Elliot is seen exhibiting are decided unElliot-like. For instance, of Elliot's "church group," Extenso writes: "This is another common thing in prisons for rehabilitation and again I would be surprised to find Elliot here willingly." Of Gideon's surprise visit, where he threatens to report Elliot to the feds who are suspecting him of the hack: "His visit from Gideon is very similar to a visit at a prison, they are separated and when there is some raised voices the mother/guard turns around immediately and asks what is going on." It all comes together to make a convincing case for this being the truth behind the new routine that hasn't been explained to us.

Longtime viewers of the show — you know as well as I do, this theory makes so much sense. In fact, other Redditors have jumped on the bandwagon and presented alternate versions of this theory — from suggesting Elliot knows full and well where he currently is and just doesn't want to tell us because he no longer trusts us (we knew about him being Mr. Robot before he did, after all, as Reddit user indyitt points out: "I think he believes we figured out Mr Robot was him before he did... He is unhappy we didn't tell him," and as user Tyrbus writes: "Elliot is perfectly aware of his situation. It's not that he doesn't know that he's in a prison/institution/etc, but that Elliot doesn't want to tell us that he's in a prison. He even tells the audience he can't trust us at the beginning of S2E1.") to suggesting that clues about Elliot's real surroundings are in every single one of his scenes. For example, Reddit user NewTown_BurnOut writes:

Eats every single meal with Leon in the same exact cafeteria/diner-looking place and never talks (who would hold this type of friendship unless forced), Leon only talks about television (what else is there for him to do?), intense basketball games as if in jail, Ray is a social worker (calm, diffuses fights, "my line of work"), the dog is a therapy dog (old, calm, trained to key in on people like Elliot), his mother is a guard/nurse that is assigned to him (she's the sternest person he knows and keeps him on routine)

Another point? The imagery used in the episode. Not only is Elliot constantly surrounded by bars in all of his scenes (bars on homes as he's walking down the street, bar imagery inside his mother's home, bars on the windows, etc.)...

... but his habit of eating meals in the same place, and of spending his day watching basketball (aka, like on prison grounds) also seem to back this up. Additionally, between scenes in different locations, things stay consistent. Compare the light fixture in psychiatrist Krista's office...

... to the one in Elliot's mother's dining room. It seems the same, oddly:

For what it's worth, that light fixture was not present in Krista's office during Season 1. (Kudos to Reddit user _FIREPOWER_ for spotting this!) Also, the outlets under the middle painting are in a different spot — in fact, instead of the two seen in Season 2's image, there's one.

While this is all very convincing, this isn't even the only argument for where Elliot is. Prisons aren't the only places where you're forced to adhere to a strict routine, have your visits monitored, and are forced into going to group sessions — psych wards are as well. Reddit user JBR152 observed: "On Hacking Mr. Robot, they asked Rami to use one word to describe his character this season and he said 'committed'." So, could Elliot possibly be in a psych ward? Vulture has been leading the charge on this one, arguing that Elliot's mother's strangely stilted greetings — from "time to get up" in the morning and then "see you in the morning" every night — indicate "the utilitarian, affectless interactions of someone in charge of monitoring and corralling patients." Another key piece of evidence Vulture present is that of "'local pyro' Hot Carla," who we don't know a lot about "but someone primarily identified by a dangerous mental illness could definitely be a person in a ward, too."

Of course, this could all be very blatant use of metaphors designed to demonstrate the mental prison Elliot feels he's in due to Mr. Robot's constant influence over him — but that's a whole 'nother conversation for a whole 'nother time. Let's be real: something is definitely up, and whether it's that Elliot is in a prison, a psychiatric hospital, or some variation on this, the truth will eventually reveal itself when it wants to. Hey — what's more fun in Mr Robot than its element of surprise?