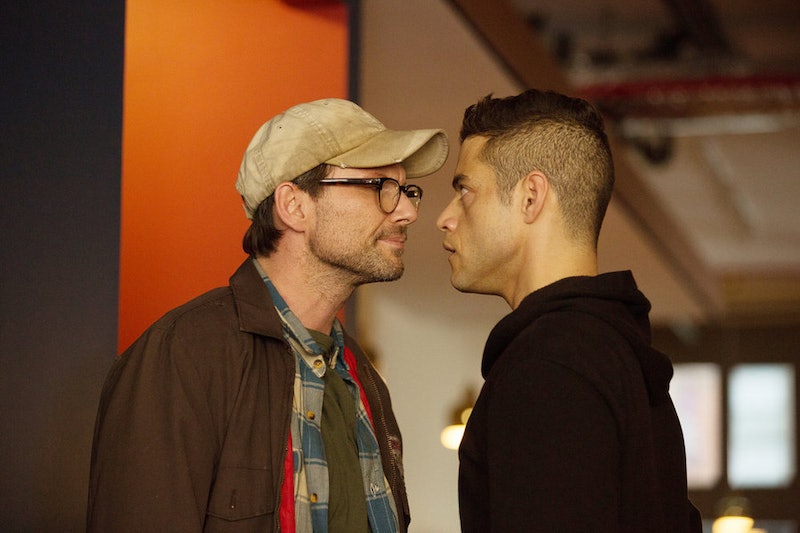 The revolution has begun on USA network's Mr. Robot . After nine episodes of the hacker group society working towards an attack on "Evil Corp" that would eliminate all records of debt worldwide, causing the greatest wealth redistribution in history, Elliot Alderson (Rami Malek) and his cohorts finally pulled it off... offscreen, between episodes, and Elliot can't even remember how. For viewers expecting Mr. Robot to adhere to traditional rules of narrative, society's success in the very first season of the show may have come as a bit of a surprise. Where does the series go from here? How will it depict the collapse and restructuring of American civilization? Well, Christian Slater has Mr. Robot Season 2 spoilers to clue us in.

"I, too, am equally intrigued and curious as to what society is going to look like," Slater, who co-stars as the titular hacker guru, tells Bustle. "Sam [Esmail, the show's creator], like Mr. Robot, is sort of keeping a lot of these secrets locked away himself. I've tried to talk to him a couple of times about it, but he's mulling things over, taking his time, and is excited to get back into the writers room and really start to put it all together." (If Season 2 follows the same schedule as Season 1, production on the new batch of episodes won't begin until April of next year.)

Now that Elliot (and the audience) knows the truth about Mr. Robot — namely, that he's a delusion that takes on the appearance of Elliot's dead father — what does this mean for Slater going forward? Will we perhaps be seeing less of his character, as Elliot tries to get a handle on his sanity? Or could this revelation perhaps mean even more screen time for Slater? (In the finale, Elliot specifically sought out Mr. Robot, despite knowing he wasn't real, to help him remember what had happened to a missing Tyrell Wellick.)

"'Elliot without Mr. Robot is like Bruce Banner without The Hulk,'" Slater says, remembering something Esmail told him when discussing Episode 9's game-changing twist. "Whenever Elliot is scared or backed into a corner or worried about something, Mr. Robot will intervene, come into play, take over."

Speaking of that game-changing twist... Just how many more like it should audiences be expecting? Going into the finale, many viewers were wondering exactly how deep Elliot's delusions went. Was Mr. Robot the only manifestation of the hacker's psychosis? Or would it be revealed that even more characters — his antagonist Tyrell, his sister Darlene, his fellow hackers at society — also only existed inside Elliot's mind? The Season 1 finale didn't directly address that question, but Slater says it's something viewers should continue to wonder about going into Season 2.

"I think this show does certainly ask people to ask that question: What is real? I loved my speech at the end [of the finale] where I said, 'We live in a world built on fantasy,'" Slater recalls. "I'm not saying the whole thing is in Elliot's mind, but the way he is perceiving things is definitely from a delusional point-of-view."

Slater himself may hold the key to answering the question of what exactly is real. "Mr. Robot, maybe to protect Elliot, is also keeping other secrets from him, which will be revealed over time," the actor teases about the future of the show. "Mr. Robot is keeping those secrets locked up tight in a vault somewhere, and will reveal them when he feels like Elliot can handle it, or when the time is right."

Part of what made Mr. Robot's twist so compelling was how it differed from other famous twists in movies and television. Whereas most plot twists, even when they come as a surprise, serve to clarify ("of course Bruce Willis was dead the whole time, it all makes sense now!"), Mr. Robot's twist does the exact opposite. Even though many viewers saw it coming, it takes what was formerly a relatively straightforward plot about hackers trying to bring down an evil corporation, and makes it infinitely more complicated, exploding the scope of what the show itself is about. Was that the sole ace up Esmail's sleeve... or should viewers be expecting even more twists in Season 2 that will continue to challenge our view of what Mr. Robot is about?

"There will certainly be more reveals, more challenges, more questions, more intrigue," Slater reveals. "The fact that a show called Mr. Robot has evolved into this young man's emotional journey, dealing with his struggles and all of these regrets and angers and emotions that he's been bottling up and keeping so isolated... I think that will be a struggle for him and a continual through-line for whatever seasons are to come."

Fortunately, Mr. Robot was renewed for Season 2 back in June before Season 1 even had its on-air debut — but after an early VOD release of the pilot had already started garnering rave reviews. That renewal was for "at least 10 episodes," which means there's a chance we could be getting a super-sized sophomore season; perhaps 13 or even 16 hours, in order to more closely match USA's other dramas like Graceland, Royal Pains, and Suits. I'm sure Mr. Robot fans wouldn't say no to such a proposition. Esmail may need that many episodes just to cram in all the twists and revelations he supposedly has in store for us.