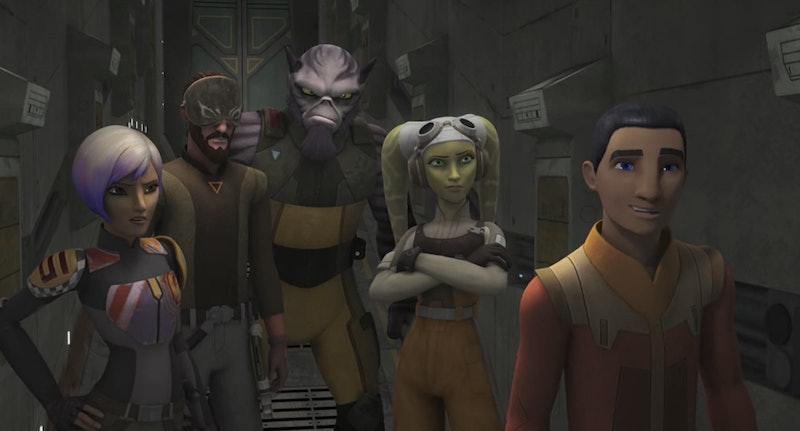 If you're in the market for Season 3 Star Wars Rebels spoilers, there's one destination you should add to the top to your to-visit list: the Star Wars Celebration 2016 event in London. The event was a bustling, exciting one — and there were a ton of plot points revealed for everyone's favorite Star Wars 3D CGI animated TV series, Star Wars Rebels at the panel discussion on the show, where executive producer Dave Filoni, who spoke alongside stars Tiya Sircar (Sabine) and Sam Witwer (Darth Maul and the Emperor on the show). The major revelation was just the sheer volume of new stuff there was (I mean, look at the number of spoilers in the title!). We've got everything from a major new character (who'll be very familiar to most of you) to character development to back stories to some juicy hair gossip. You heard me: hair gossip.

But hey, be nice. If your fellow Star Wars Rebels friends and fans aren't into spoilers, try and keep these juicy plot details and points about character development on the DL. After all, for some people the surprise is half of the fun and you won't make yourself popular with more tentative viewers if you reveal everything at once. Still, for the spoiler-hungry, go right ahead...

In the clip shown, Kanan is sporting a samurai-inspired mask — and according to co-creator and EP Dave Filoni at the Star Wars: Rebels panel at Star Wars Celebration 2016, Freddie Prinze Jr is a fan. Also mentioned at the event was the fact Kanan also has a scar across his eyes. Presumably he's seen further combat: is the mask there to disguise the scar from his enemies and make him seem less vulnerable? Possibly.

2. Ezra Has A New Haircut

Apparently "people hated his Aladdin hair," according to Filoni, so his 'do has been given a redesign.

3. He's Not The Only One — Sabine's Hair Has Also Changed

Simple but effective: they've changed the character's hair color to white into purple.

4. As Has Her Character Development — We're Going To Learn More About Sabine

Apparently, this will be the season Sabine has to face up to her past.

5. Sabine Will Also Get Some Great New Gadgets

There will be "altercations" which will require Sabine to get her hands on some amazing new gadgets including a jetpack. What else would you expect from our resident weapon expert? According to voice actor Sircar, "I have been wanting a jetpack since I found I played a Mandalorian." Season 3 will be the season all Sircar's dreams come true.

6. As Well As One Very Special Weapon Indeed

An image was also shown at the event of Sabine holding the darksaber. This was the black-bladed lightsaber stolen from the Jedi Order by the Mandalorians.

7. A Former Doctor Who Will Be Voicing A New Character

The fourth Doctor from Doctor Who, Tom Baker, will be voicing Bendu. Here's what was relayed about the character at the convention: he's neither good nor evil, but "middle way of the force; he's not dark, he's not light, he's something else."

8. Bendu Will Be Like No Character You've Seen On The Show Before

We also learnt that "he's going to make a big difference for the world of rebels" because "he's a different type of character than we've seen before."

9. Hara's Got A New Accessory To Stress Her Importance

Hara wears a rank badge now to show she's more a part of the rebellion.

10. The Rebels World Will Match Up More With Rogue One

The upcoming movie Rogue One: A Star Wars Story will share the same time period as Rebels (the era between Episode III and Episode IV). As such, the worlds will begin to match a bit more in color and style.

11. Darth Maul Will Be Searching For Meaning

According to executive producer Filoni, "Darth Maul is now coming to terms with what his life is ... he's searching for a purpose ... he's fallen several times from that place ... he'll never truly be good unless he can find a selfless resolution."

12. Darth Maul Sees Something In Ezra

According to Filoni, Maul sees a lot of potential in Ezra: "He thinks of Ezra has his apprentice as a kid who has a little potential, but is just a bit misguided ... he could achieve everything that Maul tried to achieve ... he's looking for a brother of some sort."

13. Despite His Search For Meaning, Darth Maul Will Be Selfish

Filoni continued "He sees the opportunity to pass on a legacy ... but it's done from a selfish motivation, but he doesn't see that."

14. There's Going To Be An Important New Villain: GrandAdmiral Thrawn From Heir To The Empire

Everybody. Stay. Calm. Rebels has a major new villain and it's Grand Admiral Thrawn, the Imperial military commander and incredible tactician who took over the last scraps of the Empire in the Expanded Universe as related in Timothy Zahn's Thrawn Trilogy and most notably in the 1991 novel, Heir To The Empire.

15. This Character Was Hard To Cast

Thrawn was considered "one of the most challenging characters ever to cast." Still, they did a great job. He's being played by House of Cards star Lars Mikkelsen and from the footage in the trailer, the actor seems perfect.

16. Which Is Funny, Because Lars Mikkelsen's Brother Hannibal Star Mads Mikkelsen Is In Rogue One

What I wouldn't give to be a fly on the wall at the Mikkelsen residence this holiday period. Mads Mikkelsen confirmed at the Rogue One the previous day that he does, in fact, play Jyn Erso's father.

17. The Trailer Also Reveals Wedge Antilles Will Be Making An Appearance

An Imperial pilot who could possibly be switching sides is referred to as "Wedge," and that could only be Mr. Antilles from the original Star Wars trilogy.

The last we saw of Ahsoka, she was battling it out with Darth Vader at the end of Season 2. At one point in the panel, Filoni was asked by a young fan is Ahsoka would return as a force ghost and he said, “It’s likely that you might not have seen the last of Ahsoka Tano.”

If you were wondering if her survival might be thanks to her becoming a force ghost, that's been ruled out. Filoni said she isn't at the skill level to know how to manifest herself after death in a force ghost, and that he doesn't believe she will ever be a force ghost.

Wow. So, so many spoilers — but less spoilers and more like appetizers, because they've just made me hungrier for the new season.

More like this
A New 'And Just Like That' Table Read Pic Confirms A Key Character's Return
By Jack Irvin and Grace Wehniainen
'Succession' Season 4 Will Be An "Absolute Banger" According To Cousin Greg
By Bustle Staff
This 'Gossip Girl' Wardrobe Error Has Gone Viral On TikTok
By Alyssa Lapid
Mollie Gallagher Has A Deeply Personal Reason For Taking Up Skating
By Maxine Harrison
Get Even More From Bustle — Sign Up For The Newsletter
From hair trends to relationship advice, our daily newsletter has everything you need to sound like a person who’s on TikTok, even if you aren’t.