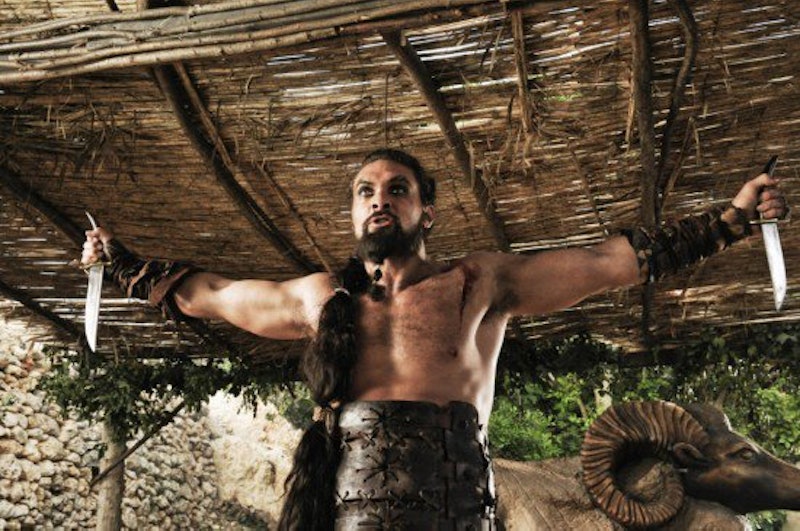 When we're stuck in the horrible, terrible time in between seasons, and HBO isn't sharing any promotional content with us for the next season, that is the appropriate time to begin plotting your outlandish Game of Thrones theories. There's crazy theory after crazy theory — that Varys is a mermaid, that Bran is the embodiment of Melisandre's boy, Lord of "R'hllor" Light, and that Meera Reed is actually Jon Snow's twin. But the zaniest one I've heard yet is one that comes from Redditor MrMasochist: Khal Drogo is Azor Ahai, the messianic mythical hero of Westerosi lore. The craziest thing? It actually kinda makes sense.

The theory, which comes from the Song of Ice and Fire series, argues that Mirri Maz, the witch lady who semi-killed Drogo, prophesied to Daenerys that Drogo will return,

when the sun rises in the West and sets in the East, when the sea goes dry and mountains blow in the wind like leaves, when your womb quickens and you bear a living child...

The poetry of the post aside, even the concept of Drogo returning from the dead makes him Azor Ahai-esque. Melisandre has claimed Azor Ahai, the figure who used to have a flaming sword and fight baddies, will be reborn amidst smoke and salt, wielding the flaming sword Lightbringer to defend the world from R'hllor's nemesis, the Other. So anybody coming back to life is an Azor Ahai contender, and, though Drogo hasn't come back yet, he's definitely got the dead person thing down pat.

Now, let's delve into the actual words used — "when the sun rises in the West and sets in the East"— which, our Redditor theorizes refers to a Dornish character featured only in the George R.R Martin series: Quentyn Martell. The sigil of Dorne is the sun, so the fact that Quentyn shows up in Westeros (the West) and then heads to Essos (East) to unsuccessfully free Daenerys' dragons only to actually get eaten by them (AKA sets like the sun) could mean that he is the "sun" from this prophecy.

Then, "when the sea goes dry" could possibly refer to the Dothraki Sea, which, Daenerys notes in her final chapter in A Dance With Dragons, has succumbed to some sort of drought and is dying off.

Our next part of the quote is "when mountains blow in the wind like leaves," which our Redditor theorizes has something to do with the great pyramids of Mereen falling in the books. However, I'm instead going to chalk up to a different Mountain. My heart is still in it for a Cleganebowl between FrankenMountain, or the artist formerly known as Ser Gregor Clegane, and the Hound. Maybe if we've got a Cersei versus Daenerys dynamic in Season 7, the Mountain will have to defend his lady's honor and get hanged by his brother in the style of the guys the Hound just killed at the end of Season 6. Arya Stark would be stoked.

The final part of the prophecy is "when your womb quickens and you bear a living child." Now, Dany has said she wouldn't bear any man's child but Drogo's. Meanwhile, in the books, she hasn't menstruated since she lost her baby and husband in one fell swoop, before she was a Mother of Dragons. However, George R.R Martin makes a poin,t in Khaleesi's final chapter, to mention that her "moon blood" has returned. Could a baby be in the works?

Sure, when Mirri was making this grandiose statement, what she meant was "you're never ever going to have a baby or see Drogo again, you stupid jerk." But what if she was accidentally also making a prophesy? Magic is a strange thing, especially in the Game of Thrones universe. She could have been telling the future without even realizing it.

Then, there's the weird series of Instagrams, two of which were mysteriously deleted, from the account of Jason Momoa. Each of the 'grams rocks the hashtag, #ALOHADROGO. Aloha means goodbye or hello in Hawaiian — but what if it's hello? Two of the conveniently deleted pictures said things like "see u soon" in regards to both Emilia Clarke and the writers of Game of Thrones, David Benioff and Dan Weiss. Fishy, right?

Maybe things won't go down with Drogo exactly the way of this prediction. Maybe Drogo isn't Azor Ahai. But it definitely seems like there's something rotten in the state of Westeros. We'll just have to wait until Season 7 or maybe even Season 8 to find out exactly what that something is. Keep on theorizing, guys, because this downtime is tough.