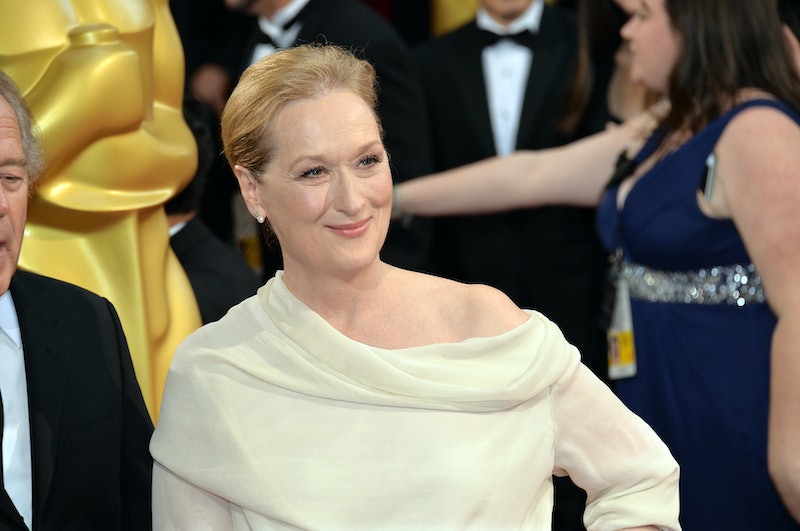 We were already pretty thrilled with the casting for Meryl Streep upcoming feminist film Suffragette, which also stars the lovely and enviably stylish Carey Mulligan, but now, the film is breaking new ground in addition to reminding us of the ground broken by the brave women who fought for our right to vote.

According to The Hollywood Reporter, Suffragette is the first commercial film to be allowed to shoot scenes inside of London's British Parliament chambers. Now, it may not seem all that fantastical: So what? Streep got someone to let her shoot a movie somewhere no one else has. She's also the queen of the world and a flawless superhuman. What else is new?

It's exciting because while much of the film industry is — as we've iterated about a thousand times before without managing to nudge the needle an inch — male-dominated. And Suffragette is not only a story about one of the greatest feminist triumphs in history; it's not only a film pairing two incredibly talented actresses together onscreen; it's not only a film produced, written, and directed by women in an industry where that's practically unheard of; it's also garnered the favor of the British government, who granted this first-time privilege to the filmmakers.

The filming permission is a tiny piece of the women in film puzzle, but it is a piece of it. This show of faith in the female filmmakers comes after the 2013 box office numbers confirmed that audiences want to see more women leading films when Katniss Everdeen and Catching Fire earned the most cash that year. It comes after The Heat, an action comedy starring Sandra Bullock and Melissa McCarthy raked in mega bucks this summer. And it comes after even Will Ferrell realized that he needed to make sure his company, Gary Sanchez Productions, is catering to women. It's clear now (and always, we just have numerical proof to go with it) that films about women and especially films by women are not only profitable, but alluring.

This first-time privilege for a film that quite literally ticks off every box possible to be a pro-feminist and pro-women-in-film production looks like a blip on the radar, is a small message to the rest of the industry: women are here in the film industry, making incredible films, and getting support to do so.

And here's hoping Suffragette is just the first of many films to scream that truth from the rooftops — be those rooftops above Parliament or some other iconic location.