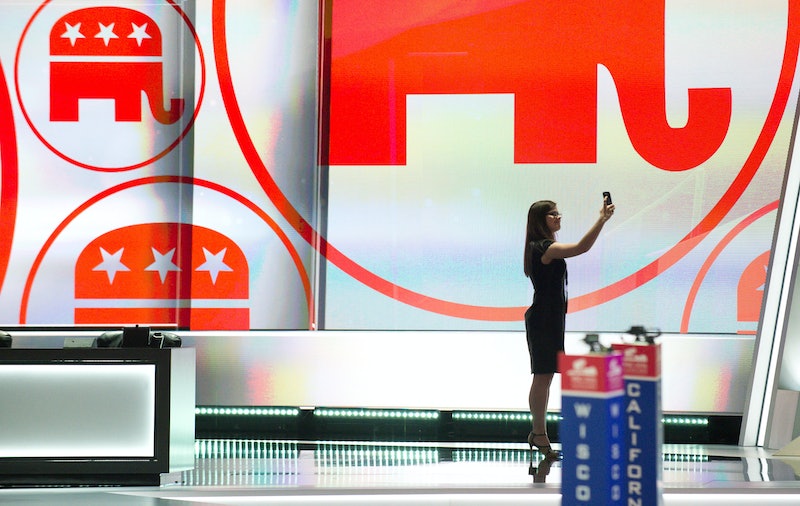 The masses descended on Cleveland, Ohio on Monday for the beginning of the Snapchat filter-friendly Republican National Convention — where, it seems, anything could happen. As recently as last week, speakers were changing, schedules were unpublished, and Republican nominee Donald Trump's VP pick was still in doubt. If nothing else, Trump has proven this election cycle is unlike any other, though this isn't entirely due to the GOP's unorthodox candidate. Technology continues to play an increasingly large role in presidential politics, whether it's to help amass huge quantities of donations from millions of different donors or simply the fact that the RNC hall is also a Pokémon gym.

But while the four-year election cycles don't seem all that far apart — can it really already be eight years ago that Obama/Biden defeated McCain/Palin? — it's eons when it comes to tech, and there's one service that's getting its full-feature debut at a political convention in Cleveland this week: Snapchat.

Though it was launched in 2011 as "Pictaboo," by the time of the 2012 conventions, Snapchat still hadn't become the young person media beast that it is today. The app, now bulked out with video packages from major media outlets and a vast array of functionality and versatility, is a new shining gem of the media/tech world, and it looks like it's ready to play politics. And Bustle is on the ground in Cleveland, checking out RNC-specific Bustle filters Snapchat has served up. You can follow Bustle on Snapchat at bustledotcom.

The first offering is this super adorable elephant, who, in my reading of it, offers the only snark-free filter for the 4-day GOP confab. If you're also a left-leaner like myself, you might share in my frustration that the Republicans get an awesome elephant as their representation (not to say anything against donkeys, but elephants are pretty frickin' great), and seeing this cutie-pie at the podium almost makes me forget all the horrible stuff he stands for.

From there, though, the filters get a little... edgier.

This filter seems fairly neutral, but there's a subtle undertone of mockery here, right? I mean, I'm sure we can expect hundreds of earnest snaps from tipsy (or better!) RNC delegates with this filter in the coming days, but somehow, I can only see it being used ironically.

Same thing here: is there any way to not use this filter ironically? I mean, I want this one real bad, and probably have wanted something like this since I used to pretend I was doing news-package updates on my everyday life à la Clarissa Explains It All. (Which is a perfect opportunity to remind everyone that Ferguson supported Dan Quayle.)

But now we get into the more, ahem, pointed filters.

Protesters at a political convention are as de rigueur as butter sculptures at the Iowa State Fair, but with this year's RNC gearing up to be particularly divisive, Snapchat seems to be underscoring the need for documenting any civil unrest that might occur.

The only question: Will this protest footage be available to use later? This isn't the first time (this week) that the fleeting nature of Snaps has posed a problem.

If you were looking for the mic-drop of savvy cyber political moves, I think the Clinton campaign might have just delivered it: this sponsored filter from Hillary for America is the perfect ammo for anti-Trump campaigners of all stripes (though surely some will grimace at Hillary's name at the bottom).

The real question is: will we see Trump hit back next week? Does he even know what Snapchat is?

Finally, we gotta get something for the home team. Though, while this sort of seems like a "Cleveland Rocks" type filter, it's hard to ignore the underlying acknowledgment that a majority of voters are dissatisfied with their presidential options. As long as voting-age Cleveland Snappers remember that LeBron isn't actually on the ballot, though, we should be a-okay.

More like this
YouTuber Runs Into Margaret Sanger’s Grandson While Filming
By Alexis Morillo
American Girl Doll Memes Are Going Viral On Instagram & Tiktok
By Emma Carey
EJ Marcus Runs The Most Wholesome Corner Of TikTok
By Alexis Morillo
What Is A “Softboy?” The TikTok Term & Aesthetic, Explained
By Courtney Young
Get Even More From Bustle — Sign Up For The Newsletter