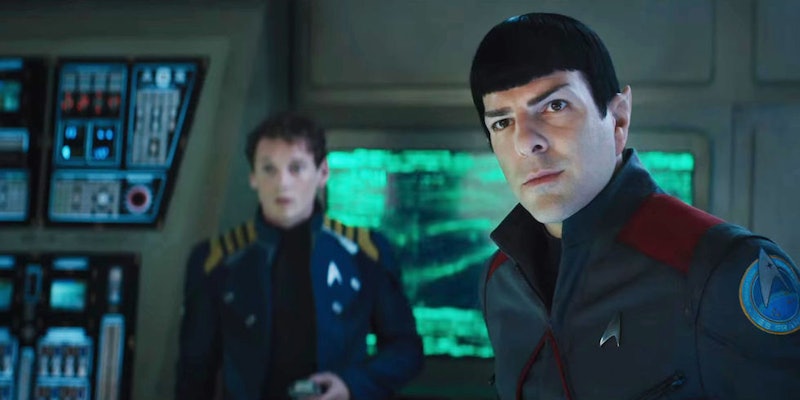 Even though I was that kid in middle school who had a Frodo T-shirt and an obsession with marching band, I didn't get into Star Trek until the J.J. Abrams reboots came out. But once I did, I loved them — these movies are super sexy, from the actors to the cinematography to the killer soundtrack. But if you are like how I once was and have some serious catching up to do in this department before Star Trek Beyond comes out on July 22, the internet (like always) is a great place to begin. While the more recent Star Trek movies are not on Netflix, you can beam up the classic TV show and its spin-offs straight to your computer. Get ready for some '90s sci-fi realness and some very badass women.

Tried and true Trekkies have different opinions on the matter, but the Star Trek franchise is so large that you could essentially begin anywhere and go through the series at your own pace. Where the newer movies are sleek summer popcorn narratives, the TV shows have longer timelines and came out as programming for a niche community; in this sense, they are able to take on heavier material and develop fuller characters across the board. The Star Trek shows on Netflix range in age but wind up addressing the social issues of their times, often bringing feminism to the final frontier.

While Kirk and crew boldly went where no man had gone before, the original show itself forged its own innovative path. For example, the very first interracial kiss on TV was long-attributed to a 1968 Star Trek episode, "Plato's Stepchildren," where Kirk and Uhura lock lips. While contemporary TV historians have disproved this statistic, it was still a bold choice in the '60s. As Nichelle Nichols, the actor who played Uhurua, recalled in an interview with Geeks of Doom:

The whole time, Bill [Shatner] is still being silly and pretending to have to take the kiss shot over and over again. He’d say, “I didn’t feel right about that one. Let’s do it again.” Meanwhile, the NBC guys keep talking to the director about how the station affiliates in the South might react, which just made us all the more tense.

With its jam-band theme song and cheesy sense of space exploration, the opening sequence of this show is so early millennium. It's perfect for any '90s kid who wants to revisit their childhood.

According to The Mary Sue, Voyager has more episodes that pass the Bechdel Test than any other part of the franchise — every episode of Season 5, for instance, totally passes with flying colors. Pretty cool.

The graphics in the opening theme alone make this show worth watching.

5. Star Trek: The Next Generation

Most of my Trekkie friends consider this the ideal place to begin (even though I am totally team Voyager). I mean, Patrick Stewart is here.

If you're really, truly in the mood for a Star Trek movie, this is the only one available on Netflix. Jean-Luc Picard earned some stellar reviews from critics back in 1996, with Variety writing, "If First Contact is indicative of what the next generation of Star Trek movies will be like, the franchise is certain to live long and prosper."

Old school cartoons from the '70s, anyone?

While we're still going to have to wait for the new movies in theaters and on Netflix, there's still a whole universe for you to explore.

More like this
What’s New On Netflix: Ana De Armas’ 'Blonde' & A Nick Kroll Special
By Arya Roshanian
Here’s Everything Coming To & Leaving Netflix In October
By Jake Viswanath
Twitter Is Pouring Out Some Zhampagne As ‘Schitt’s Creek’ Leaves Netflix
By Brad Witter
These 25 International Horror Movies On Netflix Prove Fear Is A Universal Language
By Bustle Editors
Get Even More From Bustle — Sign Up For The Newsletter