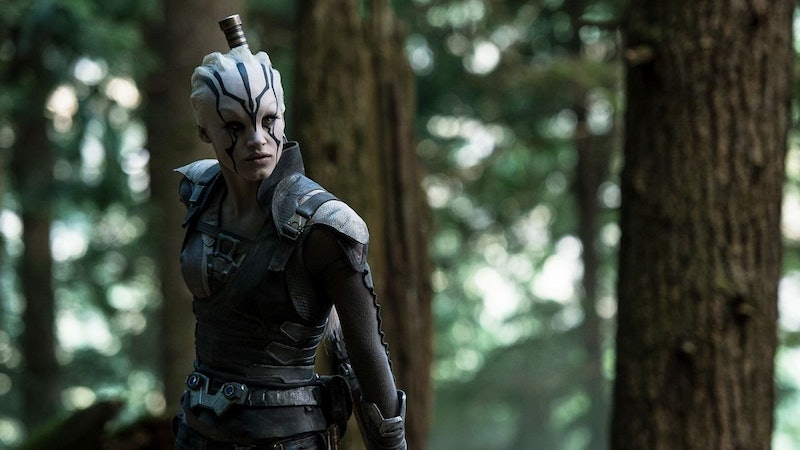 Among all the familiar faces in the trailers for Star Trek Beyond, a new and striking image stands out. She's dressed in all black, her face is mostly white with a black, geometric design criss-crossing on her forehead. (War paint meets modern art.) This is Jaylah, a new Star Trek character played by Algerian dancer and actor Sofia Boutella. Already successful in other art forms, Boutella broke out onscreen in 2014 Kingsman: The Secret Service as an assassin with knives where her feet should be. Her Star Trek Beyond persona seems to be similarly skilled but infinitely more friendly. Jaylah is being tipped as the scene-stealer of the third installment in this Star Trek reboot series. And that tracks, because co-screenwriter Simon Pegg admitted at a press event for the movie (via Vogue) that Jaylah was inspired by Jennifer Lawrence, a scene-stealer in her own right.

What about Oscar-winning actress and pizza fanatic Jennifer Lawrence translated to a bo staff-wielding alien? Promotional material shows that the Enterprise is attacked early in the film and the crew forced to abandon ship. They're stranded on a planet called Altamid. According to Empire (via the iDigitalTimes), Jaylah is also on Altamid against her will. She's been there for years, living off the land and avoiding the minions of the movie's big bad, Krall. That's where the Lawrence connection comes in, particularly her performance as a tough teenager searching the Ozarks for her drug-dealing dad in the 2010 drama Winter's Bone. As reported by Vogue, Pegg told the assembled press:

Doug [Jung, cowriter] and I and [director] Justin Lin in the writing room wanted to create this very independent female, very resourceful character on the [Altamid's] surface. We didn't have a name for her, so we used to call her "Jennifer Lawrence in Winter's Bone"...It's a long name! So we started calling her "J. Law," and then she became Jaylah.

Like the real Lawrence to a David O. Russell movie, this Jaylah could be a valuable resource to the officers of the Enterprise. Boutella describes Jaylah's heritage in this featurette as being "a very strong race of aliens — physically, extremely strong." And her brains are level with her brawn; apparently Scotty will finally find his mechanical match. Producer J.J. Abrams piles on the compliments too, promising that Jaylah is a "spirited, sweet, funny, tough-as-hell character" to add to the mix.

In the clip below, Jaylah meets Starfleet technician Scotty (Pegg) and the strangers strike up a tentative deal. Jaylah asks Scotty about the insignia on his uniform; makes it clear that she is by no means a part of Krall's army, and then leads the officer somewhere, presumably safe. Scenes in the final full-length trailer show Jaylah slouched in the Captain's chair to the amusement of everyone but Kirk, so it's fair to assume there's a friendly partnership between her and the crew.

Boutella seems to share her character's determination. The actor told the New York Daily News that she had to spend five hours each day in make-up to complete her Jaylah transformation. She credits a former boss and one of her mentors for instilling that work ethic. “Madonna taught me a lot of discipline and hard work,” Boutella said about her stint dancing for the artist on tour.

I have a feeling there's even more to Jaylah than her distinctive appearance, technical know-how, and survivor's instincts. Her backstory too will likely be revealed in Star Trek Beyond.

More like this
Revisit 1992’s 'A League Of Their Own Cast' Photos After The New TV Series
By Grace Wehniainen
At 28, Lesley Manville Was Acting, Picketing, & Singing Kate Bush Songs
By Olivia-Anne Cleary
Reese Witherspoon Gave Fans Hope For 'Legally Blonde 3' After This Surprising Movie Inspired Her
By Jake Viswanath
Jennifer Aniston Just Gave Courteney Cox The Biggest Endorsement
By Darshita Goyal
Get Even More From Bustle — Sign Up For The Newsletter