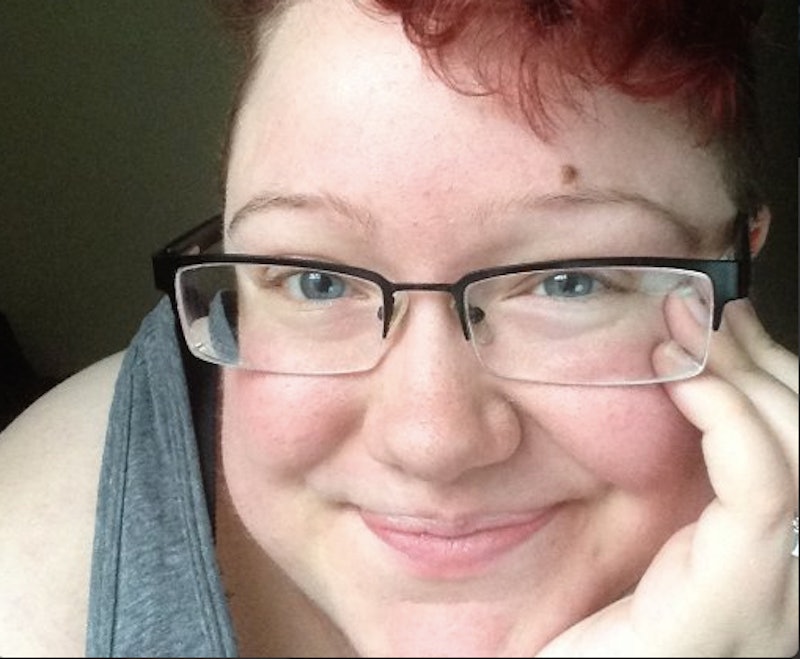 Like an estimated five million other assigned-female-at-birth folks, I have polycystic ovarian syndrome, which means I rock increased facial and body hair at large. Facial hair, in particular, that a lot of folks seem bothered by. But why exactly is that? Why does my facial hair bother some folks so much?

For the AFABs out there who want to find treatment to soften their symptoms, well, it can be hard — especially if you’re fat. As a fat human, I went through three different doctors when attempting to get a legitimate diagnosis and treatment, and faced: A male physician who wrote down “PCOS” on a piece of paper and told me to Google it and lose weight, a doctor who said birth control was my only option, and another who made me describe to her in detail what I “thought PCOS was” before she would even talk to me about it.

Because I’m transmasculine, some of PCOS’s most common symptoms are a bonus for me rather than a problem, as they edge me toward a more masculine presentation. I have naturally higher levels of testosterone in my system and I get fewer periods, both of which mean less PMS-related body dysphoria for me. My voice is also deeper than it once was.

But I also grow facial hair. A lot of it. It's a fact I'm proud of now, but one that can be difficult to come to terms with when you're AFAB. Saying, “I definitely want you here, beard,” in a world where totally natural body hair on women is so often condemned as a sign of bad hygiene can feel like a little act of rebellion. To do it, you've got to have the confidence to rebel: To stare back when a makeup saleswoman giggles and says, "Are you looking for the men's section?" Or when a beautician doing your nails jokes, "Are you sure you don't want a facial wax appointment?"

When my facial hair started growing, I Googled it much like any other red-blooded hypochondriac out there would've, and I stumbled across a 2010 article from The Guardian that encouraged women to embrace their facial hair. If you scroll down to the comments section, the first remark you'll see is this.

My PCOS hair growth happened pretty gradually, and started with my stomach. One week it was a light sprinkling of peachy-blonde belly hair; the next it got wirier and darker. Eventually, I had a full-on treasure trail. Then I started growing sideburns, followed by the occasional furry patch on my right cheek.

And then, to my complete horror, I grew a neckbeard. We're talking an internet meme-worthy neckbeard. Nice jaw stubble was apparently not my destiny.

Today, having facial hair is a key expression of my gender identity. But to people who don’t know that I’m nonbinary, I look like a woman who “needs to get some serious laser work done,” or who should “just suck it up and wax,” because of the tired ideology, "Ewwwww hair on women."

If you Google “women with facial hair,” the majority of the top results either use the word “unwanted” or “embarrassing.” My facial hair, however, is neither unwanted nor embarrassing. Women can feel any way they want to about their body hair, of course, but when their feelings are solely informed by what they’re told body hair should be (aka nonexistent), their bodies pushing forward and doing something completely natural like growing some damn hair can turn into a daily compulsion of self-loathing.

I was there. I have scars on the underside of my chin and the sides of my throat. All from dragging pumice sponges over my skin until hairs stood on their end so I could hunt them down with tweezers.

So what happens when you Google "men with facial hair?" You might come across a headline or two proclaiming, "Inside every clean-shaven man, there is a beard screaming to be let out." Being AFAB and having facial hair is not unlike like being AFAB and having armpit hair, or leg hair, or an interest in science, or a desire to state your opinion. All of those things are fine, for men. But not for us.

The thing is, I don’t usually notice that my body hair is there until someone else points it out. I didn’t shave my legs for most of my Catholic high school career, making me one of the few fuzzy-legged kids running around in a skirt.

To be honest, I don’t remember exactly when I first realized people staring at my facial hair, but it was probably at the hair salon. I used to go to this swanky, extremely heteronormative place where upper-class white people gathered to talk about how exhausting their kids were or about their husbands’ latest “charming antics.” I was a well-known face there because I was one of the only lady-passing clients with a short cut.

It's funny how well-meaning a comment can be while still cutting you up inside. All it took was a stylist running her fingertip down my sideburns and saying, "I can take these off for you? Make you look more feminine?" to set off self-consciousness and dysphoria.

After I realized I had it, I hated my facial hair. I plucked it obsessively almost every night, getting everything off my throat, going after the stiffer hairs on my chin, and carefully shaving the baby mustache threatening to take over my upper lip. I soon had rough red patches of skin, tons of breakouts, ingrown hairs, and scars. But I kept at it. I couldn’t let people see. What would they think of me?

As of late, however, "women with beards" is a subject that’s become more commonly discussed — and subsequently more commonly ridiculed. Earlier in 2016, Adele announced that she grew a beard while she was pregnant (you and me, Adele, we’re screwed-up hormone twins).

Simultaneously, the amazingly gorgeous model and activist Harnaam Kaur has risen to the limelight of the Web. Kaur, who in March of this year became the first bearded woman to walk a runway show, also has PCOS, which makes me wonder why I have to be stuck with neckbeard while she looks killer 24/7.

Kaur and I both utilized rigorous beauty routines intended to keep anyone else from ever knowing we had facial hair. In a 2015 interview with People, she said that she tried removing hers through every means possible, but noticed the same damage I did. She told People:

I started to wax my facial hair, tweeze it off, thread it off [...] I shaved every day and I even used hair removing creams. My skin became very rough, I was left with scabs, and parts of my skin were torn off when I was waxing.

Speaking openly about having facial hair is still hard for me. It’s almost impossible to say, “I am a woman with a beard” (or, in my case, a nonbinary person with a beard) without someone cracking a sideshow-inspired joke. Even supportive articles sometimes leave me feeling like the actual message is, “Gather closer, all ye who come, and for $5 you too can witness this freak of nature.”

I get it: It's hard not to feel like that sideshow attraction when "rules" of femininity and of what it means to be AFAB tell you that your body hair does not match a facet of your identity.

Luckily, I also have a 3-year-old's stubbornness. I maintain the opinion that if random strangers think I shouldn't do something because "they know what's best for me," I should go ahead and do it. I slowly started looking into the price of laser hair removal, then stopped and forced myself to think about what I was doing. I considered whether I was I plucking, tweezing, and waxing because I wanted to, or because I knew other people wanted me to.

When you're raised as a woman, most of your existence is often framed by what other people want you to do. Teachers want you to make sure your school skirt is long enough that you don't distract male classmates or male teachers. Everyone wants you to smile at all times. Health instructors want you to learn about periods in fifth grade, and then never mention them again because the subject makes boys uncomfortable.

If you're AFAB and you have facial hair, it can take a lot to strip away the internalized sexism that tells you you're unsightly or that you need to "fix" yourself. But I invite you to try this: Ignore the terrible articles claiming that hair is embarrassing and give your body a chance to show you what it can do. Maybe, like me, you'll end up kind of impressed.

I spent years assaulting my own skin, and there are many who think that is something I should continue to do because they "don’t feel like looking at my neckbeard," or my baby mustache, or my carefully-cultivated sideburns.

There are people who think looking at me is hard, and that I should cull my body to make it easier for them.

A word of advice to those people? Don’t look at me.

More like this
I Have Eyebrow Alopecia – & Microblading Gave Me My Confidence Back
By Jessica Morgan
12 July 4th Beauty Sales To Jump On ASAP
By Jordan Murray
The $6 Drugstore Beauty Product Taraji P. Henson Uses Every Single Day
By Danielle Sinay
35 Summer 2022 Beauty Products Bustle Editors Swear By
By Bustle Editors
Get Even More From Bustle — Sign Up For The Newsletter