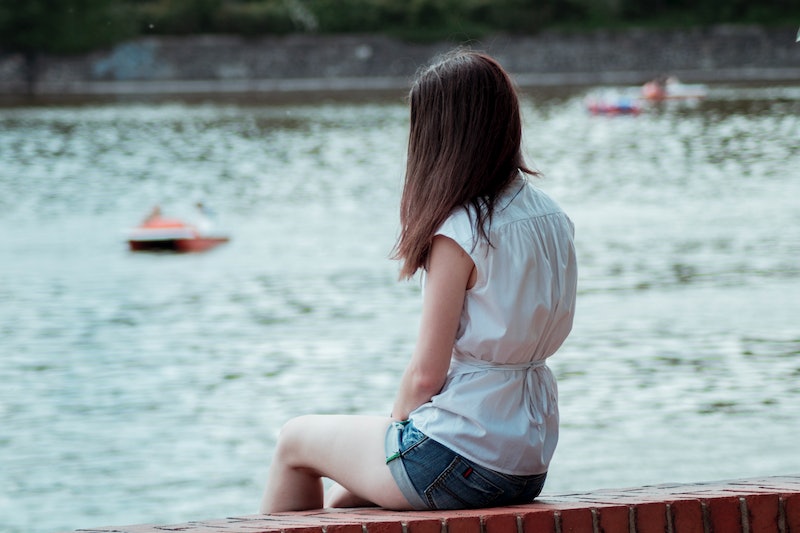 Herpes is treated as a punchline in countless American comedies: the worst, most embarrassing thing that can happen to somebody when they have sex — a scarlet letter forever branding you for some horrible decision that you made, preventing you from ever finding love or engaging in sex ever again. This stigmatization of herpes creates internalized shame in anybody who has the virus. But why can't people start recognizing herpes for what it is — an extremely common virus that says nothing about the person who has it? There are a lot of reasons why someone should never feel ashamed about having herpes.

Dr. Sheila Loanzon, OB/GYN and author of the newly published book, Yes, I Have Herpes, tells the story of her herpes diagnosis at 20 years old after having performed oral sex, before she had ever even had vaginal intercourse. The book details her diagnosis, shame, eventual acceptance, and new confidence in herself and her intimate relationships. Her mission is to teach readers of Yes, I Have Herpes that they are deserving of love and self-respect from both themselves and their partners, regardless of their STI-status.

Dr. Loanzon tells Bustle that it was after working with a life coach, Julien Adler, in 2014 that she began to love all of herself for the first time. Dr. Loanzon had been repeatedly having the same issues in relationships, and since she was the common thread, she decided it had to have something to do with her. Dr. Loanzon nervously admitted to Adler that she had the herpes virus, and his coaching helped her move on from her diagnosis. "[Adler] said, 'Oh my god, that's huge! Here you are entering into relationships and thinking that you are tainted and that something is wrong with you. How could you possibly be loved if you feel like there is this horrible, damaged part of yourself?'"

Dr. Loanzon learned that she was struggling with self-love, self-respect, and self-confidence — stemming from the shame she had internalized after her herpes diagnosis. "It took a lot of work and the realization that I was created perfectly exactly as I am, and if somebody doesn't love me for that aspect, there are plenty of [people] out there who are very interested in this beautiful, shiny self that I am," she tells Bustle. Once Dr. Loanzon realized this about herself, she changed her perspective in dating and self acceptance, and says, " ...the world opened up."

Here's why you shouldn't feel ashamed if you have herpes.

1. It Is Extremely Common

It doesn't make sense that STIs are so stigmatized when you look at the statistics. Why are people ashamed of something that the vast amount of people will deal with at some point in their lives? As. Dr. Loanzon explains, the secrecy with which we discuss herpes clouds our perception of how common the virus truly is. "It really affects more people than even diabetes," Dr. Loanzon says. "One in six people have herpes, and one in 11 people have diabetes. That means there are more of us who have herpes that are just floating around, don't know about it, or are hiding it."

And because herpes is misunderstood, there certainly are people who go through life without even realizing they have it. Dr. Loanzon told me that one of her close friends, also a physician, asked her, "Wait, I have oral outbreaks. Are you telling me that's herpes?" Dr. Loanzon, shocked, said, "You're a doctor! Of course that's herpes!" In that moment, Dr. Loanzon's friend realized that her husband must also have the virus, and admitted that she had no idea that she had been dealing with herpes for years. It's a normal, non-life threatening part of a lot of people's lives.

2. You Can Get Herpes In Multiple Ways

Dr. Loanzon contracted the virus when she had not yet even had vaginal intercourse — only oral sex with her college boyfriend. Herpes is not a virus that only affects one type of person, nor is it only spread in one specific way. Contracting the virus is not a sign that you did something bad or stupid. She broke down how the virus spreads differently, and why certain strains are more stigmatized: "Herpes itself is considered sexually transmitted; however there are two types: Type 1, and Type 2. In the past ... herpes was herpes regardless of where you got it. And down the line, we started distinguishing between the two: 1 meant oral herpes, and 2 meant genital. In our society, all the sudden 1 was OK and 2 was bad to get."

Dr. Loanzon contracted Type 1, and some people contract Type 1 without performing any sexual behavior at all. I have at least two friends who got oral herpes before they were 10 years old because they shared a drinking glass with an older relative who wasn't aware that they had the virus. The virus is not only passed by a person with an outbreak and evident ulcers. "People can just have viral shedding and not even know about it, and that's how it is getting passed along," says Dr. Loanzon.

3. It Does Not Mark The End Of Your Sex Or Love Life

For Dr. Loanzon and most people who have the virus, one of the most difficult parts of navigating the diagnosis is learning how to divulge your status to a new partner or love interest. Herpes is treated by our society and by our popular culture as one of the worst things that can happen to a sexually active person; if you have the virus, it is a sign that you are "tarnished" and will struggle to find love. It was through conversations with her life coach that Dr. Loanzon learned how to express herself, and through real life practice, she too learned that it really didn't affect anything.

Dr. Loanzon's book describes the many ways she communicated her virus with partners; she told me she'd simply say, "'Hey, this is what I have. I don't know if you're into it or not. I think the virus turns some people off. If it's not something you are into, no big deal — let's not waste any time; I will go ahead and move on.' And I actually found that once I had that approach, most of the gentlemen that I was dating didn't even care... They were like, 'No big deal, don't a million people have it? It doesn't matter to me. Do you have an outbreak right now? No, great, let's go for it.'"

Of course, that doesn't mean that every conversation you have will be easy, nor does that mean you will feel confident every time you have the conversation. Dr. Loanzon says that her book details some of the mistakes she has made along the way as she learned how to talk about the virus. But the point is that your sex and love life are far from over — especially because there are safe ways to continue having sex.

4. There Are Ways To Keep Your Partner Healthy

"The most important thing is to talk to your partner," says Dr. Loanzon. "Speaking about sexual history is really important. A lot of us get very fearful when speaking about sex. As an OBGYN and as a person who is herpes-positive, I think it is really important to talk to your partner before [sex] and say, 'I wanna make sure you are OK with this because I don't want to jeopardize your health.'"

The next steps that you should take to keep you and your partner healthy include the use of condoms and medication. Condoms can really help with prevention — but Dr. Loanzon explains that they are only 96 percent effective, not 100 percent. She says, "The herpetic virus can infect other areas, so even if you are using condoms, there is still some skin exposure. The fluid from the ulcer can infect other areas." Medication for daily suppression, Dr. Loanzon explains, can make a huge difference. "If you are herpes-positive, using daily suppression can help decrease your risk of transmission to your partner. And that is daily dosing of an antiviral mediation, which can help decrease viral shedding significantly so that your partner wont end up being exposed."

5. It Says Nothing About Your Sexual History

"The misconception is that people with herpes are promiscuous, dirty people," says Dr. Loanzon, but as she can attest, "I had been a virgin of sexual intercourse when I was 20 years old. I had a boyfriend, and we had just started to kind of figure out physical intimacy in general. And I actually contracted herpes from oral sex." Getting herpes does not make you a "slut," nor does it make you stupid. It makes you a person with one of the most common viruses in the population. That's it.

6. There Are Ways To Take Care Of Yourself

If you have herpes, there are lots of way to lessen the symptoms of the virus. "One of those is episodic treatment," says Dr. Loanzon. "That treats the outbreak as needed, decreases the length of an outbreak, and speeds up recovery by shortening the symptoms that people can have." People can also use daily suppression medication, as mentioned above, to protect themselves and their sexual partners by reducing viral shedding. "Generally in medicine, we recommend people who have more than six outbreaks a year be put on daily suppression. However if you're dating, afraid of giving it to your partner, or just want the peace of mind – this would be the medication you would use."

7. It Is Only A Taboo Because No One Will Talk About It

Things stop being taboo when we stop staying silent about them. We need to normalize herpes, and Dr. Loanzon's book aims to do that by sharing her experience and journey. She has already heard from many readers who see themselves in her story: "We're all having the same experience, yet nobody is talking about it. One of my girlfriends who is a plastic surgeon just told me, 'Several years ago, breast cancer was a taboo thing, and now everybody knows someone who has breast cancer.' I'd really like to move [herpes] into that commonplace topic."

8. You Are Worthy Of Love

While herpes is her platform, Dr. Loanzon's book is about a lot more than that. "It is about self-worth and self-love," she says, and how she learned to accept herself regardless of how others interpreted her health status. "There is power in choices. We don't have to be victims to what happens to us. [If] you ended up [getting] herpes, we can choose to grow from it or we can crumble underneath the diagnosis," she says. "Herpes can be a curse that can just upend a person, but it can slingshot you into so much more emotional growth than [you] can even expect... We all don't do it 100 percent correctly the first time, but by shifting perspective and knowing that we are not alone, it gives that comfort level and that confidence to really move forward."

Since there are many ways to protect oneself and many people actually aren't afraid of herpes, it is very likely that you too will be able to find accepting partners on your own. But it good to know that there are also plenty of dating apps and sites specifically for people who have an STD — that's how common it is to have herpes. These social platforms mitigate some of the discomfort in disclosing your status, because everyone is dealing with the same thing.

And don't fear opening up, because Dr. Loanzon attests it won't be as scary as you think. You will find the love that you deserve: "People are much more open and supportive when we actually allow them to be."