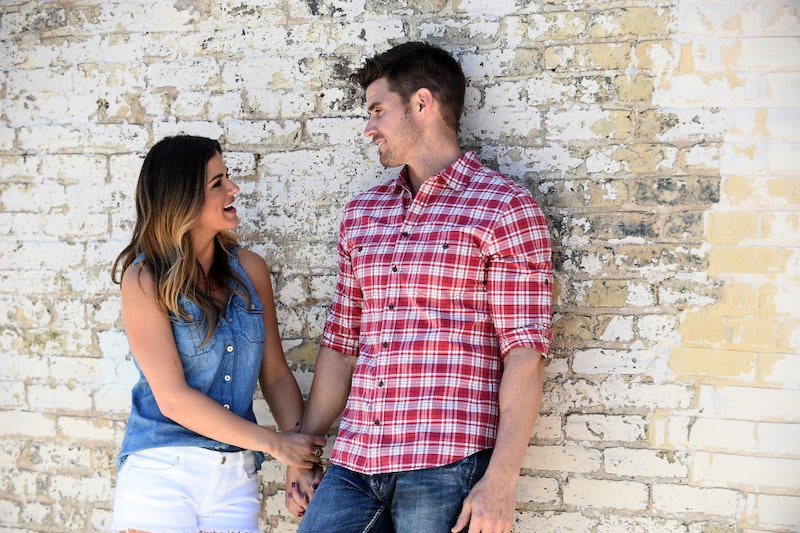 Guys, there are only three remaining men on The Bachelorette. Can you believe that? Three! I feel like the season just started, but here we are, at the end of hometown dates, and things are getting pretty emotional now that JoJo has to say goodbye to guys she's grown really attached to... starting with Luke. But after the big cliffhanger, JoJo's decision seemed pretty unclear. So will JoJo send Luke home on The Bachelorette ? It seems like there's definitely a chance it could happen.

After the hometown dates wrapped up, JoJo met her suitors in an airplane hanger to make a the difficult decision about who to send packing. But before JoJo could give the roses out, Luke pulled her aside to talk. He told her that after their hometown date, he wanted to make sure that she knows that he's in love with her, even though he didn't get the chance to tell her... seconds after JoJo revealed in her in the moment interview that she's pretty sure Luke is the one she's kicking to the curb. OK, does this guy have a sixth sense and knew he was about to be sent home or what?! That timing was too good.

And unfortunately for JoJo, Luke's confession of love was just enough to throw her off her game. Now knowing how he feels about her, JoJo was totally confused, complete with tears. But honestly, can you blame her? This is stressful stuff. It's not easy being in her position, even if she did get to look gorgeous in that shiny blue dress.

And since The Bachelorette producers love making us wait, that's where the episode ended, which means the rest of us are left to wonder who JoJo will actually send home. Will it be Luke? It seems like it will be, since she was super sure about everybody else until he decided to speak up, but we'll have to wait until next Monday to find out for sure.

The good news? There are two episodes of the show next week, so I'm willing to forgive and forget this little cliffhanger. If Luke does go home, I'm going to be super bummed for him. He's so sweet and genuine... and he looks great in plaid.

More like this
'Bachelorette' Vet Clare Crawley Unveiled 2 Special Wedding Day Accessories
By Stephanie Topacio Long
Kaitlyn Bristowe Said Chris Harrison Ignored Her After Her 'Bachelorette' Hosting Gig
By Grace Wehniainen
Airris From 'MAFS' Says He Doesn’t Regret Going To Decision Day With Jasmine
By Brad Witter
Shaq Might've Spoiled His Relationship Status With Kirsten After 'MAFS'
By Brad Witter
Get Even More From Bustle — Sign Up For The Newsletter
From hair trends to relationship advice, our daily newsletter has everything you need to sound like a person who’s on TikTok, even if you aren’t.