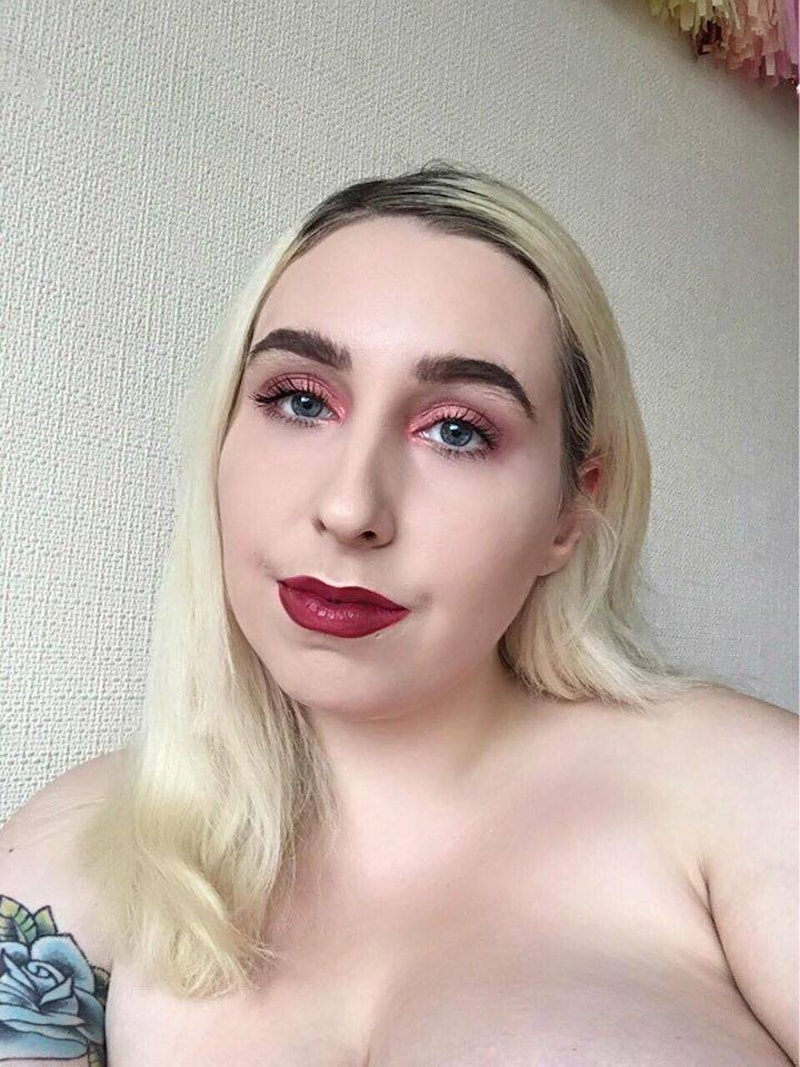 My humor is littered with "that's what she said" jokes, my laugh is like a dirty cackle, and no matter what the weather is, I'm usually dressed in as little as possible. Being over-sexualized as a plus size woman is not a concern for me, but a pleasure. The male gaze is something I want to play with, win over, and then destroy through my aesthetic.

My attack on patriarchal standards of beauty comes through exaggerating them. If you want me to look a certain way, then I will, but I'll make it so over the top — so cartoonish — that you will see the ridiculousness of these standards in the first place. But although this is my personal way of fighting for feminism with femininity, I cannot help but question whether I am contributing to what feels like an overall sexist stereotype of the plus size woman.

That said, arguing against embracing the sexual imagery of being plus size — or even simply against plus size women choosing to dress sexily — feels unfair to those of us who find empowerment in it. Although diluted, this argument seems similar to that against femininity in feminism, whereby traditional femininity and all things girly are derided for their arguably patriarchal roots.

By trying to remove femininity or sexual status from a woman, plus size or otherwise, the implication is arguably that femininity and being sexual are negatives, and should be replaced by masculine alternatives. The ideology that being masculine does not only equate to having the upper hand, but that it is also the norm, thus remains perpetuated. It can feel almost like the alleged and expected setting to being a human being.

And that, in my eyes, isn't just wrong, but dangerous.

Regardless of whether standard feminine traits are perceived as feminist or not, my femininity is anything but standard. My personal brand of femininity is aggressive: It's over the top and in your face and not going down without a fight. My nails aren't just manicured, but purposefully long and pointed. My bleach blonde hair frizzes, my makeup doesn't accentuate my features, but exaggerates them. And in the same tone, my wardrobe clings to my body. My breasts burst forwards alongside my stomach and ass. My fat is free to be stared at, to be longed for, and simply, to exist.

With the rise of plus size representation in society and the media, in particular with plus size models, it's only natural that one such person would address some of these issues. Curve model Ashley Graham spoke out against the over-sexualization of plus size women towards the end of 2015 in an interview with Details.

She told the publication, "Curvy bodies have always been the sexier bodies in fashion. Any model who is strictly a lingerie model, she has fuller breasts and fuller hips. Girls who are much thinner, who might be a size zero with no T&A, are not the Victoria’s Secret model. And it just goes to show that a curvier body is considered sexier. So if you get an even curvier body, like mine, we’re automatically sexualized. If I was cast in a role in a movie, I know without a shadow of a doubt that I would be the sexy girl."

Her comments, although based in the worlds of modeling and film, are precisely the critique that I am trying to dissect in my day-to-day.

Since this interview, Graham has covered two of the arguably most sexualized magazine covers in print: The Sports Illustrated Swimsuit Edition and Maxim. It's a move that, in my opinion, contradicts her previous statement to Details. Still, these were shoots that Graham agreed to, these were campaigns she chose to be part of, and in this sense, she had control over her sexualized imagery.

It's a control that I feel is all too important when playing with the perception of plus size bodies. While the inherent sexualization of being plus size may be a negative, that same sexuality can be made powerful when utilized by the plus size people themselves.

Embracing that my bigger, plus size form is sexy not only thrills me, allowing me to play with patriarchal notions of beauty, but liberates a part of myself that once was. By wearing next to nothing, by dressing up for any occasion, by laughing loudly, and taking up space in this world, I refuse to return to a time when I saw myself and my body as worthless.

At the end of the day, the issue lies within a society that ranks women based on their sexual worth, not the individual women themselves. No matter how they dress.

More like this
Help! I'm Not Getting Any Attention On Dating Apps. What Can I Do?
By Sophia Benoit
The 19 Best Tweets & Memes About Bisexual Awareness Week
By Lexi Inks
Women Around The World Are Cutting Their Hair In Solidarity With Mahsa Amini
By Darshita Goyal
The 12 Best Strapless Bras That Won’t Slip & Fall Down
By Audrey Williams and BDG Commerce
Get Even More From Bustle — Sign Up For The Newsletter