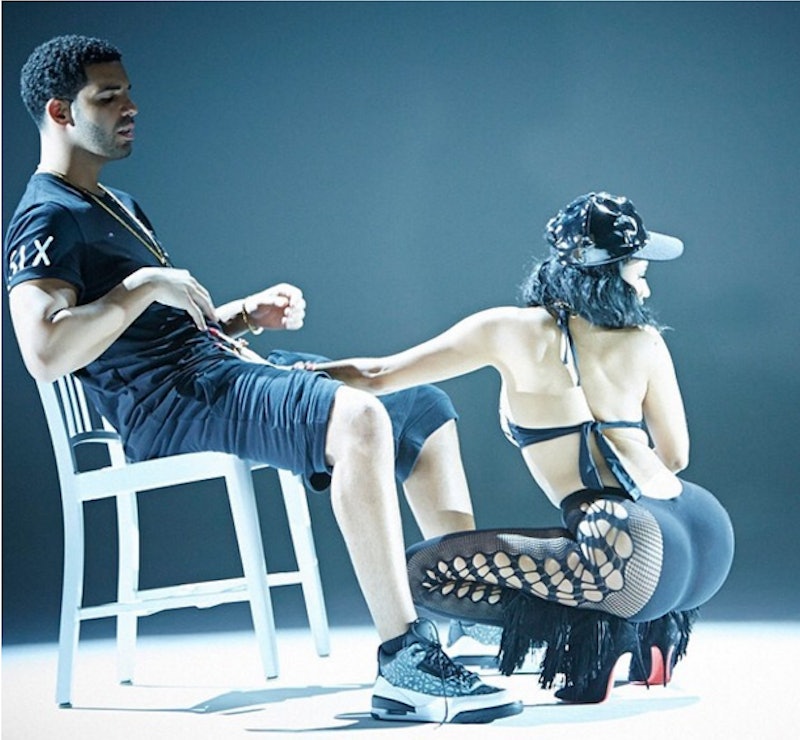 At what point, however, is the line for being big enough to be a big beautiful woman drawn? Is there a size limit for being "officially" fat? And why are women on the smaller end of the plus spectrum unable to represent the plus size community?

I get it: It's understandable to be upset that these women still don't represent most fat bodies. I would argue, however, that a lot of women do feel represented by Drake's BBWs and that to dismiss what is definitely a step in the right direction towards visibility would be counterproductive to the cause. Regardless of how much further we have to go, I want to celebrate the progress that Drake has arguably helped us make.

Of course, another qualm that can be taken up with Drake's seemingly newfound love of fat women is whether his sudden preference of thick bodies is genuine or fake. IMO, Drake has made a career out of playing the "nice guy" — the emotional cutie who connects and cares about women in a rare role for a male artist to pull off. Although controversy has flown around regarding the authenticity of this character through his friendship with alleged human trafficker Baka and his diss track that utilizes some pretty sexist shade against Meek Mill, Drizzy still holds a soft spot in the hearts of many people everywhere. His reputation as a champion of women, regardless of some slip-ups along the way, makes me believe in his body positivity.

Regardless of your stance on Drake's authenticity, the fact remains that this popular rapper is promoting body positivity and diversity in both his lyrics and his music videos. Perhaps the issue some people are taking up with his actions isn't actually rooted in the women being represented (or not being represented) themselves, but with the the man who's choosing to represent them. After all, some of Drake's lyrics do seem to have sexual connotations — "That's right I like my girls BBW, the type that want to suck you dry and then eat some lunch with you" — and it's not as though women need the validation of a man in order to be body positive individuals. However, the fact that he's bringing visibility to a term, to the many women who identify with the term, and to bodies not often seen in the mainstream shouldn't be discounted just because he's a dude.

To me, Drake's phrasing seems more like an attempt to remove the stigma surrounding dating fat women. Based on conversations with fat friends and a lot of time spent on the Internet, I know that a struggle a lot of BBWs face is feeling sexualized and adored in the bedroom by men, but then having said men refuse to be seen in public with them. Instead, Drake addresses this problem with lines like "so thick that everybody else in the room is so uncomfortable," which is pretty comedic but also poignant. Drake just doesn't care. In fact, he's so proud of the thick woman he adores that he's celebrating her beauty in a rap verse.

There's a marked difference in being sexualized and being presented as a sexual being. I believe Drake's doing the latter, and that can only be a good thing. Although thick women are more than able to defend and represent their own sexualities — hello "Anaconda" — this addition to our representation shouldn't be perceived as a negative issue.

Excluding men from the body positivity conversation is damaging. Even if men don't have it nearly as bad as women when it comes to sizeism, body shaming is still an issue that humans of all genders experience. There are plenty of body positive men out there who celebrate self love and fat acceptance, and it's a contribution that shouldn't be overlooked based on gender.

Perhaps Drake's recent obsession with bulking up might not put him into the category of fat men trying to find body positive peace with themselves. Instead, however, it puts him in a place of celebration of fat women purely because he can, wants to, and should. Ultimately, he's building body positivity in his own space in the media. So sure: The BBWs in "Hotline Bling" could be fatter, differently shaped, more diverse, and more representative of the majority of fat women. But just consider that most wouldn't have bothered to use thicker women at all. Luckily, someone's doing something about it.