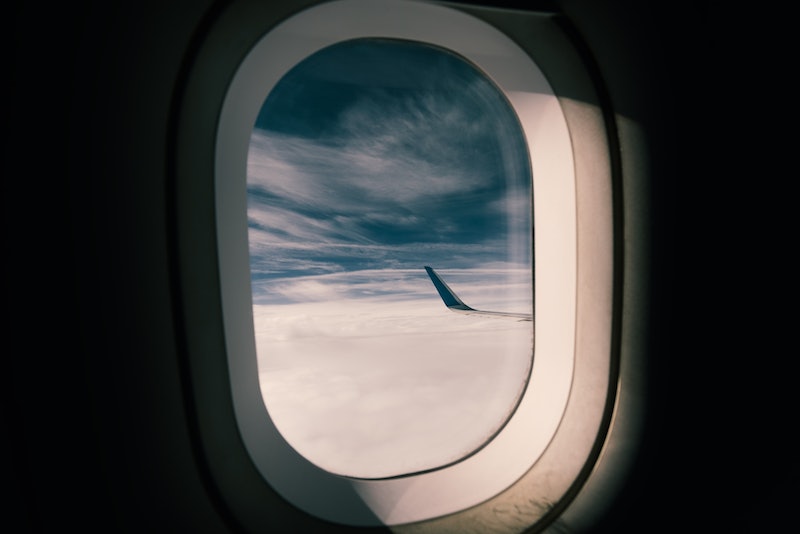 It can reduce professional flyers to prolific yawners and turn even the most seasoned of travellers into zombies — and when it hits you, boy, does it really hit you. I'm talking about jet lag, of course: That disorientating feeling of extreme fatigue that hits you when travelling between time zones, somehow managing to knock you out and keep you up all at once. But if you've ever suspected that jet lag is worse traveling in certain directions, congratulations — you're absolutely right, and there's science to back it up. New research suggests that jet lag hits us hardest when we're flying west to east (as in, going from New York City to London, rather than the other way around), and it's all down to the way in which our brains regulate light.

Described in the New York Times, a study published in the journal Chaos details the creation of a mathematical model which goes some way to explain why the eastbound route can make us feel so much worse than a trip taken the other way round — and hopefully it can also educate us on how to get over this soul-crushing flying fatigue faster. Apparently, we each have our own internal clock deep within the hypothalamus region of our brain. Every 24 hours or so, "20,000 pacemaker cells within that area, known as the suprachiasmatic nucleus, synchronize, signaling to the rest of the body whether it’s night or day," reports the New York Times. These cells are in tune with the light around us and the routine associated with certain levels of brightness — e.g., most of us sleep when it's dark, and move around when it's light.

But travelling across several time-zones can throw these little pacemaker cells into disarray: Our brain gets super groggy because our internal clock is searching for our normal time schedule through those familiar light cues. When it can't be located, we feel jet lagged.

And here's where the plot thickens: The mathematical model showed that a trip less than 12 hours long traveling in an eastward direction is going to make us feel worse than a trip of the same length going west because of the way our body clock is set. Dr. Michelle Girvan, a physicist at the University of Maryland who worked on the model told the New York Times that most of the time, our bodies are a little slow; in the absence of consistent light cues, the pacemaker cells in your body try and extend our day, which most of us can do pretty well. "The body’s internal clock has a natural period of slightly longer than 24 hours, which means that it has an easier time traveling west and lengthening the day than traveling east and shortening the day,” Dr. Girvan said.

This means that if we were to travel from New York to Europe, we could probably handle gaining a few hours because most of us are predisposed to delaying sleep for a bit, anyway (Think late-night partying and all-nighters at college). But shortening our day? That is precisely what messes us up.Based on our body's response to these light cues, scientists hope that the model also offers some simple ways to beat jet lag with minimal intervention; apparently it's all down to our ability to match our internal clock to our destination’s clock as soon as possible. So if you've got a trip approaching, try these three simple ways to curb your jet lag before it eats into your trip.

In 2014, scientists launched an free app based on a similar model to the one explained above called Entrain that works out your schedule of light exposure based on your travel plans. You start by typing in your location and destination, as well as what kind of light you'll be around en route; then this app provides you with a light schedule to help you rest your body clock quickly and efficiently. Another app called Stop Jet Lag also works in a similar way.

2. Adjust To The Local Meal Schedule

In addition to light exposure, meal times also help to provide significant cues to our body. Eating breakfast at breakfast — even though it might be 9 p.m. in your head — is therefore one way to re-train those pacemaker cells.

3. Get Ahead Of Your Schedule

If you're able to switch to the time zone you're traveling to before you board the plane, you may beat jet lag completely, according to Health.com. For example, if you're heading east, you could try going to bed an hour earlier each night a few days before your flight. If you're traveling west from the east, try staying up later than you normally would. This technique is generally only useful if you will be at your destination for more than two days, though; additionally, if you're going to change your sleep schedule, you might want to do it slowly over a period of several days to avoid problems before you even set off. For longer trips, though, it might be just the ticket.

Failing all this, however, you could just try and conk out. "Slow TV" is available on airlines like British Airways and it's specially-designed in flight entertainment that is supposed to lull passengers to sleep with a "hypnotic" effect. Worth a go, I guess.

More like this
6 Abortion Advocates To Follow On TikTok
By Sara Youngblood Gregory
13 Summer Solstice Quotes To Celebrate The Longest Day Of The Year
By Sadie Trombetta
The UK Abortion Laws In 2022, Explained
By Sophie McEvoy
How To Protect Your Digital Privacy If You Need An Abortion Post-Roe
By Kaitlyn Wylde
Get Even More From Bustle — Sign Up For The Newsletter