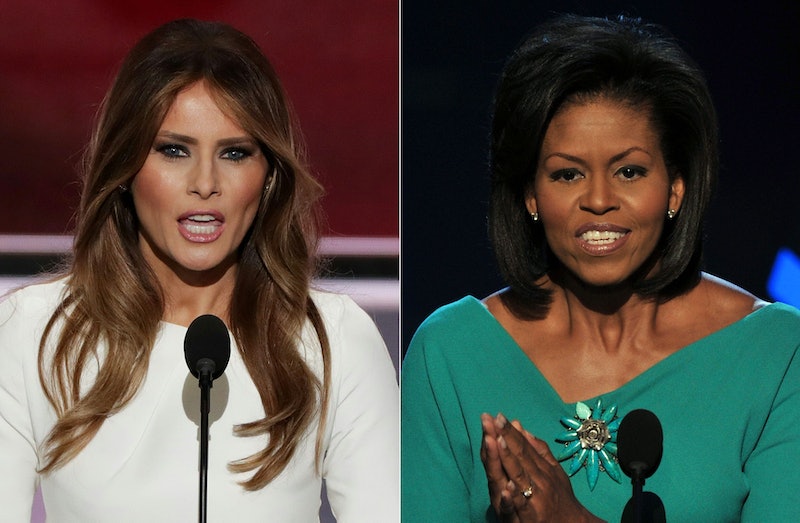 I went to elementary school with this kid who was kind of a bully, kind of ridiculous, and known to be a liar. He had this watch that he could make beep constantly. It was disruptive and incredibly annoying. We all knew it was his watch. We saw him wear it. But he would hide it in his desk and deny it. You could stand over his desk, with the beeping clearly coming from inside, and he would look you right in the eye and say he didn't have the watch. If you pulled the watch out of the desk, he would say it wasn't his. Since I woke up this morning to news of first lady hopeful Melania Trump's speech scandal and the Trump campaign's reactions to it, I've been having flashbacks of this kid.

Let's be clear about one thing: Melania Trump is not the first person, or even the first politician, to take someone else's words without attributing them. Vice President Joe Biden found himself in plagiarism hot water during his presidential run in the 1980s for taking phrases from British politician Neal Kinnock. After a video was released by Democratic challenger Michael Dukakis which put Biden's speech next to Kinnock's phrases, Biden bowed out of the race. Many more have faced plagiarism accusations and scandal. Trump booster Ben Carson and Sen. Rand Paul were both called out for not attributing parts of their respective books. Even President Barack Obama faced plagiarism accusations in 2008, when he gave a speech similar to one by Massachusetts Gov. Deval Patrick.

Where the Trump camp veers from most of those accused of plagiarism is in its absolute refusal to admit that anything happened. Carson and Paul admitted that they failed to cite their books as thoroughly as they should have. Obama explained the similarities by saying that he and Patrick were friends, but he didn't deny that the sentiments were similar. At minimum, they gave an acknowledgement of what happened.

Trump, on the other hand, is refusing to admit there is a problem. Instead of even acknowledging that parts of Melania Trump's speeches are similar to Michelle Obama's, the Trump campaign is criticizing the media and blaming presumptive Democratic nominee Hillary Clinton. Trump might be upset that the media is not letting go of what could be blip in the news cycle, but it's his own fault. He is being confronted with side-by-side comparisons and saying there is nothing to it. This is not how adults handle problems. You cannot call your opponent a liar, and then attack others for your misstep.

People on both sides of the aisle are saying Trump needs to fire someone for this. Former Trump campaign manager Corey Lewandowski said the speech was a fireable offense. But in order for Trump to fire someone, he would have to acknowledge there was a problem, and he refuses to do so. Why? Looking at Trump's history and newest statement that he is responsible for the convention being held in Cleveland (something that is not possible, since the venue was picked back in 2014), is it possible Trump is simply a compulsive liar? He might as well have a beeping watch in his hand.