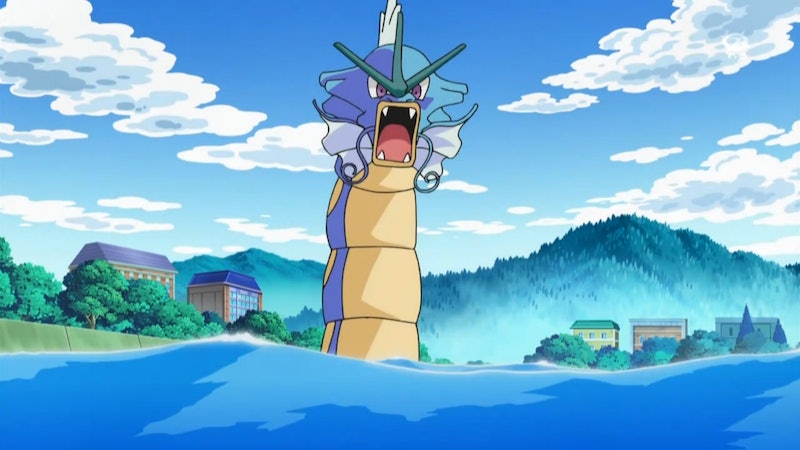 When you are playing "Pokemon Go," the wildly popular new augmented reality app from Niantic, Inc., certain Pokemon (Pidgey, Rattata, Zubat) are a dime a dozen — or should I say a candy a dozen? Others, like Snorlax, Dragonite, and Charizard, are far more rare. Catching a Gyarados in "Pokemon Go" is one of the hardest feats of them all, as Pokemon Trainers based in New York City know: when one popped up outside of Central Park on July 18, hundreds of people rushed outside to capture the water dragon Pokemon — including Justin Bieber, who, for once in his life, was not the center of attention. That's because all those "Pokemon Go" players had their priorities straight and knew that they were Trainers first and Beliebers second. Sorry, JBeebz.

I don't live in NYC, meaning that, sadly, I didn't catch that Gyarados. Hearing about the Pokemon-inspired stampede did make me wonder how I could nab one of my own. After all, Gyarados is the Neville Longbottom of the Pokemon world: it starts out as Magikarp, a 100 percent useless creature that does nothing but flop around. But once Magikarp reaches a high enough level, it evolves into Gyarados, a terrifying creature that can shoot energy beams out of its mouth and looks like one of those extinct deep-sea leviathans that lived alongside the dinosaurs.

Levels don't really work the same way in "Pokemon Go." To evolve Pokemon, you need a certain amount of candy specific to that Pokemon's evolution chain. For example, to evolve a Pidgey into a Pidgeotto, you'll need 12 Pidgey Candy. To evolve a Pidgeotto into a Pidgeot, that number increases to 50. For what it's worth, 50 is the standard amount of candy needed for an evolution to a high-powered form, but that's not so for Magikarp. In order to evolve a Magikarp into a Gyarados, you'll need 400 Magikarp candy.

Although I've never seen one, Magikarp are supposed to be pretty common, so it's possible to catch the 100-plus Magikarp you'll need to get a Gyarados. Alternatively, you can try to catch a Gyarados right off the bat. But there's a reason why hundreds of New Yorkers rushed to the spawn location of the Bieber Gyarados: it's really, really hard to find. According to this GameFaqs thread, it is possible to find a Gyarados in the wild... but if I haven't even found a Magikarp yet, you can bet I haven't found a Gyarados, and I'm Level 14.

Your odds may be better if you live somewhere else (I live near a river, so go figure). And if you catch one, then you will understand these "Pokemon Go" GIFs.