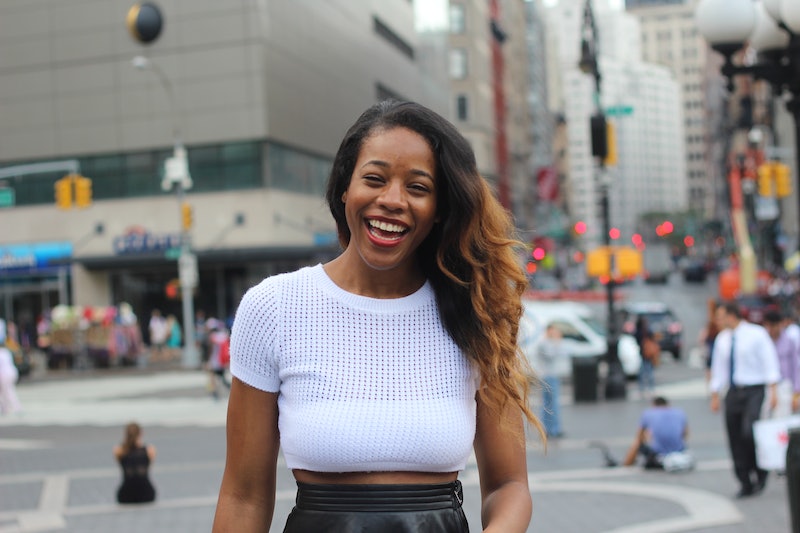 I've been a Christian for as long as I can remember — and, even though I may not have realized it at the time, I've been a feminist for just as long. Growing up, I was never spoon-fed scriptures about my status and supposed purpose as a woman. But my "role" as a girl was made clear to me by the way my sisters, brothers and I were treated. Each day, my sisters and I cooked, cleaned and cared for our younger sibling, while the boys' tasks were simple: take out the trash and/or sweep the hallway (which they rarely did). I was often made to feel guilty if I did not do these things, and it was ingrained in my mind that if I didn't do them, they would not get done and I would be selfish for not doing them. For a reason I didn't understand at the time, I was never comfortable with this. Now I realize that it is because I am a feminist — and I was then, too.

In fact, I remember the moment I became a feminist — a person who, as Chimamanda Ngozi Adichie so accurately put it, believes in the social, political and economic equality of the sexes. Throughout my childhood, my older sister and I always shared a bedroom while my brothers almost always had their own. One day, in my early teen years, I asked my mother why my brothers had their own bedrooms and my sister and I always had to share. She looked agitated and replied, "because they're boys. You know how that goes."

When I began to fully embrace my Christian faith in my late teens and early 20s, I found a deeply fulfilling love, joy and peace in it. It was a secure foundation on which I could build my morality, identity and life. However, as I sat in numerous churches, I couldn't ignore the slight pang of offense I felt in my heart when preachers encouraged women in the congregation to be "quiet" and "submissive," to not pursue careers as pastors and to instead learn to be a "good wife." I shook my head in disgust when Christian men would tell me that children and marriage should be of prime importance in my life and that I was made to "help" my "future husband" achieve the purpose God has for his life — as though God did not have one for me, too. They would tack on "because that's God's will" at the end of these oppressive, sexist statements — as if the addition made their comments okay.

It seems that when it comes to patriarchy and the scriptures that appear to promote it, we Christians have failed to study the verses in-depth. We have failed to uncover the true meaning and intent, and instead take them at face value. We as a society have done and continue to do this for one reason: patriarchy suits us. It is a foundational component of our society — of our society, I will stress, but not God's original will for humanity as reflected in scripture.

My beliefs as a feminist were initially shaped by all of the injustices and instances of oppression that I experienced growing up. As I young girl (and a young feminist) I would read scriptures that appeared sexist and I knew that I had to be missing something. Jesus couldn't be sexist, could he? Of course not. Many of the scriptures that appear to promote patriarchy are simply a reflection of the cultural attitudes of the time in which they were written. Not the actual teachings of Jesus or God's will.

It breaks my heart that people have reduced the love Jesus has for me to a set of sexist roles and gender expectations that are more a result of socialization than God's written word in the Bible. I am angry. With that, here are my beliefs as a Christian feminist.

1. Jesus Is My Favorite Feminist

Yes, the Christ himself. Jesus had a countercultural attitude toward women. At a time when women were uneducated, looked down on and viewed as property, Jesus spoke with the Samaritan woman at the well (John 4), he defended a woman caught in adultery (John 8:1-11) and he healed the woman who's illness caused her to bleed constantly, instead of shunning her (Mark 5:25-34) — which many would have done at that time.

As Christians, we are called to strive to be like Jesus — so if Christ boldly treated all women like human beings worthy of respect and consideration, we should too. Sexism and patriarchy are deeply rooted in all areas of modern society, so, as Christians, we are to follow Christ’s lead by being different, and that includes treating women as equals in every way.

After all, scripture says in Acts 10 that “God is no respecter of persons” and accepts all of his followers without condition — so, he treats and loves us all equally regardless of our gender.

In her book Jesus Feminist , Sarah Bessey puts it plainly (and boldly): “Patriarchy is not God’s dream for humanity. It never was; it never will be. Instead, in Christ, and because of Christ, we are invited to participate in the Kingdom of God through redemptive movement — for both men and women — toward equality and freedom.”

If we studied the New Testament scriptures that seem to encourage patriarchy and perpetuate the idea of women's inferiority, we would see that they are a reflection of the Greco-Roman patriarchal household codes. The sexism and status of women during that time period have no place in modern society.

I’ve gotten into my fair share of debates about the controversial scriptures encouraging women to “submit” to their husbands (Colossians 3:18) and "learn in quietness and full submission" (1 Timothy 2:11).

I’ve had many Christian men mansplain “Godly submission” to me and romanticize it, as though submission were some badge of honor. And it may be for some —that’s totally fine. But usually, when I ask these men if they would submit to their wives in any situation, I receive looks of disgust and sharp objections. So, it seems submission is only an “honor” when applied to women. (Obviously, not all women are married, so speaking to a single woman as though she is married, or as though marriage should be her primary focus, is a direct result of patriarchy, too).

The reason one-way submission is unjust (and hypocritical) is simple. Luke 6:31 says “Do to others as you would have them do to you.” If you find yourself meeting the idea of submission with disdain, then don’t inflict it on someone else.

The Amplified Bible translation expands on the "submission" scriptures: "Wives, be subject to your husbands [subordinate and adapt yourselves to them] as is right and fitting and your proper duty to the Lord."

That doesn’t sound too romantic or loving to me.

I believe that scripture teaches mutual submission in marriage — that a marriage should be a union of love, equality and fairness. When God first introduces women, in Genesis, we are called "ezer kenegdo." The Hebrew phrase has long been translated as "helpmeet" — however, theologian and Biblical scholar Victor P. Hamilton explains in his book, The Book of Genesis, that the Hebrew "ezer kenegdo" means "helper suitable." (Hamilton even notes that the word is masculine in gender and is often used in scripture to describe God as a "helper").

Hamilton writes: "[Kenegdo] suggests that what God creates for Adam will correspond to him. Thus the new creation will be neither a superior nor an inferior, but an equal. "

As I navigate the world as a modern-day woman, I can’t help but notice the many sexist practices we have wrongly attributed to God’s word. For example, I was on a date a few months ago and, as usual, I insisted on paying for my own meal. This infuriated my date, a Christian man, and he proceeded to tell me how it was his “job” as “the man” to “provide” for me during our date.

I asked him if he could show me a scripture in the Bible that said “Men, pay for your date’s meal because you’re the man and it’s your job to provide.” Of course, he could not. (Actually, the Bible says in Proverbs 31 that a “virtuous woman” “provides food for her family,” but I’ll sip my tea.)

Christianity, at its core, is receiving the love God has for us and working to spread that love to the world, thus bringing God glory. That should be our goal as Christians. It breaks my heart that we have let the injustice of patriarchy hinder us from loving people equally. Patriarchy says that we are to expect certain characteristics and actions from a person based on their sex. This way of thinking strips people of their individuality and the harmful expectations we assign to people only lead to hardened hearts when people fail to meet those expectations. We can't love with hardened hearts.

4. I Don't Want Children, and God Is Okay With That

When I tell my Christian friends (or anyone else, for that matter) that I don't want children, I usually get responses like "Oh, you'll change your mind," "You don't mean that," or, my personal favorite, "I rebuke that in the name of Jesus." We'll disregard how rude and dismissive all of those statements are. But I will say, my goal in life is to honor God and fulfill the destiny He has for my life, and there's a possibility that my destiny does not include children.

I simply do not have the desire to birth or raise children. In biblical times, children brought honor to a woman, and a woman who could not have children was shunned and looked down on. Thank God we live in different times now — for the most part.

Psalm 37:4 says that if we "delight" ourselves in the Lord, He will give us the desires of our heart. My delight is in the Lord, and he knows what I want out of life, and he surely knows that motherhood is not a desire of mine. Surely a good God, like the one we Christians serve, would not give me something I do not want.

We as Christians, and as a society, seem to define womanhood by choosing or not choosing motherhood. I am much more than that — God says so.

5. Feminism is For Everyone — Even Christians

If we would be honest with ourselves, we Christians would admit that fundamental Christianity has fueled the fire of many injustices throughout the centuries. The twisting and perversion of God’s word has led to the slaughter of thousands, upheld the institution of slavery for years and secured for patriarchy and sexism a place in society.

History has proven that patriarchy has long been a tool of oppression. And the worst thing patriarchy does for Christianity is trick our Deborahs (Judges 5) into believing they are Jezebels (1 &2 Kings).

Rejecting patriarchy will be great for men, too. Without the harmful expectations placed on men to be emotionless, sole providers and strong 150 percent of the time, men will be free to be themselves and to be who God called them to be.

In my eyes, Christians should be on the front lines of the feminist movement, because God is a God of justice who loves us all equally — and we should aim to perfect those traits within the church, and within ourselves.