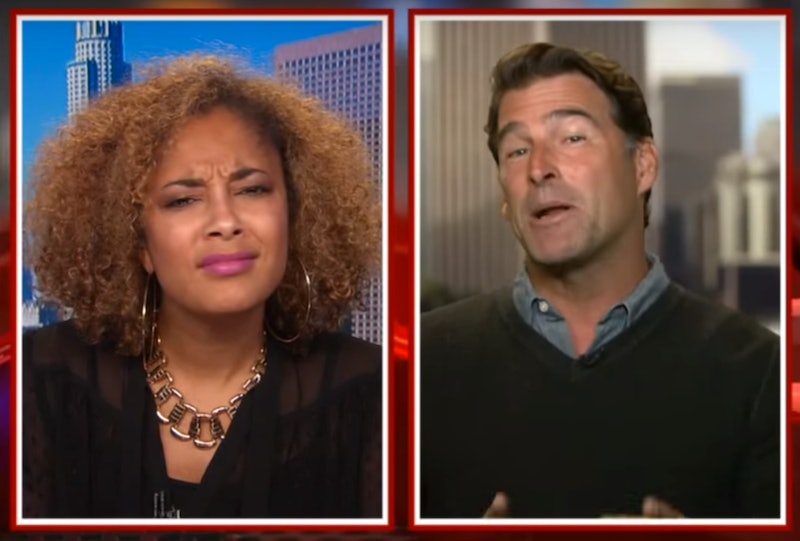 We’ve had some high-profile cases of “mansplaining” in the last year, perhaps most notably in a September episode of Project Greenlight, when Matt Damon “explained” diversity to a black female film producer, Effie Brown. (Yes, a thousand heads hit a thousand desks that day). But, of course, most instances of mansplaining don’t make the news; usually, they are subtle things — interruptions and unasked-for explanations that often have the women on the receiving end wondering if they’re actually being patronized, or if they’re simply being overly sensitive. Women encounter these sly “mansplanations” every day, and, though they may not seem like a big deal in the moment, they have a real affect on how women move and operate in the world.

“Mansplain” may be a mash-up of “man” and “explain” (and if you think it’s a silly-sounding word, that’s totally fair), but “mansplaining” is not simply an issue of men explaining things. Most of the time, there’s nothing wrong with men explaining things! If someone, regardless of gender, doesn’t know or understand something, and a man does, then by all means, he should explain it! Men can absolutely, without offense, explain things to women and to other men. And women can explain things to men, and to other women, and anyone can explain anything to anyone else. Information is awesome! Explanations are great!

But here’s what makes “mansplaining” different: When a man “mansplains” something to a woman, he interrupts or speaks over her to explain something that she already knows — indeed, something in which she may already be an expert — on the assumption that he must know more than she does. In many cases, the explanation has to do specifically with things that are unique to women — their bodies, their experiences, their lives. When men interrupt or presume to correct a woman who is speaking of her own experience or expertise, they are implying that she is ignorant, that she is incapable of having authoritative knowledge. They are saying, essentially, “Shh. I know best.”

Although women certainly can interrupt and speak over men and other women in ways that are inappropriate (and men can certainly interrupt other men inappropriately, too), “mansplaining” is a particularly gendered issue, arising from a culture that implicitly values men’s voices over women’s. Research supports the idea that men take of more verbal “space” than women: As Bitch Magazine points out, studies have shown that women are interrupted more than men, men account for 75 percent of speech during business meetings, men dominate classroom discussions, and men’s tweets are even retweeted almost twice as much as those of female Twitter users.

That isn’t to say that all men “mansplain” or that those who do do so on purpose — I would argue that the vast majority of men don’t wake up and think, “Gosh! I wonder how I can devalue women’s experiences today!” But guys who “mansplain” — guys who just can’t stop themselves from “helping out” women with unsolicited and misinformed explanations — are products of the culture we’re living in, a culture that conditions everyone, men and women, to accept these conversational dynamics as the norm.

In her essay on the subject, “Men Explain Things To Me,” Rebecca Solnit recounts a party in which a man presumed to explain her own book — yes, the book that she wrote — to her. She describes how these experiences, slight offenses though they may be, add up to something real and damaging:

Every woman knows what I’m talking about. It’s the presumption that makes it hard, at times, for any woman in any field; that keeps women from speaking up and from being heard when they dare; that crushes young women into silence by indicating, the way harassment on the street does, that this is not their world.

Although everyone’s experiences will vary, keep reading for a few of the ways that mansplaining may worm its way into your everyday life.

Not all street harassment involves mansplaining, but sometimes it does. A very common comment that women hear on the street is “Smile!” or “You should smile more!” In telling a woman how she should appear, how she should act in public, these guys are overwriting her actual experience (and her actual facial expression), and suggesting that they know what’s best for her. And when women protest catcalling, the catcallers often respond by saying that they’re being too sensitive, that they should be flattered, and so on. Those comments, too, are ways of negating the woman’s own experience of what has just happened.

If someone who knows you really well says you’ll like something, that’s usually valuable information to have. But when a stranger or acquaintance demands that you try something because — despite all of your protests — he knows that you’ll like it (or not like it, as the case may be), it’s rude and weird. Often, this conviction that you’ll just love [insert beverage, food, or other thing here] stems from gendered assumptions about what women like and don’t like. This isn’t about someone making a friendly suggestion (“Hey, I think you’ll like this!” or “I tried that, and it was awful! I don’t think you’ll like it.”). It’s about someone insisting that he knows more about your tastes than you do.

When a guy says he knows more about women than actual women.

Any time someone mentions the word “mansplain,” my first thought is of this 2014 clip from CNN, in which Steve Santagati explains the issue of street harassment to host Fredericka Whitfield and fellow guest Amanda Seales. He says,

I'm more of an expert than you, and I'll tell you why. I'm a guy, and I know how we think! More than you guys will ever know. … The bottom line is this, ladies: You would not care if all these guys were hot. They would be bolstering your self-esteem, bolstering your ego, there is nothing more that a woman likes to hear than how pretty she is.

Amanda Seales’ face says it all:

(Seriously, I cannot get enough of these gifs.)

This is an especially egregious example, of course, but many of us have experienced this exact dynamic in our own lives: We say something to a guy about what it’s like to be a woman in the world, or breach the topic of “sexism,” and then he swiftly shuts us down with something along the lines of “You don’t know what you’re talking about, and I do.” Men are welcome to talk about women and sexism and feminism and whatever else they’d like, and their gender certainly doesn’t disqualify them from making salient points on these subjects. But when they declare the lived experiences of women invalid, it’s mansplaining, and it’s a problem.

When a guy explains the female body to you.

Many years ago, I knew a guy who insisted to me that women pee out of their vaginas, and disagreed with me when I said that, actually, women pee out of a small hole called the “urethra.” To be fair, he eventually accepted what I had to say, but I thought it was bizarre that he would argue with me about an aspect of my own anatomy in the first place. I had no problem with the fact that this boy in his late teens didn’t know everything about the female body — but I did have an issue with the fact that he still assumed he knew more about it than I did.

Having your field of expertise explained to you.

There’s a whole blog devoted to mansplaining in academia, called “Academic Men Explain Things To Me.” Many of the posts describe incidents in which women who are experts in their fields encounter men who feel the need to explain the fundamentals of their jobs to them. One post reads,

Today a male co-worker, who is into reading ‘popular science’ books, explained to me what a black hole was, and that 'COMPLICATED MATHEMATICAL EQUATIONS’ were used to predict the existence of black holes. I had just told him I studied nuclear astrophysics at university.

Eesh. Of course, this kind of behavior occurs in all fields, not just academia. No one should feel the need to explain your own job to you.

Situations in which women are often seen as “outsiders.”

A few years ago, I took my car in to for a routine service. An few hours later, the mechanic called me to tell me that my vehicle was in dire need of another maintenance service that happened to cost $400. When I said that I’d like to get a second opinion before proceeding, the guy spoke over my protests to tell me that I was being unreasonable, that they had already begun to “open up” my car for the service (?!), and that I SHOULD JUST TRUST HIS EXPERTISE. I think his strategy was that if he just insisted enough that he was going to perform the $400 job, I would eventually give in and let him. When a male friend of mine went to the same mechanic a few weeks later, the mechanic suggested the same costly service for his car, my friend gave a succinct “No,” and nothing more was said about it. (And I did get a second opinion, and that "essential maintenance" was not, in fact, essential at all).

There are certain fields that are traditionally dominated by men, and there are some women out there who know a lot about those fields, and some who don’t. Whatever your level of expertise may be, you are allowed to voice your questions and concerns, without being treated like an ignorant child.

More like this
Beyoncé & Madonna’s “Break My Soul” Remix Honors A Group Of Black Icons
By Stephanie Topacio Long
22 Movies On Netflix That Are Perfect For The Whole Family
By Bustle Editors
Your Daily Horoscope For August 16, 2022
By Alexandria Lettman
The “Teenage Dirtbag” Trend Is TikTok's Latest Nostalgic Obsession
By Meguire Hennes
Get Even More From Bustle — Sign Up For The Newsletter