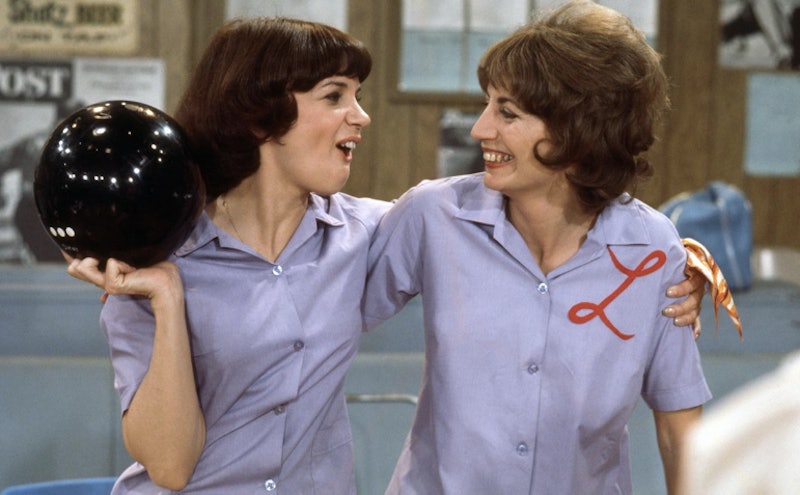 Most people probably know that Garry Marshall, who passed away on July 19 at age 81, is the man responsible for such classic Hollywood properties as Pretty Woman, The Princess Diaries, Runaway Bride, and Beaches. TV fans, of course, likely go straight to Happy Days, Mork & Mindy, and Laverne & Shirley. Among many of his iconic film projects, you might notice one very important factor: A strong focus on women. But beyond the big screen, one series of Marshall's, in particular, was greatly important for women in television. Obviously, I'm talking about Laverne & Shirley . Without discounting the fact that the Fonz and Robin Williams' beloved alien from outer space affected television for years to come, the series that followed two single women rooming and working together in Milwaukee was one of the first examples of true female friendship and independence on television and it's imperative that this facet of his many successes goes down in history as part of Marshall's extensive legacy.

Preceded by the largely successful Mary Tyler Moore Show, which ended in 1977, Laverne & Shirley continued to diversify the realities of women's lives as seen on television. With Mary Tyler Moore, we saw an ambitious, single woman making it on her own in the big(ish) city, and when Marshall's series came on the scene in 1976, it took the conversation further. Laverne DeFazio (Marshall's sister, Penny Marshall) and Shirley Feeney (Cindy Williams) were not only following a path other than the prescribed love, marriage, babies trajectory that was the perceived norm for women. The duo at the heart of the show were roommates, making lives for themselves together, without the framework that most women felt the need to construct. What they lacked in high powered ambition that we saw from Moore, the made up for in their example of true female friendship.

And while we'd seen friendship on television before Laverne & Shirley showed up on the scene, Marshall's series proved something more impactful than it generally gets credit for: It showed that friendship between women was not only worth exploring on television, but that it was a financially viable endeavor. Audiences tuned into the series for eight straight seasons, laying the groundwork for series like The Golden Girls, Sex And The City, and hell, we could even trace this line to Broad City.

But even more impactful that its commercial success might be the fact that these women steered the success of their lives together. They were not competing, they were partners in crime in the truest sense of the phrase, and the lyrics of the theme song drive that message home:

The entire theme song is built on "we," and in case it wasn't clear that these soul sisters were in this thing together, the final two lines of the song drive it home: "Make all our dreams come true/ For me and you."

If that doesn't hit you right in the feels, I don't know what will.

More like this
24 Years Ago, 'Friends' Dropped Its Most Underrated Ross & Rachel Episode
By Grace Wehniainen
Netflix Reveals First Look At Wednesday In The 'Addams Family' Spinoff Series
By Bustle Editors
UK Viewers Will Have To Wait To Watch The Handmaid’s Tale S5
By Maxine Harrison
20 Photos Of The 'Hocus Pocus' Cast Then & Now
By Radhika Menon
Get Even More From Bustle — Sign Up For The Newsletter