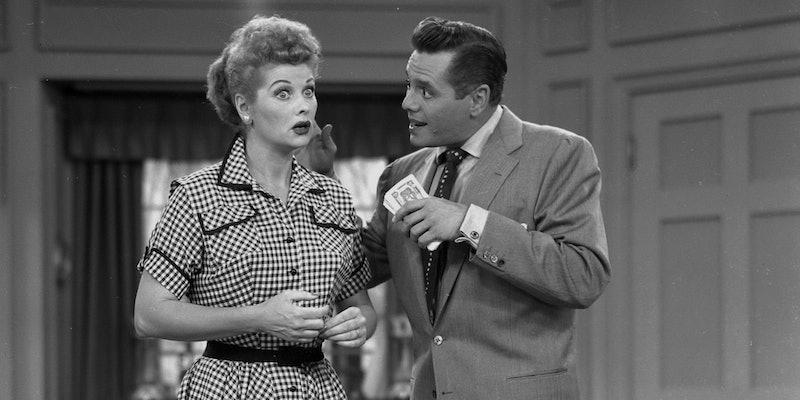 Growing up, my family never had cable or satellite television. But when I did get to watch TV at my grandparents' house, I was always super stoked when I had more than three channels to choose from — especially if one of those channels was Nickelodeon. Not only did I love Nickelodeon's daytime lineup, but I absolutely adored all of Nick at Nite's shows.

On the nights I did end up staying over at my grandparent's house, I would watch Nick at Nite (which didn't even start until I was supposed to be going to bed) until midnight. Although Nick at Nite was all live action shows, (many of them in black and white) and I was predominantly into colorful animation as a kid, I just couldn't get enough of it. Even when my grandpa would come in the guest room at 10 p.m. and halfheartedly tell me I should get some sleep, I'd just nod, kiss him on the cheek, turn the TV down after he left the room, and keep on watching. I loved Nick at Nite, and even though I haven't watched it in years I can still tell you all about my favorites from the Nick at Nite lineup of my '90s childhood and '00s preteen-dom.

So, if you loved Nick at Nite and all its retro-glory too, this list is for you. Here are, in my opinion, the 11 best Nick at Nite shows, ranked.

The Wonder Years was obviously my least favorite Nick at Nite show on this list, hence it's ranking. I don't know if it was the constant narration by grown up Kevin that threw me off or the fact that, in most cases, I prefer shows with female leads, but I just didn't dig The Wonder Years all that much. It was hugely popular though, and it's undeniable that young Fred Savage did a great job, so I still think it deserves to make the cut.

I'm not going to lie, there were some nights when The Mary Tyler Moore Show was just a touch too grown up for me. And by grown up, I mean boring. But even with the grown up jokes that I didn't always get and the grown up situations I couldn't relate to yet, I was still drawn to this show. As a little girl who dreamed of one day moving to a big city and working the kind of job that required a fleet of freshly-pressed blazers, I loved watching a show that starred an independent, career-driven woman who I could look up to.

The Munsters was a weird, goofy, satirical delight. How could I not get a kick out of a show where Frankenstein's monster was the dad and an undead vampire was the mom? It wasn't my favorite, but it was pretty fun to watch. And if you're wondering whether I liked The Munsters better than The Addams Family, the answer is a resounding YES.

Happy Days would have won me over based on the theme song alone. It's just so upbeat and Beach Boys-esque that I've always loved it. But even if the theme song had sucked, all that sock-hopping and burger eating and jukebox punching (courtesy of the Fonz) would have made up for it. Plus, I had a thing for the music and fashions of the '50s and '60s when I was a kid, and Happy Days was full of that stuff.

I can barely watch The Brady Bunch as an adult. It's just a touch too wholesome for me, and as a 25 year old who is more or less ambivalent about both children and marriage right now, a show about a family of eight just doesn't appeal to me. But I loved this show as a kid. I have two siblings, tons of cousins, and my parents never separated or divorced so I could kind of relate to the large family thing. Of course, as the "baby" of the family I never cared for how incessantly whiny Lucy was portrayed, but I get it. (Babies of the family do always get away with more crap than their older siblings, myself included.)

What I loved about Laverne and Shirley was the fact that it was all about two hardworking female best friends. It was one of the first grown up shows I remember watching with a storyline mostly focused on two dedicated girlfriends who went on lots of fun, stupid adventures together rather than focusing primarily on their love lives or lack thereof. I'm not saying it was as feminist or deep as Girls or anything, but it was a start, and it was funny, and I liked it.

I loved The Beverly Hillbillies as a kid for so many reasons. It's cute, it's funny, the theme song is fun and folksy, and it's just a feel-good show. Also, embarrassingly enough, it's kind of relatable for me.

I'm from the Missouri Ozarks, so, my family essentially is The Beverly Hillbillies. My sister's name is Ellie (like Elly May Clampet), my brother's played the fiddle since we were little, my mom had a pet bobcat at one point, my granny says, "vittles" and cooks collard greens and hog jowl on a regular basis, I'm pretty sure I love animals even more than Ellie May did, and I've eaten squirrel (against my will) more than once. So, yeah, I appreciated the heck out of this show, and still do.

I always got super excited when Three's Company was about to come on. I love shows with strong ensemble casts, and everyone in this show was hilarious — but especially John Ritter. All the physical comedy and amusing sneakiness that Jack's character put himself through was hugely entertaining too. Plus, the show is set in Santa Monica so every single episode had the appealing backdrop of gorgeous weather.

3. I Dream of Jeannie

Okay, let me start by saying I had a huge crush on Jeannie, and I also wanted to steal all of her midriff-bearing outfits. And her hairdo. And her lamp. Okay, I kind of wanted to be her — but not really. I hate being ordered around, especially by men, so I couldn't have handled Jeannie's gig for very long. But she was pretty impressive and incredibly entertaining. I mean, she was a 2,000 year old genie who granted wishes with a simple head nod. Plus, the intro is almost as fun to watch as the show itself and the theme song is dancy as hell.

Who doesn't love Bewitched ? The theme song is perfection, the animated intro is adorable, Samantha is an amazing witch, and we can all relate to having nosy, judgmental neighbors. Although as an adult I have a hard time reconciling some of the anti-feminist themes of this show, (like Samantha's attempts to suppress her magic at the request of her husband) I loved this show so much as a kid that I'd actually go around wiggling my nose and hoping to make something magical happen every time I watched it.

Hell, I just tried it again. Alas, I will never have Sam's magical powers. Or her button nose.

Lucy was, without a doubt, my main chick as far as Nick at Nite chicks go. How could I not list I Love Lucy as number one? Lucille Ball was and always will be a comedic icon, and her show will never stop being a classic. I always loved how real and fun and hilarious Lucy and Ethel's friendship was, and I'll always have a soft spot for Ricky Ricardo too. But more than anything, I loved this show because there wasn't a single bad episode. I never even thought of changing the channel during Nick at Nite's I Love Lucy time slot, and I laughed so hard it actually hurt a little. Especially during that famous candy factory scene.