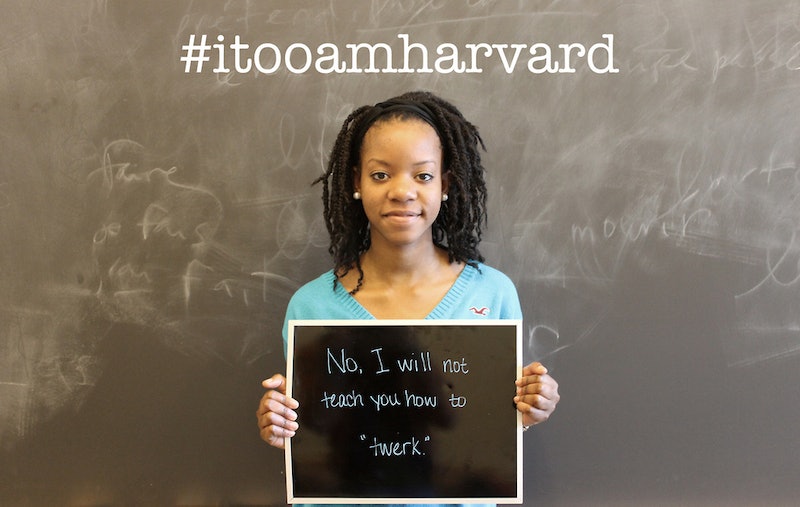 Being black at an Ivy League institution is not always easy, and Harvard University students are too smart to pretend otherwise. A multimedia project called “I, Am, Too, Harvard” is illuminating the struggles black students encounter at the prestigious college. The project began when Sophomore Kimiko Matsuda-Lawrence conducted an independent study that saw her interview more than 40 black Harvard students. Matsuda-Lawrence discovered that many black students were encountering a multitude of common challenges, but didn't have a space to discuss their issues.

“Often we are questioned, dismissed, brushed off as oversensitive,” Matsuda-Lawrence told USA Today.

A reflection of this idea appears on the “I, Am, Too, Harvard” Tumblr page. The manifesto reads, in part:

Our voices often go unheard on this campus. Our experiences are devalued, our presence is questioned — this project is our way of speaking back, of claiming this campus, of standing up to say: We are here. This place is ours.

Matsuda-Lawrence curated portraits, videos, and other multimedia elements to capture some of the challenges black students have encountered.

Matsuda-Lawrence has since expanded the project into a play that’s set to debut at Harvard’s Black Arts Festival. In a video promoting the upcoming play, Matsuda-Lawrence traces racial tensions to a Harvard Crimson column that supported anti-affirmative action policies in the wake of Abigail Fisher’s case against the University of Texas-Austin.

Given Harvard University’s black student population — which fluctuates between 10.2 percent and 11.8 percent — race-conscious admissions should be required. However, as is common on other Ivy League campuses, black students often field micro-aggressive comments from fellow students like “You’re LUCKY to be black … so easy to get into college!” These veiled insults can lead to a feeling of isolation in the classroom and other campus spaces for students of color.

The reach of the #BBUM campaign caused the University of Michigan’s administration to respond to requests for increased enrollment of black students. Martha Pollack, the University of Michigan’s provost, announced that the school would create a position focused entirely on increasing minority enrollment. Additionally, she agreed to increase the effectiveness of a current program that’s designed to foster conversations about “inclusive leadership, personal and social identity, and bystander intervention.”

The #BBUM campaign sparked similar conversations at Georgetown and UCLA. It is now rippling through the halls of Harvard.

“We’re part of a nationwide movement of black student activism,” Matsuda-Lawrence told USA Today. “We haven’t started this, but we’re hoping we can add to the movement and speak up against racism on college campuses.”

Matsuda-Lawrence hopes she and her peers can create an “active dialogue” with Harvard’s administration and eventually increase the numbers of black students enrolling at the university.

Donald Pfister, interim dean of Harvard College, is commending the “I, Am, Harvard, Too” campaign for increasing dialogue about diversity at the university. In an email to undergraduate body, he wrote:

Harvard is a place where the community supports and fosters conversations, ideas, and creativity. Harvard is also about inclusion. This photo campaign, based on a play which will premiere Friday night, is a great example of students speaking about how we can become a stronger community. ‘I, Too, Am Harvard’ makes clear that our conversation about community does not and should not stop.

One of the first concepts students are taught in Critical Race Theory is that race always matters. It is impossible to escape blackness and the connotations associated with it.

As a student at a predominantly white institution, I am more aware of my blackness than I’ve ever been in the past. Choosing to take a stand — as the students at Harvard University have done — is courageous and worthy of praise.

It also serves as a lesson: You can’t escape blackness. Even at Harvard.

Images courtesy of "I, Too, Am, Harvard" Tumblr