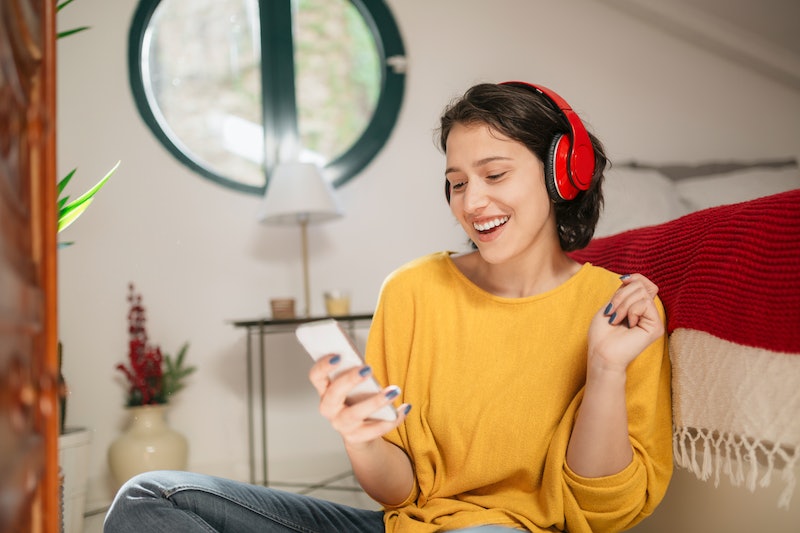 Regularly and half-jokingly described as radio for Millennials, podcasts can be great resources for those of us who want to become more clued-up on various feminist and socio-political theories, but can’t bare the thought of burying our heads in wordy academic texts. With the best podcasts coming off more like an informal, non-intimidating chat between girlfriends than a heavy or intense debate, their content often relies on opinion and lived experience.

Offering a more personal perspective on popular culture, whether you’re into comedy, activism, or more serious subject matter such as advice on overcoming an eating disorder, there’s undoubtedly a feminism-fueled podcast to fulfill your every need. Below I've outlined 11 of the best on the airwaves.

A newcomer to the podcast game, Mixed Spices is an uncensored, inclusive platform for women and non-binary people to discuss the issues close to their hearts. Hailing from London, each episode features guests such as women of color-collective Born ‘n’ Bread and feminist film organization Reel Good Film Club members.

Reclaiming the term from the contemporary thin, able-bodied white narrative, each episode is brilliantly named (for example “Crush Fat Oppression Like You’re Sitting On Its Face For Fun") and expertly analyzes specific elements of the conversation surrounding our weight.

Bustle's contribution to the body positive podcast game hosted by Associate Fashion And Beauty Editor Marie Southard Ospina, The BodCast analyzes different facets of the fat existence. Reconnecting body positivity with the movement's original roots in activism, Southard Ospina often teams up with another figure from the body positivity or fat activist communities to discuss the intricacies and differences of living life as a plus size person.

A positive look at recovering from an eating disorder, this podcast features survivors — or "recovery warriors" — sharing their journeys to overcoming their conditions, with plenty of advice for others trying to do the same. Also offering practical tips from professionals, The Recovery Warrior Show takes important steps to de-stigmatize talking about eating disorders.

This English podcast tackles the idea of being a "bad feminist," something most of us have likely likely felt like at one point or another in our lives. Offering insightful and slightly tongue-in-cheek debates on how we can better our feminist ideologies, the two hosts tackle issues we’re all meant to agree on, but never quite manage to do so, on a weekly basis.

Ever been halfway across the country or world, out of your call allowance, and longing for an overdue chat with your bestie? This is the podcast for you. Featuring interviews with inspiring women so many of us wish we could call our best friends — á la Tavi Gevinson — the hosts promise both high and lowbrow ranting on topics ranging from Beyoncé to fashion to feminism.

This audio offering does exactly what it says on the tin. Hosted by a beauty writer, a community organizer, and a self-confessed podcaster, Black Girls Talking covers topics ranging from body oils and beauty boxes to in-depth discussions about Master Of None.

Aiming to shine a torch on often underrepresented and under-appreciated people of color creatives, The Back Talk — unlike many other podcasts — usually centers around one individual or experience. Featuring spoken essays and anecdotes, the show aims to provide a platform for young creatives to shine and share their work.

Aiming to provide a more authentic antidote to the current rise in representation of queer voices in popular culture, Queer Inquiries invites and encourages real voices to become part of the dialogue in order to steer the conversation surrounding queer identities.

Often featuring a group of queer-identified people all chiming in on topics such as the greatest things about queer sex, defining queerness, and growing up queer, I'm patiently waiting for the next expected episode — brilliantly titled "The Femme-isode."

Acting as more of an irresponsible aunty, Stuff Mom Never Told You covers exactly that: Topics your mother would probably go red in the face at the mere mention of. From the biological nitty gritty to facets of popular culture you may not have been exposed to as a child — such as queer romantic comedies — this podcast is the little black book every female-identified person needs coming through their headphones.

So, fancy learning something new on your way to work? Spend your next commute listening to any of these podcasts — all of which are guaranteed to widen your feminist consciousness and body politics, all the while being hugely entertaining.