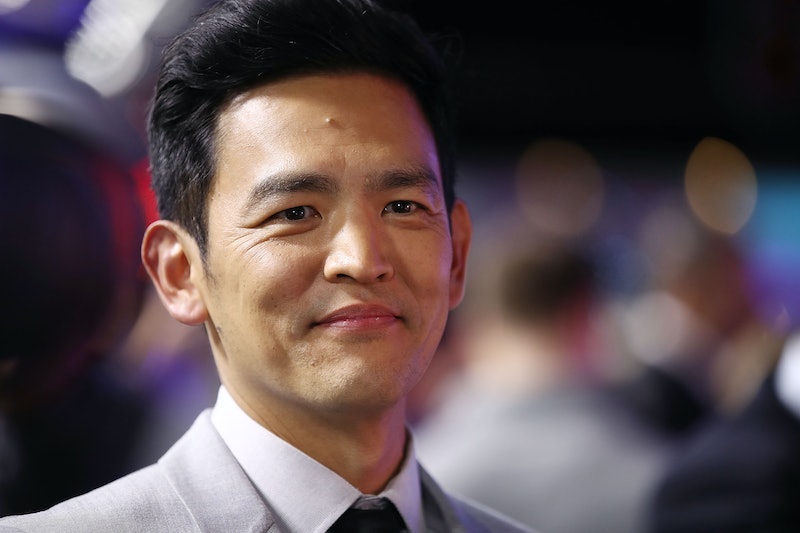 No matter where the Starship Enterprise has traveled, no matter what evil human and/or alien forces its crew has battled, its true mission has always stayed the same: to introduce a future in which diversity is no longer noteworthy. The original Star Trek series broke ground with its diverse cast when it premiered in 1966, and the series made television history when it featured one of the first interracial kisses on TV. And the franchised continued to make diversity a priority even after Star Trek was cancelled in 1969. Over 20 years later, Star Trek: Deep Space Nine featured the franchise's first black commanding officer, and Star Trek: Voyager followed by introducing a female commanding officer. Now, in Star Trek Beyond, we finally have our first main LGBT character. By developing the character of Sulu, who's also notable for being the only main Asian actor in the franchise, Star Trek Beyond pushes the envelope of diversity on film, while also daring other Hollywood movies to do better.

Although the Star Trek universe could still use more diversity — 2009's Star Trek featured a crew with the same ethnic makeup as the original: four white men (Bones, Chekov, Kirk, and Spock), one Asian-American (Sulu), and one black woman (Uhura) — Star Trek Beyond expands that diversity beyond the main crew with a noticeably diverse cast of extras, the addition of complex women in supporting roles, and, most notably, Sulu. Sulu has been a stereotype-busting character since his debut in the original series. As one of the first Asian-American characters on mainstream television, he was, as played by Japanese-American actor George Takei, for many viewers, the first really humanized Asian character they'd ever seen. "George was very important to me as a kid. Seeing his face on TV as an Asian American kid in Houston, Texas, in the early '80s, was very impactful for me," said John Cho, the actor who took on the role in the reboot, in an interview with The A.V. Club.

Not only was Sulu unique because of his ethnicity, but he stood out because he didn't fit the stereotype of Asians in the media. Before playing Sulu, Takei was almost always playing foreigners with strong, Asian accents — roles he himself, in an interview with Mother Jones, called "think, stereotyped, one-dimensional roles." For Takei, Sulu was the first three-dimensional Asian character he got to play, and decades later, the role is still similarly unique for an Asian actor like John Cho. Cho is arguably the most successful and well-known Asian American male actor working in Hollywood, and his roles have been diverse in both film and television. He's played a stoner in Harold & Kumar, a law enforcement agent in Flashforward, and even a romantic lead in the short-lived sitcom, Selfie (something Asian men rarely ever get to do). In Beyond, Cho plays an Asian action hero and a gay man — two roles that have also alluded Asian actors for quite some time, and the importance of this cannot be understated.

It would be easy to say that Cho's career has somehow eclipsed his race, but it would also be a mistake. As he recently said in an interview with Vulture, "While my career is f--king great for an Asian actor, I haven't been given the chance to do all that I can. And I feel like that instinct has something to do with my color." Cho's career, while hugely impressive, has been defined by his ethnicity, explicitly or not. Even the character of Sulu, an undeniably groundbreaking role, was written as specifically Asian in the 1960s, and then again in the 2000s, as the role was meant to match the ethnicity of the original. Yet while Sulu might not be an example of race-blind casting, that doesn't mean he isn't an incredibly powerful character for Asians in Hollywood. Sulu breaks all the main stereotypes of Asians in the media: he's not an engineer, or in a similarly math-oriented position on the crew. He's good in a fight — and not because he knows martial arts. He's also intimidating, and knows how to lead the crew when Captain Kirk and Sulu are needed off the bridge.

Asian male characters in Hollywood can typically be described as nerdy, meek, silent, and, yes, feminized — think Wu in Jurassic Park or Han in 2 Broke Girls. And making Sulu gay presents an entirely new challenge for filmmakers, who don't just have to worry about creating a three-dimensional Asian character and a three-dimensional gay character, but have to do both at once. Asian and gay stereotypes sometimes overlap, specifically in terms of the feminization of male characters. It's something Cho himself worried about when he found out that his character would be openly gay in Beyond. "I was concerned that Asians and Asian Americans might see it as a sort of continuing feminization of Asian men," Cho told The A.V. Club, noting how most male Asian characters are portrayed as non-sexual.

Even when they're not feminized, Asian male characters in Hollywood tend to be either mystical, martial arts champions (anything with Jackie Chan) or mythical gurus (Katsumoto in The Last Samurai). Even more progressive Asian characters, like Sun and Jin on Lost, are defined by their Asian heritage. Sulu, however, is none of these things. He's smart, strong, has dialogue (no matter how limited), and is shown as a heartthrob. In space, he's not any more or less foreign than any members of the Enterprise crew, and his Asian ethnicity is not explored, nor discussed (at least, not in the new films).

In Beyond, Sulu continues to break the stereotype of what an Asian character should be. He's a leader and a fighter when stranded and captured with Uhura, he's cocky and fun, and he has something none of the other characters have: a life outside the Enterprise. 2009's Star Trek, established Spock and Uhura — an interracial couple — as the franchise's main romantic pair, and now in Star Trek Beyond, filmmakers are taking it a step further, introducing a new couple to the franchise: Sulu and his husband, Ben.

The decision to make Sulu the first gay character in Star Trek, and not, say, Chekov or Bones, has been explained as being a tribute to George Takei, the actor and LGBT activist who originated the role. Though some original Star Trek fans, including Takei himself, have had mixed reactions to the decision, saying that it was not how the character was originally envisioned, a majority of the response has been positive. People are ready for a gay Star Trek character, and, as one of the four single, male characters, Sulu being that person makes perfect sense. However, because we do not live in a post-racial society, Sulu isn't just a gay character in Star Trek, the way Chekov, Bones, or Scotty might be — he's an Asian gay character, and that comes with baggage. Cho is right to be concerned that some audiences might see Sulu's sexuality as the feminization of yet another Asian characters in Hollywood. (There's only so much Lloyd in Entourage one world can handle), but hopefully, the fact that Sulu has already established himself as a more fleshed out character in the previous films will help erase any such judgements.

In the end, the combination of Sulu's ethnicity and sexuality makes Beyond one of the most progressive and diverse movies of the year. By giving Sulu a husband and child, Beyond ensures that the character is more than just the Asian pilot, and by waiting until Beyond to do it, filmmakers have allowed Sulu to be defined by more than just his sexuality. Sulu was a groundbreaking character before Beyond, and he remains one after, but he's also a reminder of a sad truth: there aren't enough Sulus out there.

More like this
These ‘Love Actually’ Plotlines Are “Out Of Date,” According To Director Richard Curtis
By Grace Wehniainen
Kit Connor Speaks Out On “Shocking” Lack Of Bisexual Representation
By Sam Ramsden
Read Dan Levy's Heartbreaking Message After The Club Q Shooting
By Stephanie Topacio Long
Jodie Turner-Smith & Joshua Jackson's Relationship Timeline Includes Her Proposing
By Jake Viswanath
Get Even More From Bustle — Sign Up For The Newsletter