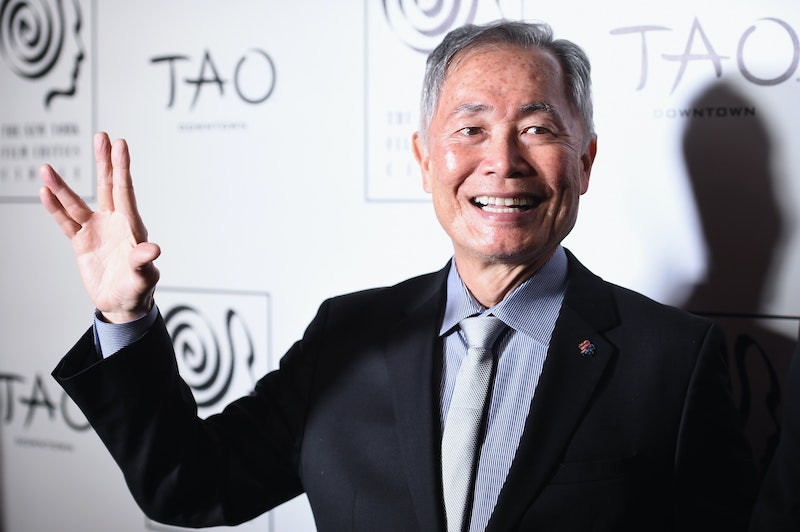 Over the past two weeks, many words have been said about screenwriter Simon Pegg's decision to reveal helmsman Hikaru Sulu as gay in Star Trek Beyond . Although actor John Cho (who plays the character in the new generation of Star Trek films) was happy to announce that the decision was made in honor of the character's original portrayer, LGBT advocate and out gay man George Takei, Takei himself called the change "very unfortunate." Since then, Takei, Pegg, and Cho — as well as Beyond director Justin Lin and Cho's co-star Zachary Quinto — have spoken at some length about the controversy. So when the topic came up in Vulture's lengthy interview with the Japanese-American icon, it wasn't exactly a surprise; what was a surprise were Takei's strong words on Star Trek producer J.J. Abrams.

In the course of the interview, Takei recalls a phone call he had with Abrams shortly after the creator of Lost had landed the gig of rebooting the Star Trek franchise and helming the first two films in the new series. Although he starts off by describing Abrams as "a very, very interesting guy, full of energy," Takei goes on to say:

The reason he wanted to talk with me was he wanted to find a Japanese-American actor to play Sulu, because I'm Japanese-American. But he'd found someone [who wasn't Japanese-American] he was interested in casting, and he wanted to know what I thought about that. I realized that J.J. really didn't understand Gene Roddenberry's thinking on Star Trek. Because from the casting of the original, you know that Roddenberry was using Starship Enterprise as a metaphor for Starship Earth, and my character was supposed to represent all of Asia. Gene's challenge was to find a name for this Asian character because every Asian surname is nationality-specific: Tanaka is Japanese, Wong is Chinese, Kim is Korean. Because it's the 23rd Century, he wanted a name that suggested Pan-Asia. He had a map of Asia pinned on his wall and he was staring at it, and one day, he found a sea called the Sulu Sea off the coast of the Philippines. And he thought, the waters of a sea touch all shores. And that's how he came up with the name Sulu.

It's a nice story, but it's also one that Takei uses to illustrate Abrams' unfamiliarity with the franchise: "So I told J.J., 'You know, that was Gene Roddenberry's vision, Pan-Asia. So, is the person you're thinking of Asian?' He said, 'Yes.' And I said, 'That's all that matters.' … Comforted by that, he went on to cast John [Cho], but the guru of the rebirth of Star Trek didn't know that history of Star Trek and what the Enterprise stands for, and why the cast was diverse." (Bustle has reached out to J.J. Abrams for comment, but have yet to receive a response.)

It seems a bit unfair to use this story against Abrams, since the reason Takei has consistently given for being opposed to Sulu as a gay man is that it isn't true to Roddenberry's original vision of the character. And yet, when Abrams did try to remain true to Roddenberry's original vision of the character by asking if he should cast an actor of the same nationality as his original portrayer, Takei claims that it proves that Abrams doesn't understand the history of the franchise. It's sort of damned if you do, damned if you don't.

But Takei isn't wrong. Abrams doesn't know the history of Star Trek — a fact he has been candid about from the beginning. In an interview with The Guardian published two days before the rebooted Star Trek premiered in the United States back in 2009, Abrams admitted that, while he was very much a self-professed "geek" growing up, he was never a Trekkie. "Star Trek always felt like a silly, campy thing," he said. "I remember appreciating it, but feeling like I didn't get it. I felt it didn't give me a way in. There was a captain, there was this first officer, they were talking a lot about adventures and not having them as much as I would've liked. Maybe I wasn't smart enough, maybe I wasn't old enough." (The original series premiered on NBC the year of Abrams' birth and ended its run a mere three seasons later.)

Not only was Abrams not a fan of the original series, he was also unfamiliar with with its five spinoff shows and 10 feature films. "I had no idea there had been 10 movies! I still haven't seen them all," he admitted to The Guardian. But he insisted that his unfamiliarity was an asset: "I didn't want to become a student of Star Trek. I felt that was actually one of the few advantages I had. I was trying to make a movie, not trying to make a Trek movie."

To be fair to Abrams, he is only the director/producer of the new series; he didn't have a hand in writing the 2009 reboot or its sequels, Into Darkness and Beyond. An intimate knowledge of the franchise is undoubtedly more essentially for the writers than the person tasked with bringing their script to the screen in the most effective way possible. And, if Abrams' goal was just "to make a movie," then he succeeded admirably — perhaps beyond anyone's wildest expectations.

The 2009 film rescued Star Trek from near disaster; the last movie, 2002's Nemesis, had been a critical nadir for the franchise and also the lowest-grossing film in the series to date, earning a limp $43 million off a $60 million budget. By contrast, Abrams' reboot was the highest-grossing film in the series, pulling in $258 million and winning rave reviews (95 percent on RottenTomatoes). Even Into Darkness was well-received, despite the loud complaints of Trekkers outraged by the film's reappropriation of the plot of fan-favorite film The Wrath Of Khan — it received a Certified Fresh 86 percent on RottenTomatoes. Currently, Lin's Beyond is currently sitting at 89 percent on that site and is predicted to take in $55-60 million dollars in its opening weekend, or about $15 million more than Nemesis made in its entire run.

So, if Abrams doesn't understand Star Trek, it's clear that he at least understands movies. And, although Takei and hardcore fans of the original series may be horrified at the action-oriented turn the franchise has taken of late, it's hard to argue with the results: namely, that Abrams has helped prevent Star Trek from sliding into obsolescence. Sometimes you have to give audiences what they want, and Abrams has excelled at repackaging Star Trek into something modern audiences will line up to see on opening weekend.

Would it be better for the Star Trek series to remain true to itself and become a relic of the past, something only diehard geeks will remember and appreciate? Or is it better for it to adapt with the times and remain a relevant cultural touchstone, even if it means changing the fabric of the franchise into something with more mass appeal? There's no easy answer to that question, but the Star Trek movies we have now are the ones that we get. (And for those who aren't head over heels for Abrams' vision of the fictional universe, we still have CBS' reboot of the TV show to look forward to.)

For all of his words about Abrams and the Sulu controversy, Takei remains supportive of both his replacement John Cho specifically and the franchise in general. "Oh, he’s a great actor," Takei said of the man now wearing Sulu's uniform. And as for Lin's Beyond, "I want to make absolutely clear that I am thrilled, overjoyed, happy, ecstatic." Hopefully the movie will live up to his — and our — expectations.