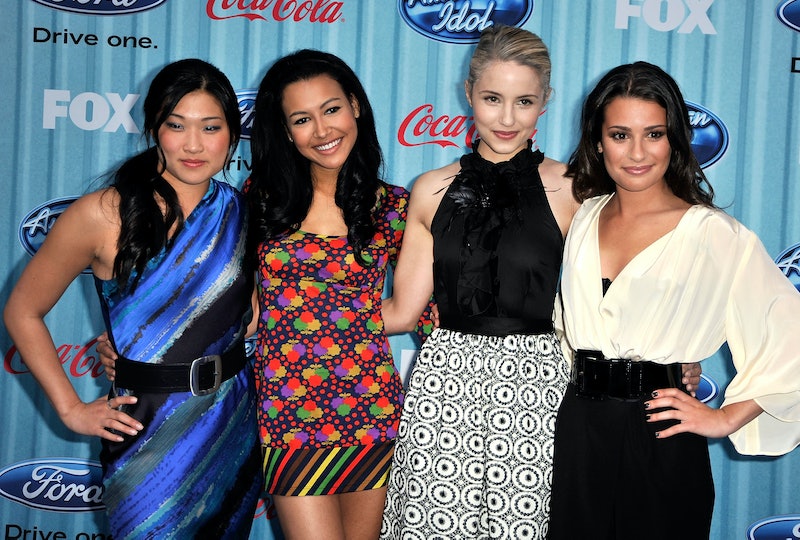 I have a very complicated relationship with all of Ryan Murphy's shows, but perhaps the most frustrating of these relationships is the one that I have with Glee. At one point in my life I looked forward to Glee on a weekly basis, thoroughly engrossed in the musical lives of the New Directions. So much has happened since that time, though, and so little of it is good. And now, everything I thought I knew about Glee is going to change. Glee is doing some major restructuring and spring cleaning, and the New Directions will no longer be a part of the story. In fact, the show will move permanently to New York, where Rachel, Santana, and Kurt have already made their home.

I'm one of the few people that I know who are still (hate) watching Glee and I have to say that I am seriously bummed out about this development. Here's a controversial opinion for you: I could not care any less about Kurt and Rachel's new life in New York. Pathetically, the reason why I still tune in is to see the drama occurring at McKinley, most of which occurs between newbies like Kitty, Marley, Ryder, Jake, and Unique. Now these characters will cease to exist in the Glee universe.

It's disappointing considering that they all have unresolved storylines.

Sure, we have the two-part 100th episode to solve these problems, but with guest stars like Gwyneth Paltrow on board, we may never get the time. Here are the 8 storylines that Glee needs to resolve in order for me to feel better about the whole McKinley-no-more thing.

What will Unique do without glee club?

Unique is a male-to-female transgendered woman (though the show shies away from ever slapping an easy label on her gender) and has often struggled with bullying at her small-minded high school. Glee club has been a powerful force in helping her learn to accept herself and stand up to bullies. What is going to happen when the New Directions falls? Will she start her own club? Join the school play? Become involved in a local LGBT chapter?

The Ryder-Marley-Jake love triangle: Who will Marley pick?

After Jake Puckerman's character assassination from earlier this season so we're thinking that Marley may lean towards nice guy Ryder. But if the show was smart, they'd have given Jake a redemptive storyline. Instead, they left him looking like a "man slut" (the show's words, not mine.)

Will and Emma are having a baby!

It's smart to have characters move on, and starting a family is a great way to go about that. Had the baby thing happened last season, it would have been fun to see Will juggling his fatherly duties with his responsibilities to the New Directions. Will we never have a chance to meet this kid?

Well, considering that she recited the Crazy Sorority Girl letter nearly verbatim in one of this season's earlier episodes, I'm going to say that she might be evil. And the fact that she stole Puckerman away from Marley... evil. And the fact that she cut down tough cookie Kitty with so much as a look, EVIL. But no matter how bad a person looks, on Glee, we'll always find their softer side. Bree's came from having a very real talk with Jake about her potential pregnancy and the way he treats girls like crap. (News flash, Bree... so do you.) She's not a major character but she certainly caused drama, and I'd like some conclusions about her character before she disappears forever.

Will Coach Beiste ever find love?

Perhaps the most angry I have ever been at Glee was when they used kind, sweet Coach Beiste as a way to bring up domestic violence. Coach Beiste, who finally found love after years and years of searching, gets her happy ending stolen when her husband becomes physically abusive. Does this happen in life? Sure. Did it have to happen on Glee to one of my favorite characters? NOPE. Please have Beiste activate her Match.com account and find a nice lacrosse coach to settle down with before we never see her again.

I like that Sue Sylvester is a bit of an enigma, but now that Sue's moving to New York, we need to understand her motivations. If we have a repeat of Sue trying to shut down the hopes and dreams of every former member of New Directions once they get to New York, I would suggest admitting her to a mental institution. No one should be that obsessed with high school students, and even Will Schuster isn't that bad.

We know that Becky was nervous about going to college, but will she finally decide to take the big leap and go away to school?

What will happen to Kitty without Artie and the New Directions?

Now that Artie's going to New York, there's little chance that Kitty will wait by the phone pining after him. Now that New Directions is done, will Kitty resume her mean girl status? Or will she continue to bond with Marley and her sophomore friends?

Come on Glee, don't leave us hanging here. Please, wrap those storylines up so we can all go home happy.