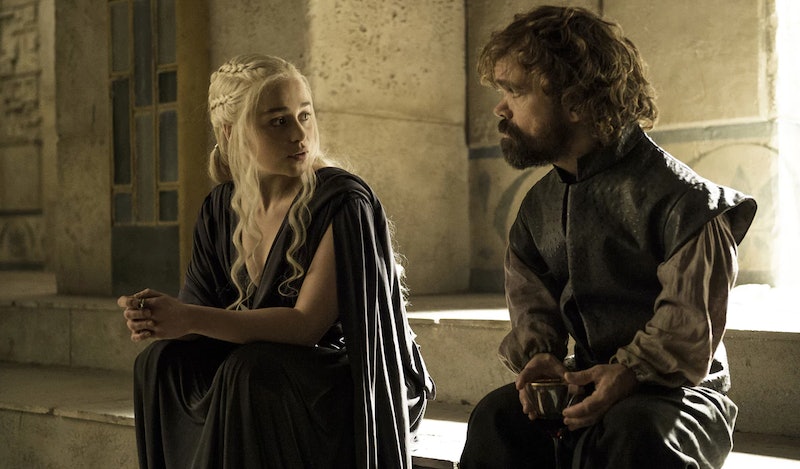 The Season 6 Game Of Thrones finale was extra-long, jam packed with storylines, and, true to GoT finale form, full of surprises. And, after the episode was over, fans were full of both satisfaction and grief. The stories had progressed to exciting new places and all of the characters are tantalizingly close to something amazing. But, it’s going to be about a year before we can find out what’s on the other side of the precipice. And, the wait for Game Of Thrones Season 7 is going to be a long one.

HBO confirmed that Game Of Thrones season 7 has been pushed to a summer 2017 premiere date because winter is here — meaning the show needed more time to film during the winter months. This delayed premiere date is making already anxious GoT fans nervous wrecks. How long will we have to wait to see the fallout from a tumultuous season 6? And, what can we do while we wait, other than speculate? With so many cliffhangers, and so much time on our hands, Game Of Thrones fans are thinking a lot about what they hope happens next season and scouring for theories to prove it. While the frustration of time can make some theories and expectations grow to be more and more outlandish, there are some predictions that hold true. Here are 22 things most Game Of Thrones would like to see next season.

I’m not an expert or anything, but I don’t think you can just stage a coup for the Iron Throne after blowing people up and everyone will be cool with it. Cersei is obviously the new mad ruler that people fear. And, it will be interesting see how this plays out in season 7.

Jaime loves Cersei, but he is also a knight who respects honor and order. This has been proven with his admiration for Brienne. I do not think Jaime is as honorable or ruled by his code as Brienne, but he will still likely question his sister’s claim to power.

3. What Will Happen To Cersei’s Hair?

How much time will pass? Are the days of Cersei’s long locks officially behind us?

4. Daenerys As The Prophesized Young Queen

Cersei was told a young queen would be her downfall. She assumed this to be Margaery and neutralized the threat. But, Cersei shouldn’t get too comfortable on that Iron Throne, Daenerys is coming.

5. Will Jon Snow Head To King’s Landing Too?

Cersei’s outrageous actions may draw armies to King’s Landing, could this mean that Jon Snow and Dany are headed for the same place?

This is the moment everyone has been waiting for. Will Dany and Jon love each other? Hate each other? Know they are related?

7. Sansa Not Being Pregnant

Please, we’re all done with Ramsay Bolton. But, if she were pregnant, I am afraid it would push her toward Littlefinger.

I really hope Sansa stays on the admirable track she has been on recently and doesn’t betray Jon for Petyr Baelish. Did anyone else laugh out loud when Baelish talked about being seated on the Iron Throne?

Arya started crossing names off that list of hers in the finale, and she’s got plenty more to go.

In the finale, Melisandre was banished from Winterfell. She’s on the move. So is Arya. And, The Huffington Post recently pointed out that Arya and The Red Lady are destined to meet again. In a telling scene from Season 3, Melisandre tells Arya, “I see a darkness in you. And, in that darkness, eyes staring back at me. Brown eyes, blue eyes, green eyes ... eyes you’ll shut forever. We will meet again.” Different colored eyes staring back?! This was the first bit of foreshadowing about the dark, dangerous many faced girl with no name. I wonder if the predestined reunion happens this season?

What the hell happened to that other red woman?

She is finally pretty close to the other Stark kids. But, she has unfinished business. I have a feeling she may check in but not stick around. She may even check in while disguised?

13. Bran Headed For His Siblings

And, considering that last vision, he’ll have news.

14. Jon Snow Finding Out About His Parents

And, I know I'm anxious to see how he will handle the Targaryen news.

C’mon Bran, who else is a secret Targaryen?

If Jon’s theory came true, so can Tyrion’s. Tyrion is likely the son of Aerys Targaryen, making him Dany’s half brother. And, it is interesting that his possible half sisters, Dany and Cersei, are heading toward a battle.

We’re not sure what Olenna, Ellaria, and Varys are up to, but I’m sure it has to do with the take down of Cersei.

There is no such thing as too much Lyanna Mormont.

Because this relationship — platonic or flirtatious — has me 'shipping them hard.

HBO confirmed that winter is here. And, this can only mean one thing for Westeros: White Walkers.

21. All That Valyrian Steel Put Into Action

Basically everyone wants Cersei dead. Honestly, I’m not sure how she’s even going to make it more than 90 seconds into Episode 1. Of course, we'll have to wait until summer 2017 to know for sure.