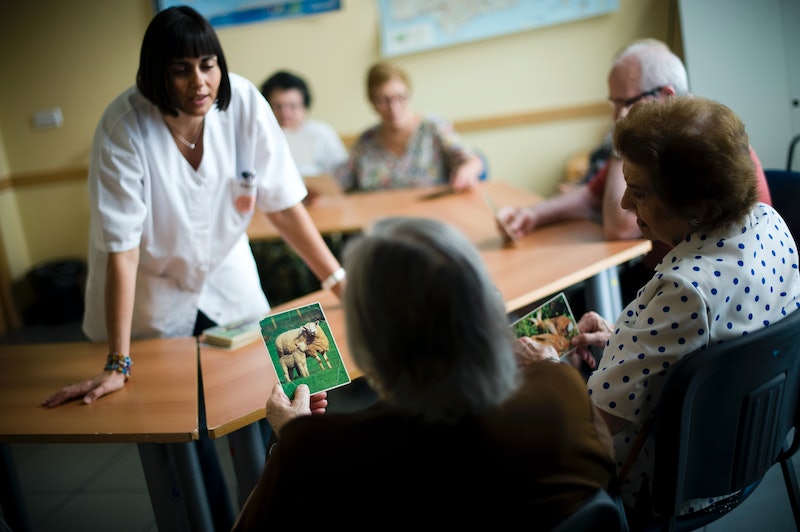 This week, a new report suggests the CDC underestimates the number of Alzheimer's deaths in the elderly — and it's a dramatic difference. The study, published Wednesday in the American Academy of Neurology, estimates that roughly 503,400 Americans over the age 75 died in 2010 from Alzheimer's disease. That's considerably higher than the CDC's estimate, which attributed 84,000 deaths to the disease that same year.

These new figures would put Alzheimer's in the top three leading causes of death among the over-75s, just behind heart disease, responsible for 596,000 deaths a year, and cancer, which causes 575,000 deaths annually. It's well ahead of chronic lung disease, which occupies the fourth spot: 143,000 deaths were attributed to it 2010.

The reason for the huge discrepancy? The method used to determine the cause of a person's death. The CDC records rely on death certificates, but it's a simplistic method that can often completely miss many of the factors that can contribute to a person's death — like long-term Alzheimer's disease.

Alzheimer's is known mainly for causing memory loss and confusion, but the damage it does to the brain can have a huge impact on basic bodily functions like breathing and swallowing. An Alzheimer's patient who has trouble swallowing may have difficulty keeping food out of their windpipe and lungs, which can easily lead to pneumonia. Those with Alzheimer's can also be more prone to fatal falls due to confusion.

Over eight years, researchers tracked more than 2,500 people over the age of 65. At the study's outset, none had Alzheimer's. But by the end of the study, nearly a quarter had developed Alzheimer's, and the disease caused the death of about 400 participants. Researchers used the model to end up with the figure of 503,400 Alzheimer's deaths per year in Americans over the age of 75.

Alzheimer's is a fatal disease with no known cure, and currently affects over 5 million people in the US alone. This number could triple by 2050, according to the Alzheimer's Association. In 2013 the disease cost America $203 billion, and this amount could skyrocket to $1.2 trillion by 2050.

The CDC's drastic under-counting of the fatal effects of Alzheimer's could have a very real impact on those dedicated to fighting the disease. The study's lead author, Dr. Bryan D. James, an epidemiologist at Rush University Medical Center in Chicago, told Newsweek that the diseases perceived to be the biggest killers are the ones that get the most funding. With Alzheimer's down to sixth place on the CDC's list, it's pretty underfunded compared to other diseases.

And funding for Alzheimer's is desperately needed. It's the only disease in the CDC's top-ten causes of death that can't be prevented, cured, or slowed down. To see a significant advancement in prevention and treatment options, researchers needed $2 billion per year over the next 10 years. In 2013, researchers received only $484 million in funding from the National Institutes of Health.

As more and more people come into contact with this devastating disease, either as a sufferer, a caregiver, a family member or a friend, this new research spells out what scientists and Alzheimer's charities have known for a long time: We need to do something about this. Now.

More like this
The Best Eye Creams For Eczema On Eyelids
By Masha Vapnitchnaia
The 5 Best Sand Flea Repellents For Bite-Free Living
By Elizabeth Enochs
6 Pilates Arm Exercises That'll Unwind Tight Shoulders
By Carolyn Steber
Wait, Vabbing At The Gym Is What Exactly?
By Carolyn Steber
Get Even More From Bustle — Sign Up For The Newsletter