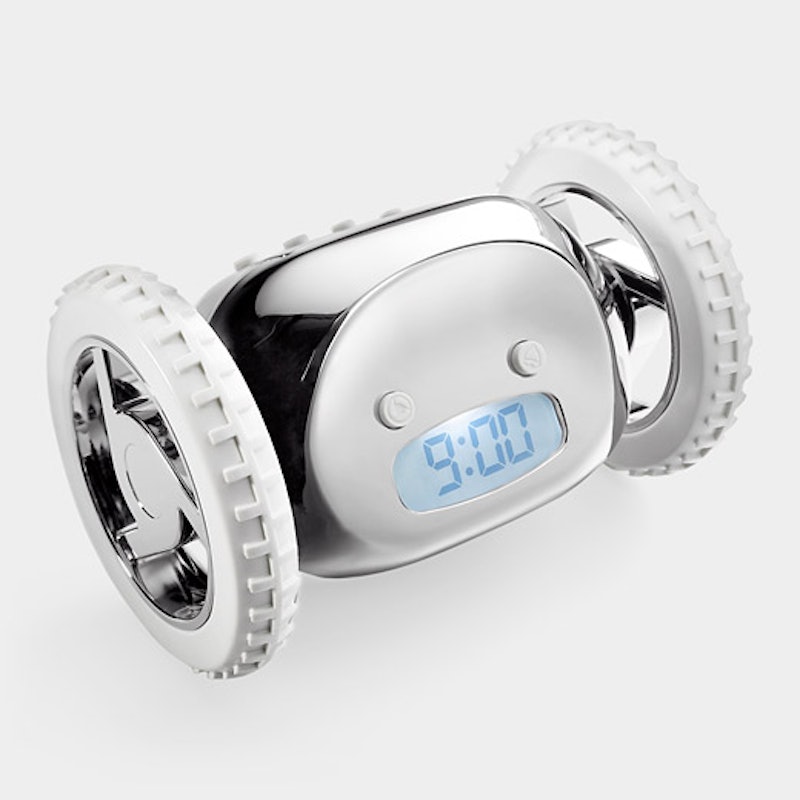 I am no longer responsive to standard alarm clocks. Half asleep, I’ll devise creative ways to stop the sound for good — whether that means turning off the alarm entirely or pushing it to the bottom of my laundry bin and slamming it in the closet. Fortunately, these seven creative (and wildly annoying come morning-time) alarms absolutely refuse to let you sleep in.

OK, this is going to sound super annoying because it will be, especially at 7 a.m. When it's time to wake up, the alarm clock named Clocky will leap off your bed and run away from you, beeping all the while. That's right, you have to chase Clocky down to stop the beeping. Now try going back to sleep after all that wild excitement!

There's nothing like a few morning bicep curls to get the blood flowing. Simply set Wake Up Work Out Alarm Clock for the time you need to wake up. When the alarm clock goes off, the only way to stop the sound is to do 30 "perfect" bicep reps. I have a feeling this would get really old, really fast. But I firmly believe that the most effective alarm clocks are the most irritating ones.

In the same vein as Clocky, the Flying Alarm Clock forces you to get out of bed and run around in order to stop the sound. The top part of the clock is like a helicopter, which flies away when the "loud shrieking alarm" goes off, and you can only stop the excruciating sound by returning the helicopter to the base.

There's nothing like a piece of technology speaking to you in Japanese to wake you up in the morning. Clockman, an alarm clock with a goofy cartoon face, will spew "an assortment of remarks (all in Japanese) designed to get you up and about." Clockman comes in four different colors, with each color corresponding to a different personality type. The yellow Clockman "speaks rough," the pink one "is the politest of the bunch," and the blue one is "a bit of a buffoon."

For all those hardcore Snorlaxes out there, the Sonic Bomb might be your best bet. The alarm is absurdly loud — 113-decibels loud, about as much as a jackhammer — and you can also adhere it to your mattress to activate the accompanying bed-shaker feature. As if that weren't enough, Sonic Bomb also has red, flashing alert lights, so you'll probably think you're under attack.

We recently told you about the Wake Up Vibe, an alarm clock you slip into your underwear before going to sleep. The next morning, Wake Up Vibe wakes you up with pleasing vibrations. The device has six different vibration settings and comes in pink, purple, and black.

This crafty alarm connects to your online bank account. If you decide to snooze, the alarm will donate your money to the organization of your choosing. Set it to an organization you despise for extra wake-up motivation. As they say on their website, "The SnūzNLūz uses the very complex psychological phenomenon known as 'HATRED.'"