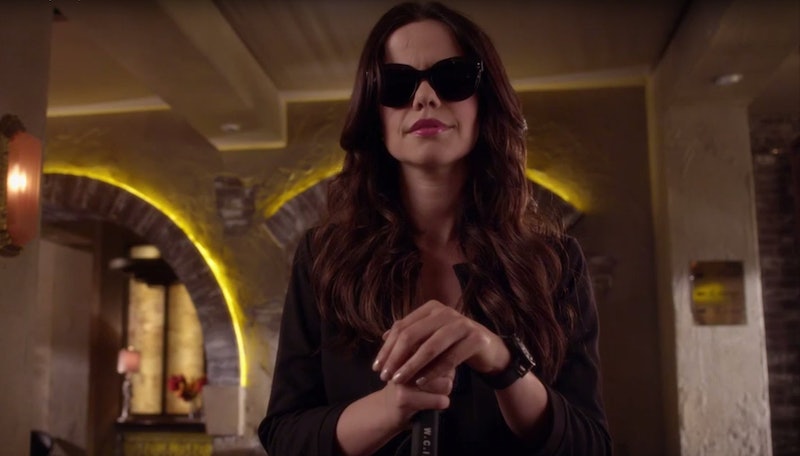 Some things never change in Rosewood, and one of those things is the the sheer amount of shadiness that Jenna Marshall possesses. Though Jenna initially began her Pretty Little Liars arc as a victim of one of Alison's cruel pranks, she's definitely taken back the power she lost — and gotten to a place where she manages to evoke fear in the Liars pretty much any time they hear her cane clack nearby. Five years after the Big A reveal, this hasn't changed — and now, Jenna has returned to Rosewood with one seriously shady agenda. Though the Liars have no idea what the heck Jenna is doing back in town, one Reddit user's theory about the Liars' notorious enemy might explain everything — could Jenna be Charlotte's killer?!

Reddit user Grngtts thinks so, and after reading this fan's theory about Jenna being the killer, I'm moving Jenna way, way up my suspect list. We learned in Season 6B that Charlotte was killed because she was essentially hit with a squared, hollow object in the back of the neck with force. Jenna, who is blind, walks with a cane, and takes it everywhere she goes. Could that be the object that hit Charlotte? It would make a lot of sense, especially considering the show spent a lot of time alerting us to what the object actually looked like. In fact, it's not the only object Jenna is associated with that would make sense as the murder weapon: Jenna also plays the flute, an object that, theoretically, be used for the very same thing. Weird, right?

Grngtts points out that Jenna is also one of the few people in town who has a serious motivation for wanting Charlotte dead. Jenna always seemed afraid of the woman formerly known as Cece Drake, and Shana confirmed that fear after Jenna nearly drowned during a party at a lake house. Now that we know Charlotte was the one who attempted to drown Jenna, it would make sense for Jenna want Charlotte dead — she could have killed Charlotte to make sure that Charlotte didn't try and finish the job. PLL spoiler account That's What -A Said seems to hint that there definitely was bad blood between these two women:

As for the reason why Jenna was seemingly working with Dr. Rollins, there are a few explanations. The first is that Dr. Rollins isn't actually attempting to avenge Charlotte's death — perhaps the only thing he really wanted was Charlotte's money, no matter what the cost. It would explain why Charlotte was so upset at Dr. Rollins dating Alison — she was never in on any plan to get Alison's fortune. The second is that Jenna was double-crossing Dr. Rollins this whole time, and that Dr. Rollins really was out for justice for Charlotte. If Jenna really is a killer, it's doubtful she'd care much about betraying anyone.

Only time will tell if Jenna really is guilty of murder, but that tap, tap, tap of her cane should definitely keep the Liars on their toes.

More like this
Everything To Know About The 'Pretty Little Liars' Reboot On HBO Max
By Mary Kate McGrath and Jack Irvin
The ‘Squid Game’ Season 2 Renewal Teases A Creepy New Figure & A Return
By Brian Anthony Hernandez and Bustle Editors
Everything To Know About Jordan Peele's 'Nope'
By Alyssa Lapid, Morgan Leigh Davies and Radhika Menon
Everything We Know About When To Expect Money Heist: Korea Part 2
By Kadin Burnett
Get Even More From Bustle — Sign Up For The Newsletter