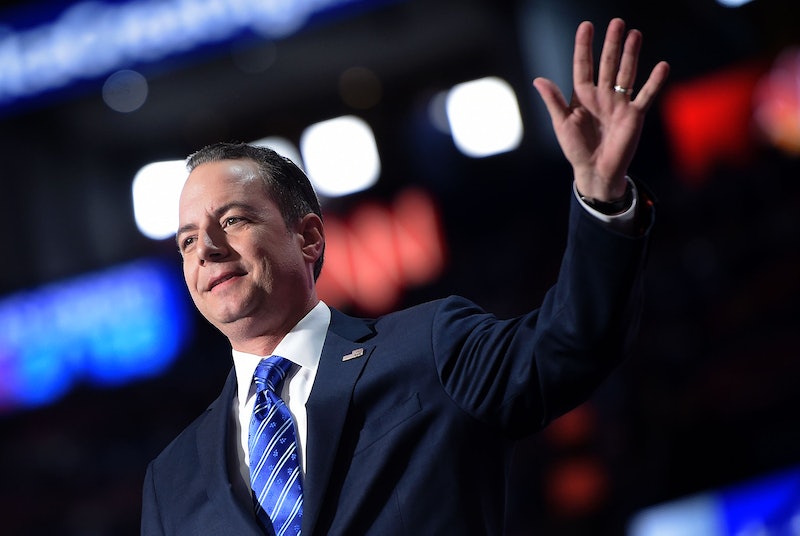 Taking a page out of the Trump campaign strategy playbook, Reince Priebus, chairperson of the Republican National Committee, relied on ad hominem attacks rather than outlining any substantial policy or platforms for the Republican Party. A quick read of the transcript of Reince Priebus' RNC speech reveals an attitude that is heavily reliant on that age old adage that the "best defense is a good offense."

Labeling a Clinton presidency as one that will bring "more debt, more Obamacare, and more hard-working families never seeing a raise," did little to provide insight into what a Trump presidency would offer. Instead, using divisive and partisanship tactics, Priebus also brought up gun rights, a contentious issue for the 2016 election, and avoided talking about bipartisan gun reform or the recent mass shootings, focusing instead on "kiss[ing] your gun rights goodbye" should Clinton become the next president of the United States.

Priebus praised Trump for being able to bring out millions of new voters because of his ability to listen to those "who are anxious." But that ability seems to stop when it comes to children of immigrants, people of Islamic faith, activists from the Black Lives Matter movement or those concerned with their reproductive rights.

The RNC chairperson said that Republicans have better beliefs--a believe in better schools, better healthcare and a better economy. Ultimately a better better. If that's his idea of making America one again, then Priebus may want to go back to the drawing board.

Here's the full transcript of Priebus' speech, as prepared for delivery:

To the people of Cleveland, we say thank you for your hospitality. And to my wife Sally, and my son Jack and my daughter Grace, I love you. Thank you for everything you do for me.

I stand before this Convention tonight as the Chairman of a Party that is carrying the torch of liberty.

We are the party of the open door.

To some people... and some presidents... America is just another country. To Republicans, America is the greatest nation on earth.

We don't apologize for America. We celebrate America.

At every level, Republicans stand for aspiration and achievement. We stand for peace and prosperity.

We stand for freedom and fairness.

These values have inspired people the world-over, ever since we won our freedom over two centuries ago.

These values fueled the sacrifices for freedom at Gettysburg and Normandy and Fallujah.

These values spurred the fight for equality in Birmingham and Selma.

It is clear the Republican Party is the only party willing to fight for these values and lead America to greatness in the 21st century.

You see, the dirty little secret Democrats don't want you to know is that they are the party of the same old thing.

We are the party of new ideas in a world changing faster than ever.

Democrats depend on super delegates and bureaucrats to sneak their agenda through the backdoor.

We are the party of the grassroots. We honor what the voters say.

Democrats want to put labor union bosses in charge of our schools, limit our choices, and feed our kids a steady diet of left-wing propaganda.

We know every child matters and the classroom is not an assembly line. It's time to give power back to parents, embrace school choice, and equip our children with the skills they need for college, career and life.

Democrats want healthcare choices in the hands of politicians.

We want healthcare choices in the hands of patients. Democrats want Washington to impose a one-size-fits-all policy on everybody.

What separates Republicans from Democrats is our belief in better. We believe in better schools. A better healthcare system. A better economy which rewards hard work no matter where or when you punch the clock.

And most of all, we believe in a better chance at the American dream for everyone.

The Republican Party will not stop until it becomes a reality.

And that's why we need to stop Hillary Clinton.

If given the chance, Hillary Clinton will stack the Supreme Court with activist left-wing judges who will treat the Constitution like a doormat. You can kiss your gun rights goodbye if she ever finds her way into the White House.

In foreign policy, a Clinton presidency means forgetting our friends and enabling our enemies.

Just look at her disastrous Iran nuclear deal, which lined the pockets of the world's number one state sponsor of terrorism with your money, while abandoning our greatest ally in the Middle East, the nation of Israel.

It was on her watch ISIS began to spread its wings of evil over the Middle East.

And she has spent the last 16 months looking into the eyes of the American people and lying about how she recklessly jeopardized national security with her secret email server.

She reads ethics rules as carefully as Americans read their junk mail.

Just look at her track record.

She used her post as Secretary of State to grease the wheels for Democrat lobbyists, special interests, and political insiders connected to the corrupt Clinton Machine.

Her family foundation took millions of dollars in donations from countries

For Hillary Clinton, the Oval Office is just another cash cow.

Well, I have one word for all this hypocrisy and corruption. Enough.

Americans have had enough of a government that plays favorites with the well-connected.

Americans have had enough!

This election is our chance to stop it and Donald Trump is the right man to lead that charge.

He's brought millions of new voters into our party because he's listening to Americans who are anxious about a country which has lost its way.

Donald Trump wants to bring jobs back from overseas and hold companies who want to send them abroad accountable.

Working families are the lifeblood of our country, and we can't thrive as a nation unless they are thriving. A lot of them haven't seen a bigger paycheck in a long time.

Donald Trump wants to make sure you can pay the mortgage, put gas in the car, and buy new clothes for the first day of school.

Donald Trump is committed to hitting terrorists hard and making the safety of every man, woman, and child in America his number one priority.

No more negotiating with terrorists. If they want to take us down, we will take them down.

And, he will protect the Second Amendment, and every other right guaranteed in the Constitution, by appointing conservative justices to the Supreme Court.

And he's going to protect the lives of the unborn. So I have a message to America: hold on.

With Donald Trump and Mike Pence, America is ready for a comeback after almost a decade of Clinton-Obama failures.

I want to close by telling you a little-known story of American greatness.

William Nudesen was a Danish immigrant who started out working in a shipyard and living in a boardinghouse. He knew America promised limitless opportunity, and was determined to make the most of it. He developed his talents for industrial engineering and worked his way up at General Motors. By 1937, he had become the President of the company.

In 1940, the government asked him to get America's factories on a wartime footing. Instead of cars and trucks, America's great manufacturers were now proudly making tanks and planes. For this enormous responsibility, Nudesen was paid $1 per year.

He didn't do the job for the money. He was motivated by a duty to keep America free from tyranny. He set aside the job of leading one of the largest companies in America so he could help save the world.

At the end of the war, a war department official told him, "You have never done anything for yourself, only for your country. You have never spared yourself."

Those values are under assault from Hillary Clinton and the rest of the Democrat party. Life, liberty, and the pursuit of happiness is not just a tagline for a bumper sticker.

It is our American legacy, and it is our responsibility to save it and strengthen it for our children and grandchildren.

God put us here not by accident. This is our moment to set a new course for an America as strong and confident as we've ever been.

Let's get to work, expand our Republican majorities, and elect Donald Trump president!

Thank you and God bless America!