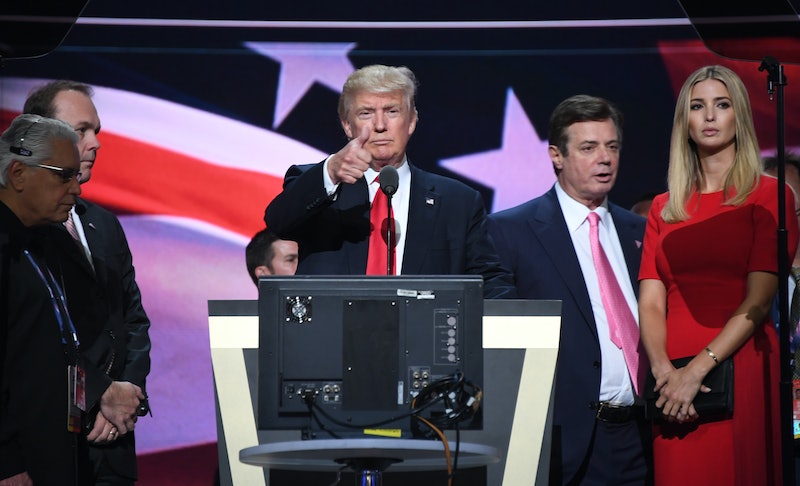 Traditionally, the last night of the RNC has been a time for celebration and hopeful promises for the Republican Party. This time around, however, the recently crowned GOP nominee relied more heavily on highlighting America's fears and problems. The overall theme of Donald Trump's RNC speech was rather dark and gloomy, and its message isn't much better. More or less, he painted America as a doomed nation wrought with violence. Of course, he implied that sad image could change, but only if voters choose to elect him.

Trump began with a cautionary tale and warned the nation that a politician who doesn't understand it isn't fit to be president. Obviously, he's talking about Hillary Clinton — the star of nearly every RNC speaker's speech.

Our convention occurs at a moment of crisis for our nation. The attacks on our police, and the terrorism in our cities, threaten our very way of life. ... Americans watching this address tonight have seen the recent images of violence in our streets and the chaos in our communities. Many have witnessed this violence personally, some have even been its victims.

The apocalypse might be coming. This seems like a great way of encouraging Americans to shut their blinds, lock their doors, and never set foot onto the sidewalk. Some would describe that as fear-mongering. Meanwhile, as people shuttered in their homes, Trump delivered a message that resembled a grim public service announcement.

I have a message for all of you: the crime and violence that today afflicts our nation will soon, and I mean very soon, come to an end. Beginning on January 20th 2017, safety will be restored.

If he wins the general election, safety will be "restored" on the very first day he takes office? Thanks to the frequent partisan gridlocks in Congress, most citizens are aware of the fact that nationwide problems can't be miraculously fixed by a man simply stepping foot into the White House. Spicing it up with some unfortunate statistics on crime in certain American cities, Trump transitioned into a criminalizing anecdote of an illegal immigrant who killed a smart, successful recent college graduate. The story, scarily enough, risks inspiring hatred towards Latino immigrants as a whole.

I have a message to every last person threatening the peace on our streets and the safety of our police: when I take the oath of office next year, I will restore law and order our country. Believe me. Believe me.

Next, Trump moved onto more international concerns, such as radical extremism by ISIS. However, he referred to it as "Islamic terrorism," a generalization that can perpetuate negative stereotypes about peaceful Muslims. His suggestion that Syrian refugees be barred from entering the U.S. doesn't help.

More than once, Trump indirectly associated the nation's problems with specific groups of people, which can lead to dangerous profiling and discrimination. The notions that terrorism can be blamed on a religion practiced by peaceful people or that illegal immigrants are the sole cause of increased crime rates are far-fetched. Most scarily, they rely on fear to work properly.

More like this
Why You're Seeing Green Bandanas At Abortion Rights Protests
By Lexi Inks
Juneteenth Is Now A Federal Holiday — Here's What That Means
By Lani Seelinger and Syeda Khaula Saad
How To Fight For Reproductive Rights, Based On How Much Time You Have
By Courtney Young
5 Ways To Stand In Solidarity With Women In America From The UK
By Sophie McEvoy
Get Even More From Bustle — Sign Up For The Newsletter