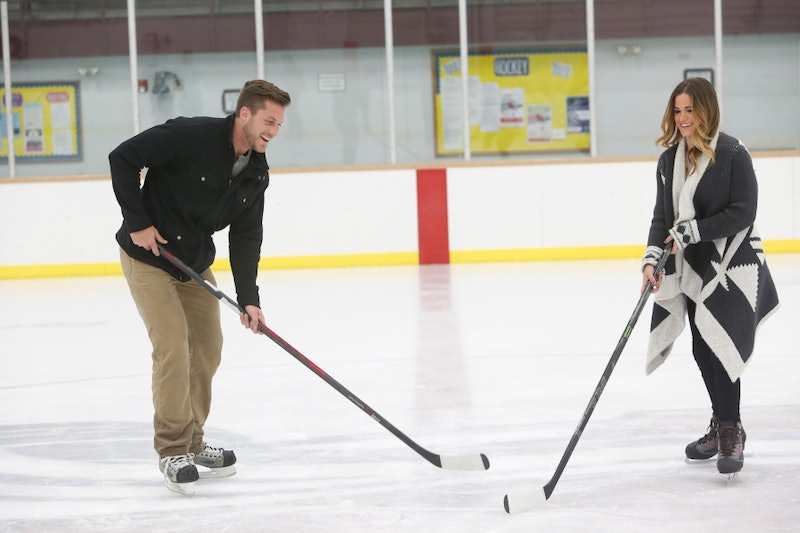 As sad as it is to see the contestants on The Bachelorette fall, we all know it’s coming. After all, four men don’t get to marry JoJo at the end of this — only one does, and, unfortunately, that man is not Chase. JoJo sent him home duringFantasy Suite date, and I’m sure many of you at home are screaming “Why, JoJo, why?” at the television right now. So why did JoJo send Chase home on The Bachelorette ?

JoJo had rocking dates with Robby and Jordan before her date with Chase, so when it was time for her date with Chase, it all seemed pretty lackluster. JoJo was so not even into it that it was actually kind of hard to watch. It also didn't help that Robby popped into JoJo's suite right before her date with Chase to say hello. Sneaky move there, Robby, but it totally worked — JoJo wasn't thinking about Chase when she was on her date with him. JoJo and Chase walked into the fantasy suite, but when Chase said that he loved JoJo, JoJo started having one of her trademarked panic attacks. She told Chase she wasn't feeling it, Chase got mad that he spilled his heart out to her and got stepped on, and Chase left angry. JoJo was upset that he was so upset, but Chase was too angry to deal with her. Later, Chase returned to JoJo to apologize for his behavior and to tell her that he was proud of her for following her heart. Still such a nice guy!

JoJo had a visceral reaction to Chase saying "I love you," and that's pretty much the opposite of what you want to hear as a person saying, "I love you." I think JoJo goes for the bad boys (Jordan), or at least the guys that want you to think they’re bad boys (Robby). She has really electric chemistry with both Jordan and Robby, and while Chase is a really good guy, I just don’t think he was exciting enough for her. Chase has a real job and isn't involved with an ex-girlfriend, so why bother? JoJo, J-J-J-JoJo, if I may, a word of advice — you need a nice, normal guy, just like Chase.

More like this
‘The Bachelorette’s Michelle Young & Nayte Olukoya Explained Their Breakup
By Stephanie Topacio Long
'Bachelor In Paradise' Finally Announced Its Season 8 Release Date
By Kadin Burnett and Grace Wehniainen
Howard Stern's Net Worth: Is He The Richest Man In Radio?
By Hugh McIntyre
Kris Jenner Drunkenly Toasts Khloé Kardashian’s 38th Birthday With This Speech
By Grace Wehniainen
Get Even More From Bustle — Sign Up For The Newsletter