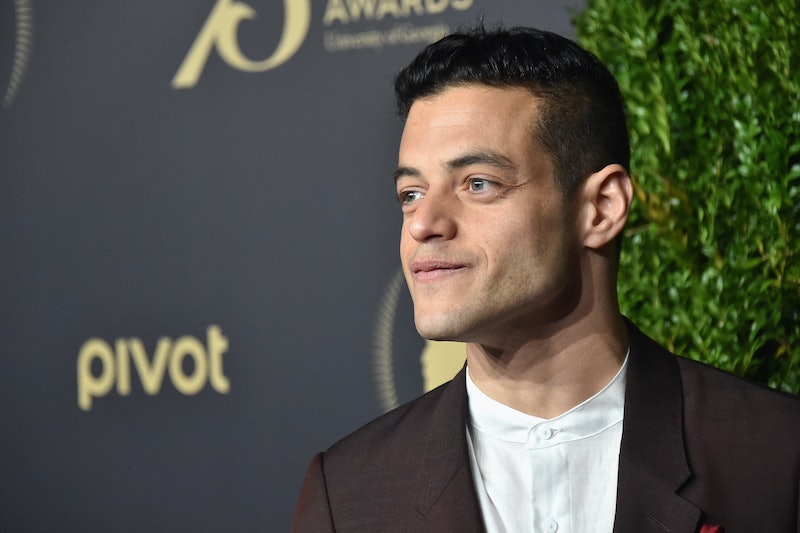 I'll be honest, I watched most of the first season of Mr. Robot and had no idea what was going on, even after reading all the Wiki entries about it. I do know that it was good, and that Christian Slater was in it, but I was, of course, mostly trying to stick with it to keep my eyes on Elliot Anderson, played by Rami Malek. Call me shallow, but have you seen his face? Malek is extremely talented and nuanced in his performance of the depressed, anxious, and brilliant hacker on the USA show, and he's apparently as private in real life as he is in character, so it's incredibly difficult to figure out who Rami Malek has dated. But while trying to figure out who the dreamboat has officially been in relationships with in the past is hard, there are rumors of his past paramours. Where's fsociety when you need them to hack cute TV stars' emails?

Malek, 35, was in the Twilight movies before he was a hacker on TV. In 2012, during the filming of The Twilight Saga: Breaking Dawn — Part 2, fans linked him to co-star Angela Sarafyan, according to Vulture. In the movie, Malek played an Egyptian vampire named Benjamin (hooray, diversity?) whose love interest was played by Sarafyan, who is also part of the Egyptian coven (Twilight was a ridiculous chapter in American history). During press for the film, it was rumored that Malek and Sarafyen were dating IRL, but nothing was ever confirmed by either actor.

Apparently Malek gets linked to whomever his current female co-star is, because now as the star of Mr. Robot, it's rumored that Malek is dating his on-screen friend Portia Doubleday, who plays Elliot's childhood and lifelong friend Angela Mason on the show. On-screen, Elliot and Angela have a complex and mysterious relationship, one that is much dissected and discussed in the Mr. Robot subreddit, and they are totally shipped as a couple on Tumblr. But it seems IRL Doubleday and Malek are nothing more than good friends with great chemistry on-screen. If they are romantically involved, there's no real way to know, because all of Doubleday's Instagram posts featuring Malek are too ambiguous to even tell (but they are so cute).

And, of course, there's no evidence of anything from Malek's Instagram, because that son of a gun has not posted one. single. photo. That's beyond method acting, it's just annoying!

Besides the easy rumors about Malek dating his co-stars, it doesn't seem like there has been much love in Malek's life. At least not publicly. He is on a show about the ultimate protection of privacy, and he might have learned a few tricks. Maybe he's just trying to protect his significant other from the inevitable legion of heartbroken and angry fans who would be extremely disappointed were they to find out he was cuffed up.