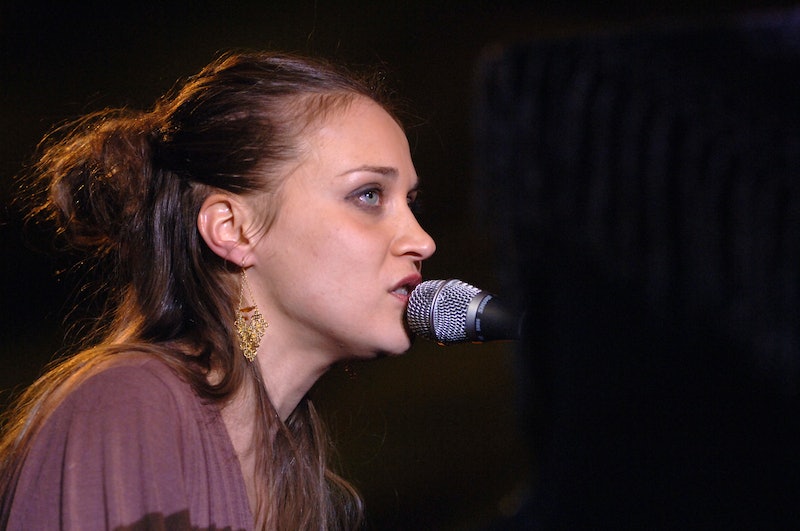 I was 14 years old when I first heard Fiona Apple, and the experience was such a musical epiphany that it's remained etched in my mind ever since. The song I heard was "Criminal," and the video for it showed a young woman who looked only slightly older than myself with a voice that completely betrayed her youth. Being a teenager, I was inexplicably angry about things that I could barely even comprehend — never mind express — and I found myself struggling to find music which I could relate to. Fiona Apple's debut album, Tidal, completely changed that, however. It was heavy with darkness and full of rage, but all of it was simmering beneath a controlled level of startling power — vocals which ached with expression yet discipline, and melodies which could be sumptuous, devious, moving and beautiful all at once. Tidal was a feminist revelation to me — it was a wake up call and a guidebook, making me feel as though someone else precisely understood me and knew how to navigate my everything.

I lived that through album, I etched the lyrics into my very being, I bellowed its melodies when I wanted to scream, and it empowered me to accept my feelings; to embrace them and to work with them. Released on July 23, 1996, it's hard to believe that Tidal is 20 years old today. The album has reappeared back in my life on numerous occasions, probably even on a yearly basis, providing answers and catharsis where everything else has failed. For fans of Apple, Tidal isn't just an album, but instead a musical holy relic, full of the sort of primordial feminist ideas that all young women should learn as they strive to figure out their place in the world.

Aged just 16 when she wrote Tidal (with the exception of "Criminal" which she apparently wrote in 45 minutes, aged 18, at the insistence of her label who wanted a "more obvious" first single), the album shows a phenomenal talent for lyricism and the sort of raw songwriting which remains rare in the pop industry to this day. Tidal opener "Sleep To Dream," for example, provides the sort of mantra of independence that all women who strive to wield complete control over their lives can appreciate. When Apple sings, "This mind, this body/ And this voice cannot be/ Stifled by your deviant ways," it can be taken as a bellow of strength against a hurtful lover but also as a war cry against the patriarchy, as a whole. It's a line that says, I belong to me and your attempts to change or restrain me will fail. The rest of the song shrieks out in victorious empowerment as Apple rejects the hapless muse of her song for her own freedom and piece of mind:

She owns her hurt and she takes responsibility for it — she'd rather face up to reality than to live her "head in the clouds," no matter how painful that reality may be for her. Tidal is full of songs which strive for awareness, acknowledgement and accepting responsibility for everything you feel and do.

On "The First Taste," Apple demands that her crush acknowledge her feelings and act on them. She isn't submissive in waiting for him to make a move, but actively commands him to do it, saying: "I do not struggle in your web/ Because it was my aim to get caught/ But daddy longlegs, I feel that I'm finally/ Growing weary of waiting to be consumed by you."

"Shadowboxer," on the other hand, sees Apple accepting that she's made a mistake of allowing an ex-boyfriend to remain friends with her and play her for a fool. However, she recognizes his malice and speaks out in refusal of being a victim to it:

But, oh, it's so evilMy loveThe way you've noReverence to my concernSo I'll be sure toStay wary of you, loveTo save the pain ofOnce my flame andTwice my burn

But that pain can both ways. As "Criminal" shows, Apple also acknowledges her own capacity for devious plays of romance which sees her refusing to play the innocent party. The opening lines of the song openly own her own romantic mischief, with the vocal lines expressing a grimace of overpowering sexuality: "I've been a bad, bad girl/ I've been careless with a delicate man/ And it's a sad sad world/ When a girl will break a boy just because she can." She's fearlessly dominant with her sexuality in the song, even though she shows remorse for how she's used it.

As a teenage girl, this was a radical idea to me. My whole life I'd been taught that my sexuality was something which could only harm me if used inappropriately — I was never taught of it's power, pleasure, or command. And even though the power in this instance turns out to be a destructive one, it was an empowering notion all the same and one which I grew up to relate to as I found myself unintentionally dragging lovers through the wringer for my own gratification. It's a mistake many people can relate to, and intentional or otherwise, we all have the capacity to do bad things to people who don't deserve it (and feel terrible for it afterwards).

But the album has more to offer than just anthemic feminist lyrics or complex insights into relationships and how they can impact on your very being. The song "Sullen Girl" is as intimate and honest an expression of trauma as you may ever hear in music, which sees Apple exploring, in part, the mental after-effects of sexual assault. As was reported by Rolling Stone magazine in an interview with the artist in 1998, Apple was raped at age 12 in the corridor outside her mother's apartment. She wasn't publicly open about the experience until an Italian journalist reportedly asked her whether the song was about a boyfriend leaving her, which it wasn't. Apple told Rolling Stone:

As such, though nuanced and delicate, "Sullen Girl" is full of strength and determination alongside restlessness and sorrow. But at the songs core is an empowering acceptance of what's happened to her and a resolve to find a way through it all. Though she says, "I used to sail the deep and tranquil sea/ But he washed me shore/ And he took my pearl/ And left an empty shell of me," she follows the heartbreaking verse up with purpose, showing her accepting her sadness and using it to work through the experience: "And there's too much going on/ But it's calm under the waves in the blue of my oblivion." Through sorrow, she finds peace.

As a victim of sexual assault in my 20s, this song went on to became more powerful to me than I could ever imagine. Apple was right, burying the experience did nothing to ease the effects of it, and it was only through submerging myself in the pain of it all, exploring it and working through it, that I was able to come out through the other side and feel like myself again.

Tidal continues to be a tremendous inspiration, a well of strength and a true source of power. Apple's unapologetic honesty and prowess for throwing every facet of her self into her music is evident on all of her albums, but none quite as visceral or primitive as Tidal remains to be. Not only has the album aged magnificently in the 20 years since it was released, but it remains a musical masterpiece of feminist strength and empowerment. It commands the listener to seize their own feelings and to be empowered by them, no matter how painful. And that's a sentiment that I'm sure we'll still be celebrating in another 20 years time.

More like this
10 New Must-Read Books Out This Week
By K.W. Colyard
'The Walk-In' Revisits A Terrifying Real-Life Murder Plot
By Sophie McEvoy
'MAFS UK' Changed The Rules After Matt & Whitney Cheated On Their Partners
By Catharina Cheung
What Is A "Hot Girl Book" & Why Is Everyone Talking About Them?
By Samantha Leach
Get Even More From Bustle — Sign Up For The Newsletter