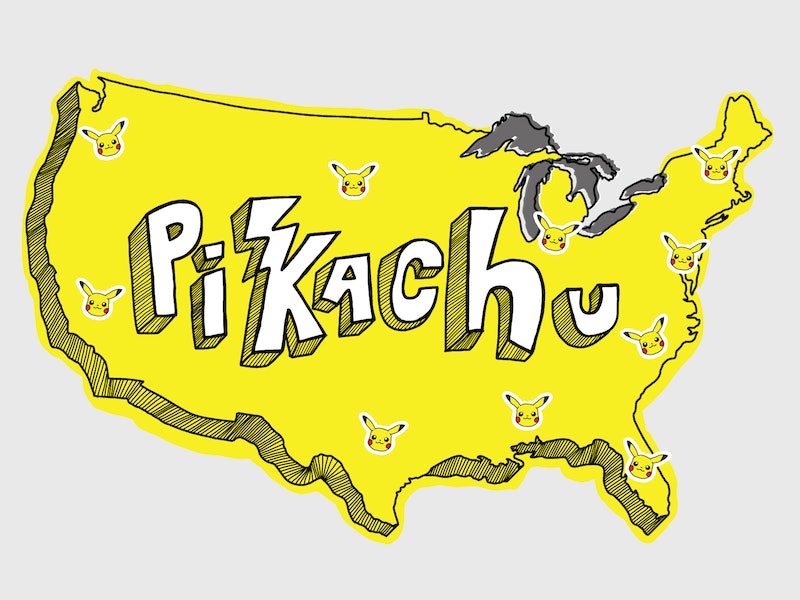 When I was a kid, all I wanted was my own Pikachu — and it seems like I'm not the only one. Ever since "Pokemon Go" came out, much of the chatter I've heard about the augmented reality game has to do with where you can catch Pikachu. It makes sense, too. If you've spent even a minute watching the Pokemon anime, you know that one of the show's most memorable characters is an adorable yellow creature named Pikachu. This big-eyed electric mouse is Ash Ketchum's first Pokemon, and he's the whole package: he cutely chatters away in Pikachu-speak while sitting on Ash's shoulder, but he can also take down other trainers' Pokemon by unleashing mini-bolts of lightning from his little red cheeks.

There's still a lot we don't know about the mechanics of "Pokemon Go." That is, it seems as though certain Pokemon are more likely to be found in certain locations (rock and fire types are out where it's dry and hot; water types are by the water... shockingly), but are spawn points fixed? If you find a rare Dratini outside the coffee shop one morning, will it appear there again? And where are electric-type Pokemon such as Pikachu more likely to appear, anyway? Some people have hypothesized that electric Pokemon will show up on your screen when you're around power plants and cell phone towers, but that seems dangerous, not to mention too difficult. (When was the last time that you hung out near a power plant?) Just from anecdotal evidence about Pikachu, it seems like the fairly elusive Pokemon does stick to certain areas. One of my friends told me that he's reliably caught Pikachu after Pikachu along the shores of the James River in Richmond, Virginia, but hasn't found it anywhere else.

In order to help pin down Pikachu's location in some of the biggest U.S. cities, Bustle made a map of Pikachu sightings in Boston, New York, San Francisco, Washington D.C., and Los Angeles. I culled data from crowdsourced maps created by several different crews of programmers. Pokemapper is an OpenRide-sponsored map that marks Pokemon sightings all over the world. Gotta Catch 'Em All is Boston-specific, but has lots of verified data for the Boston metro area. Pokecrew is another worldwide map, but most of its sightings are in North America. Poke Radar is now an Android and iOS app that adds map pins of certain Pokemon that you specify. (A word of caution: I mined the addresses below directly from these map applications, but most of the maps have been plagued by outages due to stampedes of traffic. If you try to use them to find other Pokemon, you may discover that they're not working at that moment. Just wait an hour or two and check back!)

Note that these maps don't guarantee a Pikachu spot for you if you head to one of the marked locations, but it's better than blind luck! Let us know what you find, and may the odds be ever in your favor!