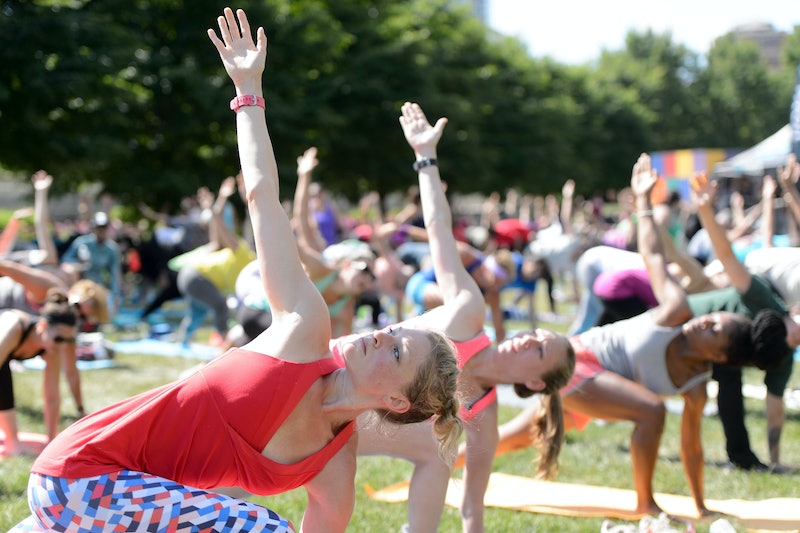 Even if you don't spend your workouts counting down the minutes until you can collapse into a sweaty heap on the gym floor, exercise takes a substantial amount of dedication. Fortunately, all those hours you've spent working out pay off in more than just a healthy body — according to recent research, exercise could improve your willpower in areas of your life outside the gym.

There's a reason athletes are praised for their dedication. Exercise is hard, and it takes self-control to continue working out when you could be watching TV upside down on your couch back home. In a study published in PLOS ONE, a group of primarily Australian researchers examined the relationship between physical activity and "inhibitory control," aka willpower. To do so, they rounded up 11 professional cyclists and nine recreational cyclists and asked them to complete two tests: An easy cognitive task and the more difficult Stroop test, which required participants to quickly identify the color of a word. The catch? The word spells out a different color — for instance, "green" would be written in blue. Because you have to suppress your initial inclination to name the color that's written, psychologists often use the Stroop test to measure self-control.

Here's where it gets interesting. Researchers found that professional cyclists didn't just outperform the recreational cyclists; they also perceived it to be easier, with "no significant differences in perception of effort and time trial performance" between the easy task and the Stroop test. As a final indignity, professional cyclists also performed better on a bike test.

Basically, professional cyclists exhibited more self-control, and their brains didn't tire out as quickly as recreational cyclists. Unfortunately, there's no way to tell whether exercise causes these results; it could be that people who naturally possess such characteristics are drawn to the sport. It's also worth noting that with just 20 participants, the study was rather small.

That being said, exercise's connection to mental health is well-established. Previous research has shown that it can alleviate a bad mood, improve memory and concentration, and improve your ability to handle stress. I guess that's worth the agony of running a few times a week.