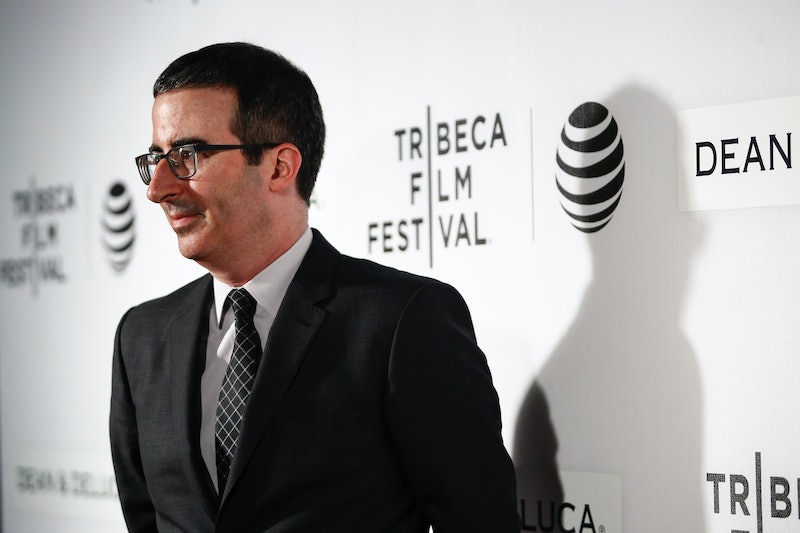 After a few weeks off, John Oliver's hit show Last Week Tonight returned on Sunday, the eve of the Democratic National Convention (DNC) in Philadelphia. This year's presidential election has given Oliver some particularly dramatic and joke-worthy material to work with. Come November, though, the election will be no laughing matter — so whose side is the comedian really on? The question of whether Oliver is a Democrat or Republican is complicated by his U.S. residency status.

Throughout the presidential primaries, Oliver seemed to aim his comedic wrath squarely and most forcefully at the Republican Party, and particularly, Donald Trump. In response to Trump's "Make America Great Again" campaign, Oliver launched a "Make America Drumpf Again" campaign of his own, selling imitation hats and using the grandeur and over-the-top antics that made Trump so newsworthy. He has also done segments on the border wall that Trump hopes to build and the abortion laws that Republicans hope to preserve.

That's not to say that Oliver hasn't made jokes about the Democrats' side of the race. For instance, he called out Hillary Clinton for misrepresenting the Reagans' role in HIV/AIDS advocacy. He criticized both Clinton's and Trump's use of Twitter, while also pointing out that there are much more important things to be talking about than Twitter.

It's safe to say that Oliver will find humor in any political drama, regardless of party. But for someone who makes a career out of commenting on U.S. elections, there's an ultimate irony: Oliver won't actually be able to vote in the upcoming presidential election.

In October, Oliver was a guest on Stephen Colbert's Late Show. When Colbert asked him about voting, Oliver replied that he's unable to vote because of his lack of U.S. citizenship. (In case you missed it, Oliver is British.)

No I can’t [vote]. It’s taxation without representation. You got all pissy about it when we did it.

Rather than a citizen, Oliver is a permanent resident of the U.S. In other words, he can live and work in the States legally, but he cannot vote in federal elections. If he were a citizen, which candidate would he vote for? That's a completely different can of worms — and it's probably not fair to speculate.

Oliver might love to poke fun at the American way of electing presidents, but he has at least some reason to appreciate it. In 2008, he met his now-wife Kate Norley at the Republican National Convention (RNC). Norley, an Army veteran, was at the convention advocating for a veterans' group, while Oliver was there to report for The Daily Show. He'll probably have much more ridiculous things to say about this year's RNC in his Sunday-night recap than he did that year.