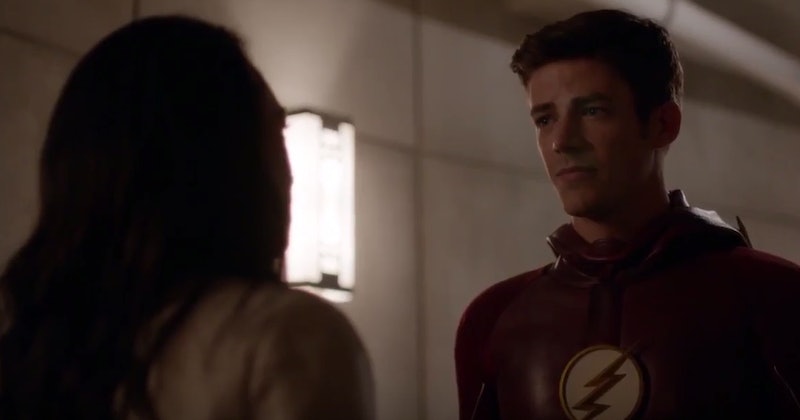 I'm going to need to sit Barry Allen down and give him a very stern, very real talking to because of what was just revealed about Season 3 of The Flash at San Diego Comic Con. As fans already know, despite all of the lessons Barry supposedly learned about letting go and accepting your losses, he went and undid the most major loss he experienced in his life, that of his mom, Nora Allen, by going back in time, again, and finally saving her. While it may have seemed like a good plan to Barry, The Flash's Season 3 sizzle reel shows that it was, as we all suspected, the worst decision ever. You know, considering he changed the entire timeline of his life and everything, a phenomenon we can just more succinctly call "Flashpoint." Special shout out to Reverse Flash for breaking the fourth wall with the name drop, but exactly what did the Flashpoint Paradox change on The Flash ?

Before the sizzle reel, we fans weren't certain about what exactly Nora's un-death would alter. But, oh man, does it alter practically everything — which, yet again, is something Barry probably should have taken into consideration before smooching Iris and running. By the way, I'm still salty over that. You know what, though? That's OK. The Flashpoint Paradox is making sure Barry gets his karma for baiting both fans and Iris. And at this point, it only seems fair.

Iris isn't the only one who is changed by Barry's major decision, though. Here are some things Flashpoint changed on The Flash:

Barry Is No Longer An Orphan

Because in this timeline, the two didn't grow up together. In fact, Iris can barely remember who Barry is at all. So much for childhood BFFs, sheesh. But, as the trailer goes on, Iris does become privy to the strange situation at hand.

Cisco's A Jerk With A New Hair-Do

Oh, and he's also "The richest man in America." Do I sense an Earth-2 version of Cisco?

Joe Is Not Buying What Barry Is Selling, Like, At All

It's as if Joe's Flash Season 1 and 2 timeline-self knows on some level of consciousness what a dumb decision Barry has made and is punishing him for it. Which I honestly hope is happening.

He Has To Deal With Reverse-Flash Again

*Rolls eyes* On the bright side, Reverse-Flash knows a thing or two about messing with timelines, so he does tell Barry that Flashpoint is a "mirage." So, I guess that means there's a light at the end of the tunnel. But can we trust Reverse-Flash at all? Eh, I don't know...

Wally Is A Metahuman

Maybe Barry will really learn his "stop playing with the timeline" lesson once and for all, now.