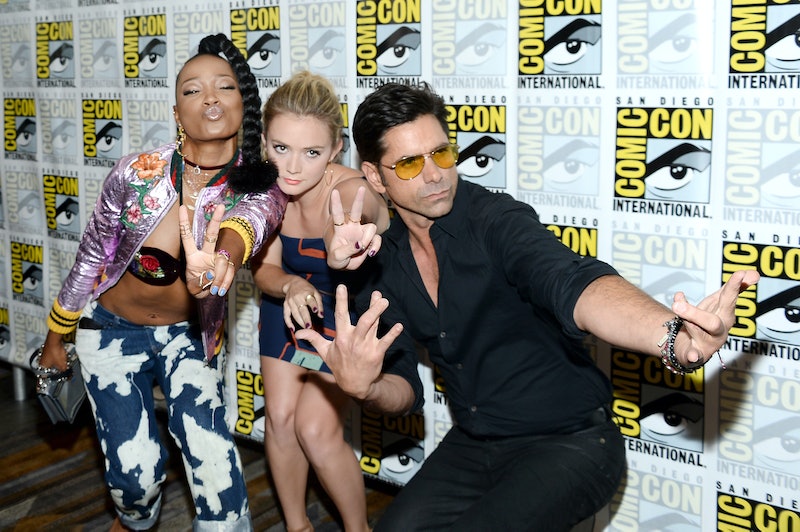 Geek chic is at an all-time high, and the celebrities who took to Comic-Con are a great example as to why. Usually, most celebs don't let their freak flags fly, opting for fun and wearable clothing rather than comic-inspired costumes. But the celebrity outfits at 2016 Comic-Con were a welcome surprise, as most celebs took risks on the red carpet by wearing fun prints, shorter hems, and altogether funkier attire.

Whether you are more geek than chic or vice versa, the rich and famous at Comic-Con 2016 have got you covered. From Emma Roberts’ leopard print pantsuit and pumps to Cara Delevingne’s sequined army print pants and Kristen Bell’s Minnie Mouse graphic tee, the fashion was cooler than that of an MTV awards show. Although there were a few celebs who stuck to their signature looks (sometimes you just know what you like), the Comic-Con red carpet was, needless to say, full of sartorial surprises.

While I love a good Oscars gown now and again, there is something about the Comic-Con red carpet that is just so refreshing. If you want to see celebrities channeling their finest and freshest styles, then scroll down to see the 19 best looks from this year's Comic-Con.

While this look is somewhat conservative for Zendaya, I'm loving the high slit and floral details on her dress.

Cara Delevingne debuted her shorter 'do at this year's Comic-Con in the coolest camo pants I've ever seen and a T-shirt and blazer combo.

Margot Robbie wasn't messing around in sky-high combat boots and an asymmetrical dress.

Shailene Woodley was geek chic at its finest in a matching two-piece and Oxfords.

Keke Palmer brought the fun to the Comic-Con red carpet in platform heels and a metallic bomber.

Willa Holland looked dapper in a pair of striped pants and loafers.

You can never go wrong with sequins.

Lea Michele opted for a low-cut cream dress and plexi pump heels at this year's Comic-Con.

Lupita Nyong'o's braided bun and zip-up dress were both casual and cool.

Because what's more fun than a jumpsuit?

The Spider-Man: Homecoming actor has style in spades.

Anna Kendrick looked like a superhero in a form-fitting gray dress accessorized with a studded belt.

You can always count on Comic-Con for some fresh outfit inspo.