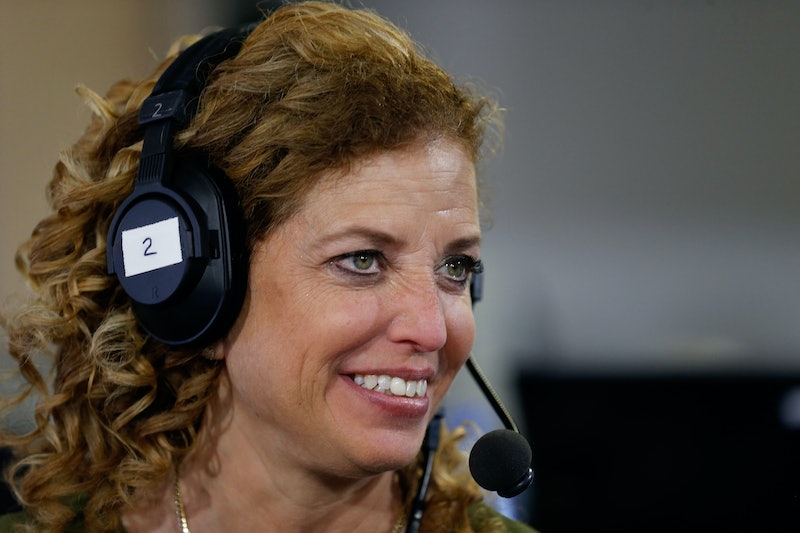 Amid allegations of internal bias by the Democratic National Committee, Chair Debbie Wasserman Schultz resigned the day before the party's convention kicks off. And who will replace Wasserman Schultz as DNC chair? At least for now, there will be an interim chair until officials can decide on a permanent replacement.

Wasserman Schultz released a statement Sunday acknowledging that she would resign, but there was an important point — she won't do so until after the convention is over. According to The New York Times, the statement read, "I know that electing Hillary Clinton as our next president is critical for America’s future. I look forward to serving as a surrogate for her campaign in Florida and across the country to ensure her victory. Going forward, the best way for me to accomplish those goals is to step down as Party Chair at the end of this convention.”

DNC Vice Chair Donna Brazile will step in as interim chair for the remainder of the election, a role she knows well, as she previously served as the interim chair in 2011. Brazile said Sunday morning that she had apologized to Bernie Sanders' campaign over the email leak.

However, it's Ohio Rep. Marcia Fudge who will be serving as the convention chair. The ceremonial role will require Fudge to gavel in the beginning of the convention and close it as well. Fudge was reportedly recommended by Clinton for the position.

But this doesn't mean Brazile or Fudge will be the permanent replacements for the Committee. In fact, CNN reported that the official replacement could very well be Housing Secretary Julian Castro, a name that was often mentioned when talking about possible vice presidential picks for Clinton.

Generally, to select a new chair, the president — if they are of the same party — will name a successor. President Obama appointed Wasserman Schultz to the position in 2011. However, the names of those potential successors are identified by members of the DNC Rules Committee. According to a Medium post by the Democratic National Convention's account, one of the Rules Committee's responsibilities is recommending "individuals to serve as the Permanent Officers of the Convention, including the Chair, Secretary and Co-Chairs."

It's not totally clear yet who will replace Wasserman Schultz or when, but it's worth noting that when Brazile served as interim chair in 2011, she served for only one month, so it's likely we could hear the name of the new chair sometime very, very soon.