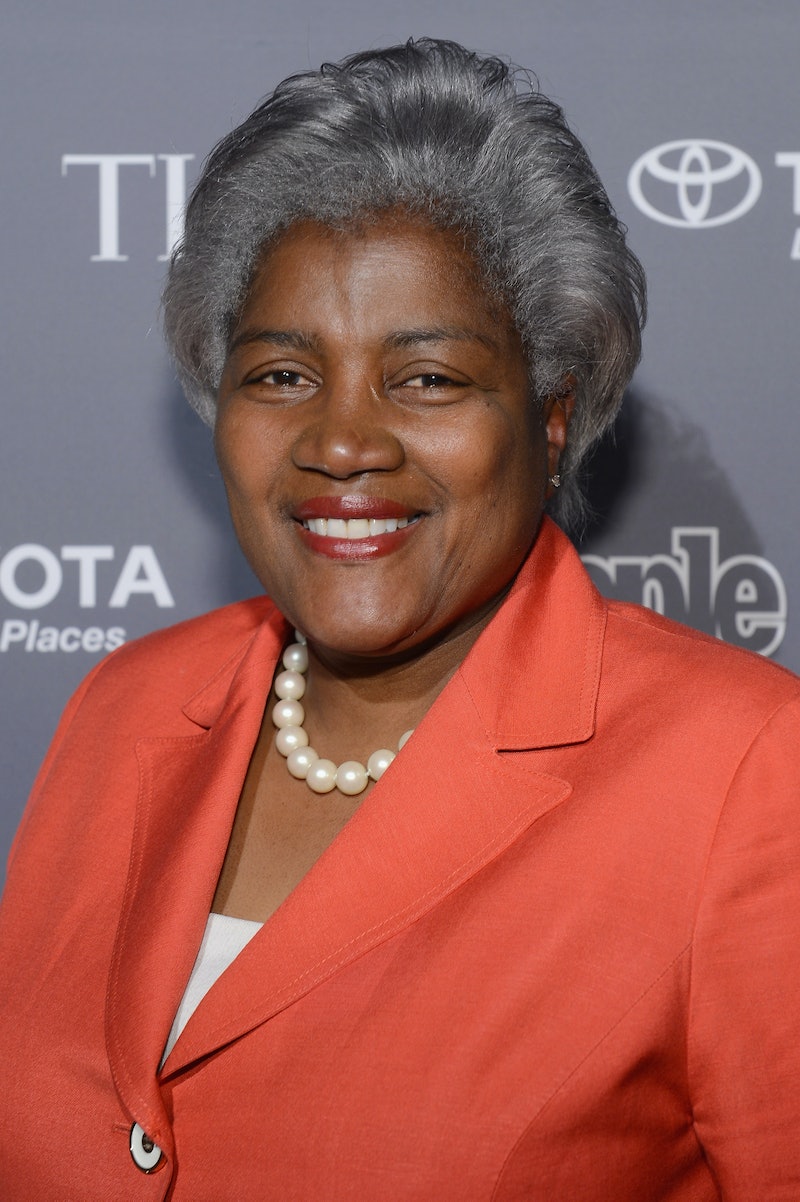 It all happened rather quickly, despite Bernie Sanders having called for this ages ago. Over the weekend before the party's convention, emails were leaked that claimed to show bias by the Democratic National Committee and its chair, Debbie Wasserman Schultz. Sunday morning, she announced that she would resign after the convention. Tucked into that announcement was news that DNC Vice Chair Donna Brazile would become the interim chair, at least for the time being. Bustle has reached out to the DNC for comment.

Brazile will take over the position assumably on Friday, when the convention has concluded. And the most interesting part is that this is a role she's held before — and it had to do with Tim Kaine, Hillary Clinton's vice presidential pick, because American politics is a very small world.

In 2011, Brazile served as the DNC interim chair after Kaine stepped down from the job to run for Senate in Virginia, an effort in which he was ultimately successful. At the time, Brazile was a member of the DNC, and she served as interim chair for about a month before Wasserman Schultz took the position. Now that she's back, many people are thrilled with the decision, touting Brazile as a no-nonsense leader who is more than suited for the role.

According to a USA Today profile from 2000, Brazile was the first black woman to manage a major presidential campaign. She managed Al Gore's presidential campaign beginning in 1999. Before that, she had advised several other politician's campaigns in various ways, including Rev. Jesse Jackson, Gov. Michael Dukakis, and the 1992 Clinton-Gore campaign.

Her personal website states that, other than serving as interim chair, her service for the DNC has included serving as the chair of its Voting Rights institute as well as the vice chair of Voter Registration and Participation. She is an adjunct professor at Georgetown University, and she's written a book called Cooking with Grease: Stirring the Pots in American Politics and contributes to several magazines and television stations, including CNN and ABC.

Brazile said Sunday that she apologized to the Sanders campaign for the DNC emails. Sanders, for his part, called for leadership that "must always remain impartial in the presidential nominating process, something which did not occur in the 2016 race." And while Brazile will likely provide that, at least for the time being, she may not be the permanent replacement. Who will replace Wasserman Schultz for good, not just in the interim, still remains to be seen.